With virtual racing, runners complete the distance on a day of their choosing in a particular window usually over a few weeks
Sep 16, 2020 9:25 AM By: Canadian Press 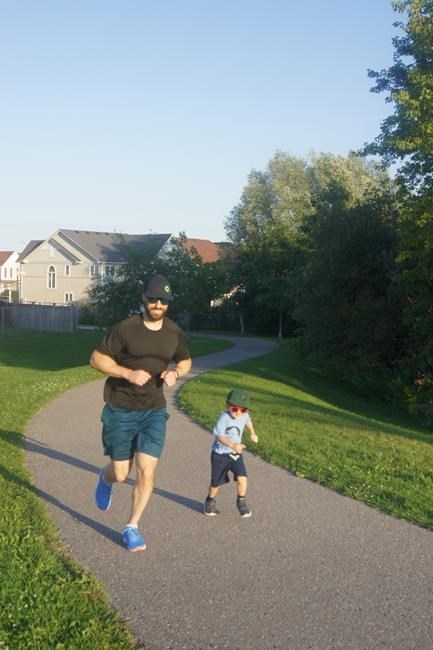 TORONTO — Jeff Clarkson wasn't a runner when COVID-19 shut down recreation and fitness facilities in March.

The 36-year-old was refereeing a Tier 2 junior hockey game when he received an email in the second intermission. Hockey Canada, it said, was shutting down operations across the country immediately.

With just a stationary bike and no weight equipment at his home in Oshawa, Ont., the 36-year-old laced up his running shoes and headed outdoors. Mere months later, with traditional road races not an option, he has become one of many finding a new running outlet with virtual racing.

"I thought 'You know what? I'll start running and I'll just work my way up," Clarkson said. "I think the first run I did was about 4K.

With virtual racing, runners complete the distance on a day of their choosing in a particular window usually over a few weeks. There's no requirement to run the actual race course. Runners track their times via Garmin or another track device then upload it to Race Roster, a London, Ont.-based event management company.

Clarkson was part of a running boom sparked by the novel coronavirus. People were looking to escape the confines of self-isolation at home, and searching for ways to exercise. Asics was among the global sporting goods companies that reported record shoe sales in the first few weeks of the pandemic.

"They're calling us all the time because they're not sure what shoes to wear, and those types of things," Brookes said. "It's exciting to see people getting out and getting active, and finding that outlet that existing runners already knew about of the mental health benefits.

"It is so exciting to see how many people have embraced it through this difficult time."

Canada's road racing season was about to begin when COVID-19 hit in March. The early days were tough, Brookes said. Governments had banned large gatherings. How could road racing possibly survive?

Brookes said the drinking game joke early on was drink each time someone said "pivot."

And pivot, they did. All eight of the Canada Running Series races across Canada are being held virtually. The first was the Under Armour Spring Run-Off, the early-April race through Toronto's High Park that traditionally kicks off the season. The virtual "race" sold out with 2,000 runners.

Clarkson did the Spring Run-Off, placing "somewhere in the 40 to 60 range" for his age group. He's registered for the Oasis Zoo Run 10K, which he must complete by Sept. 30, and he entered his son Logan, who's three, in the 800-metre Cub Run. He's also registered for both the Scotiabank Toronto Waterfront half-marathon and 10K.

His wife Kari, who's due with their second child in October, will join him in races next year.

Brookes, meanwhile, is registered for The Whole Shebang — 5K, 10K, half-marathon and marathon — which is new this year, since virtual racing allows for the runs to be spread out.

"It could actually be the perfect transition opportunity into the world of racing," Van Buskirk said. "Because a start line might be intimidating for some people who are just getting into running, or really committing to a full training plan might be a bit daunting.

"But if they've been running for the last few months, just because that's the only thing they can do, why not register for a virtual 5K and get a finisher's medal and feel like you really accomplished something?"

Many runners had already paid their registration fees when COVID-19 cancelled live races. Brookes said runners were given three options: either receive a full refund, defer their registration to next year, or transfer it to the virtual event.

Registration for most virtual races comes with the usual swag bag including race T-shirt and medal. The medal for the Scotiabank Vancouver Half-Marathon and 5K doubles was particularly popular. It doubles as a bottle opener.

The message to entrants was: "Like going and getting that cup of coffee at the local coffee shop, join us virtually, support us, let's do this together through what's going on," Brookes said. "And we also donated a portion of their entry to the charity of their choice."

"It's a really nice way to dip your toe into what this running thing is," Brookes said.

Van Buskirk recently did the Virtual Special Olympics PEI 5K Race, hosted by NHL player Dion Phaneuf and his wife — Canadian actress Elisha Cuthbert. The couple usually hosts a fundraising gala that pays for most of the province's Special Olympics program each year, but went with a virtual race this summer.

Fundraising is a huge part of road racing. The Toronto Waterfront Marathon alone has 150 charity partners, and last year, through its Charity Challenge, raised more than $3.6 million.

The Spring Run-Off raised money for The Princess Margaret Cancer Centre in Toronto. Fred Mathewson, who was diagnosed with prostate cancer last summer and underwent surgery at the Princess Margaret in January, was the top fundraiser, bringing in more than $11,000. Most of it came from donations from his Rogers Communications colleagues.

Mathewson and his wife Rhona and their adult sons Jake and Hayden also completed the actual mapped out course in High Park. Fred and Rhona walked — "I think we might actually have had the worst time," Fred laughed — while their two sons ran.

Mathewson's cancer diagnosis, and then completing the event, has led to a "mind shift." He can't run because of bad knees, but has taken up power walking in his new Under Armour shoes he won as the top fundraiser. His wife ran sporadically, but now does so more frequently.

"It's all been pretty much spurred on by obviously my health but also the participating in the Spring Runoff, whether the race was virtual or non-virtual we would have continued to do it," Mathewson said.

The entire family works from home. Getting outside has been key.

"Personally I'm in better shape now than I was before COVID," Mathewson said. "I've been working out more frequently, doing the power walks. I've been eating better.

"It's definitely been a change in lifestyle and a change of mindset. And to keep yourself not only healthy in body but also healthy in mind, you need to get outside."

The CIBC Run for the Cure, which is independent of the Canada Running Series, will be held virtually on Oct. 4. Almost 15,000 runners have registered to date. Tanya Henry, vice-president of signature programs at the Canadian Cancer Society, said she expects final registration numbers to be about half what the annual live races, held in 56 cities across Canada, usually draw.

The event raised just under $17 million last year for breast cancer research and support. Henry said this year's event is on pace to surpass its goal of $8 million.

"There's a lot of financial instability in people's lives right now, and the fact we're on track to come in above $8 million is really incredible in a time of great uncertainty around the world," she said.

Alan Brookes, the executive race director and president of Canada Running Series, and Charlotte's dad, said maintaining a community for runners was front of mind when they pivoted to virtual racing.

"That's been the big challenge for us, to try and sustain our community, support our running community during this unprecedented time," he said.

The operations staff has even been hand-delivering packages by bike around Toronto. Charlotte and a colleague biked 45 kilometres for a recent delivery.

"So, it's been a whole effort to try to substitute in the digital space what we can to give people goals, to inspire people, to motivate, to try and keep the community whole until we come through the other side," Alan Brookes said.

The virtual runs have allowed Canada Running Series to keep its 17 full-time employees across the country.

Alan Brookes said even when live racing returns they'll likely maintain a virtual component. The virtual races have drawn runners from as far away as Europe and Australia.

"In some ways our universe has contracted," he said, "but in some ways it's expanded."

This report by The Canadian Press was first published Sept. 15, 2020.

CANADA: Prof says food banks should be eliminated, Basic Income implemented post-COVID-19
Sep 27, 2020 9:25 AM
Comments
We welcome your feedback and encourage you to share your thoughts. We ask that you be respectful of others and their points of view, refrain from personal attacks and stay on topic. To learn about our commenting policies and how we moderate, please read our Community Guidelines.