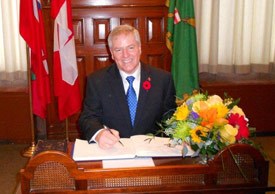 Jim McDonell was born and raised on a dairy farm in Glengarry County. After graduating in Mechanical Engineering from Queen’s University, he worked with Bell Canada for 32 years in planning, engineering and supervisory roles. Jim has been actively involved in the community for over 27 years, dedicating his time to the Williamstown Fair, the Char-Lan Minor Soccer and Minor Hockey Associations, the Glengarry Kinsmen Club, and the Glengarry Border Hockey League. Jim and his wife Margie live in South Glengarry Township where they raised their family of three.

Jim served 3 terms as a municipal councilor in Charlottenburgh and South Glengarry Townships, and was elected Mayor of South Glengarry in 2003, 2006, and 2010. He sat on many committees and boards, including serving as the Warden of the United Counties of Stormont, Dundas and Glengarry, the Chair of the Eastern Ontario Health Unit, and the Community Futures Development Corporation. On October 6, 2011, Jim won the provincial election for the Progressive Conservatives in Stormont-Dundas-South Glengarry following 27 years of Liberal dominance in the Cornwall area with a thumping majority.

Jim McDonell is a staunch advocate for Eastern Ontario in the face of significant service and government funding cuts.  Jim and his Ontario PC Colleagues have called out the Liberal Government on their failed energy policies that have resulted in North America’s highest electricity rates, which are driving businesses into bankruptcy and local residents into economic hardship.  Jim is currently the PC Critic for Government and Consumer Services.