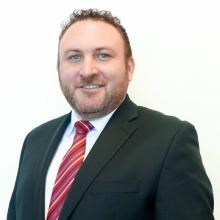 Peter is an Acadian. He was born in Halifax, Nova Scotia, and moved to New Brunswick at an early age. Perhaps because he grew up in a rural setting which lacked cable television, he spent his youth driving motocross, programming computers, and playing music. Following his passion, he attended Berklee College of Music in Boston. After, to cater to the music community, he opened two successful music stores which were eventually acquired by a larger chain. Since that time, Peter regained his interest in computers which took him around North America and abroad, including Texas, New York, Montreal, Ontario, and Southwest England.

Peter recalls that at a young age he asked his father about his political views, to which his dad replied, "Socially liberal; fiscally conservative." In rural New Brunswick, and on his grandparents' farm, government provided little and took plenty. As a young entrepreneur, he saw the irony in a self-satisfied, bloated bureaucracy being more of a hindrance to small business than a catalyst for success. After, while working in Texas, he was exposed to the Ron Paul Movement, and felt like someone was finally articulating how he had felt. A seed had sprouted. He was a libertarian.

Fast forward to 2015 when the Harper government proposed tyrannical Bill C-51, and (to add insult to injury) the Liberal opposition bound their vote to pass it. Within weeks Peter was a member of the Libertarian Party, and on the ballot. Since that time he has become the Director of IT of the federal party and was elected to their board, and more recently became a ready member of the Ontario Libertarian Party. He currently resides in Ottawa and is here to help you carve out a little more liberty and freedom wherever it can be found.