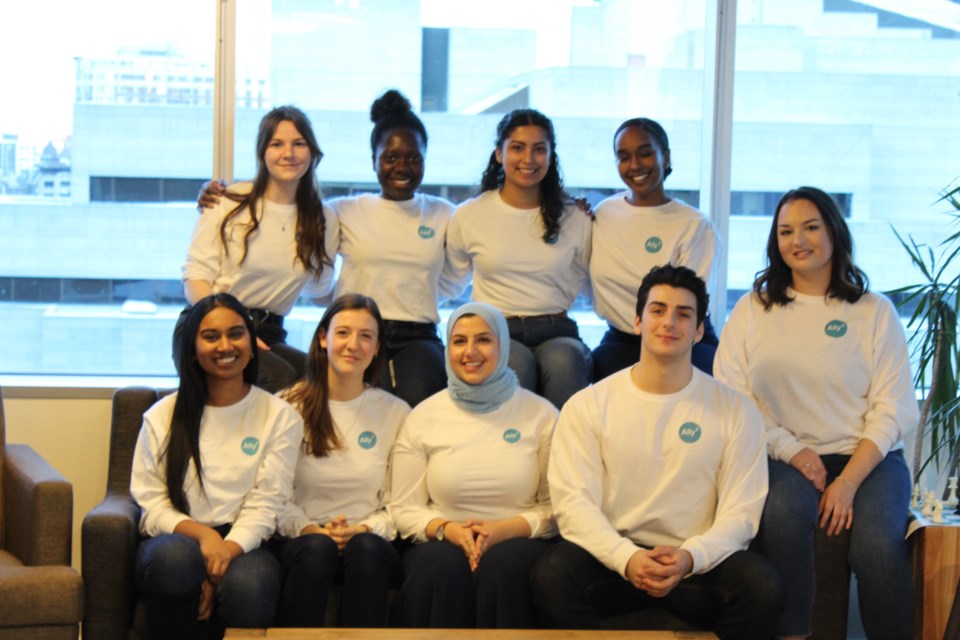 The youth-led nonprofit Ally Squared has quickly grown to 24 volunteers and they are currently exploring avenues for allyship between First Nation, Métis, Inuit, Immigrant, and Refugee communities, with their new project CommunALLY. Photo of volunteers courtesy Uswah Ahsan

Her name is Uswah Ahsan -- and if you aren’t sure of the pronunciation, simply ask her, because it’s worth learning.

Launching their newest project, CommunALLY, at the beginning of May, 24 volunteers are expanding their reach and exploring avenues for allyship between First Nation, Métis, Inuit, Immigrant, and Refugee communities.

“We both felt alienated from society but also felt that our cultures were alienated [from each other]," explains Ahsan. "It was interesting how we both, her as an Indigenous person and me as an immigrant, felt this way and both felt alone in these thoughts. But really a lot of communities and young people within those communities [feel the same way].”

In creating a project where those from Indigenous and immigrant communities can exchange their experiences of non-allyship, Ahsan is hoping that these groups can work together and support one another in intersectional ways.

With a current Canada-wide call for stories from these groups, Phase One of CommunALLY is underway and will unfold until the end of the summer, whereupon Indigenous and immigrant refugee leaders will coalesce to provide an open and honest conversation regarding these issues at a consultation meeting.

Afterwards, CommunALLY plans to compile learned material from the stories and consultation and making it an easily accessible learning tool as a booklet or online PDF, and taking further action pertaining to issues by lobbying the appropriate authorities.

Having immigrated to Canada from Pakistan, Ahsan says, “There are two main things that happen to most racialized immigrants I know.”

The first, a prevalent societal mishap, is the question of “where are you really from?”

She admits that, although often well-meaning, “It assumes that just because a person has colour on their skin means that they can’t be from here, even though the first peoples of Canada aren’t white.”

Ahsan’s name has also been a source of inequity.

“People try and avoid saying my name when they meet me or when they talk about me because they’re too scared to mispronounce it. But that just assumes that my name’s not important enough to learn. So I appreciate when people ask about the pronunciation of my name and at least try and learn [it].”

These small acts of assumption, termed microaggressions, lead to the systemic issues, according to Ahsan. Furthermore, small acts of discrimination can make a big societal impact on a macro level.

Experienced in the Ottawa world of nonprofits, Ahsan says, “The kind of advocacy that people ask for is always very centered on white liberal systems. And there’s an inherent problem there. Because the people in leadership, advocating for these things, don’t look like the people who are experiencing them. I think the social justice world in Canada is severely ignoring the voices of those people. And I think it’s time for marginalized communities to share their lived experiences in the mainstream.”

To submit a story, or for more information on CommunALLY, click here.

PAL Ottawa looking to give senior artists an affordable place to live
Jun 16, 2020 9:00 AM

Local muralist promoting positivity during COVID-19 through art in ByWard Market
May 19, 2020 12:30 PM
Comments
We welcome your feedback and encourage you to share your thoughts. We ask that you be respectful of others and their points of view, refrain from personal attacks and stay on topic. To learn about our commenting policies and how we moderate, please read our Community Guidelines.