Alberta's Chelsea Carey stole two points in an extra end for an 8-6 victory over Ontario's Rachel Homan in the final of the Scotties Tournament of Hearts on Sunday night. Homan had two chances to win the game but came short on both opportunities.
Feb 25, 2019 6:41 AM By: Canadian Press 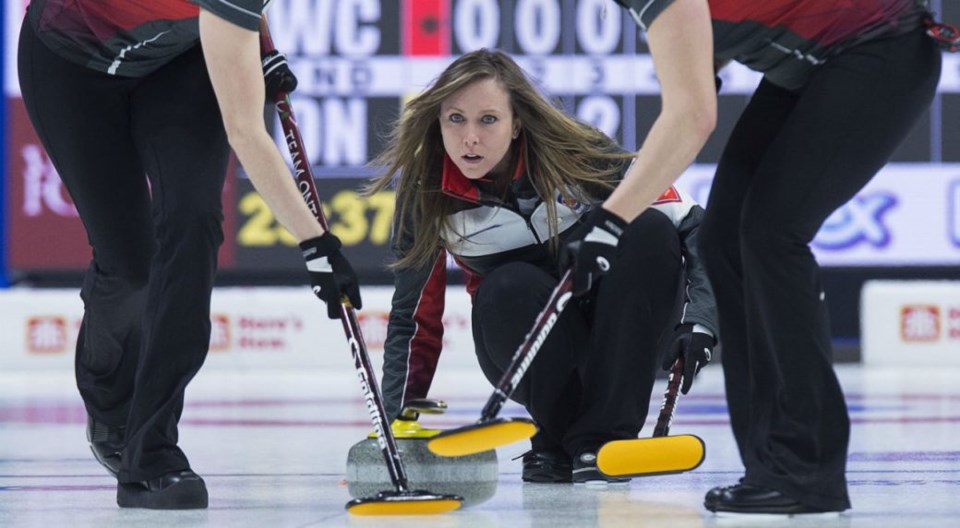 Rachel Homan in action during the 2019 Scotties Tournament of Hearts in Sydney, N.S. (Andrew Vaughan/CP)

Up one with hammer to win is normally the Rachel Homan wheelhouse position. Tied coming home with hammer is usually a lock too.

The Ontario skip picked the worst possible time to show a few cracks.

Alberta’s Chelsea Carey forced an extra end in the Scotties Tournament of Hearts final when Homan surprisingly came an inch short on her draw to the four-foot ring.

Carey then pulled out a wild 8-6 victory when Homan stunningly came up a foot short with a similar draw in the 11th.

"I don’t think I even know what just happened," Carey said. "I’m still in shock."

The steal of two left the crowd in disbelief. The dramatic finish gave Carey her second national women’s curling championship.

Brooms were sent flying when the win was sealed — with lead Rachel Brown nearly hitting the scoreboard with hers — before joining Carey and teammates Sarah Wilkes and Dana Ferguson to celebrate.

Homan and teammates Emma Miskew, Joanne Courtney and Lisa Weagle could only watch in silence. The world’s top-ranked team had plowed through the competition entering nationals and were favourites to win at Centre 200.

"We had control and we had every opportunity to win," said Homan.

The Ottawa skip was dominant in the first half of the game and looked like she would roll to a fourth career Scotties title.

"Who would have saw this coming? I’m still stunned," Ferguson said. "It doesn’t happen very often, if ever."

Homan had two early steals as Carey frequently missed wide over the first few ends. Carey gave up three points in the fourth after a flubbed takeout attempt.

Alberta started to make things interesting after the mid-game break by scoring on back-to-back steals. Carey had a chance to pull even in the ninth end but was well wide with her final throw.

She took her chances in the last two ends by hoping Homan would miss on her draws since the ice was becoming less consistent.

"Rachel hasn’t missed a draw to the four-foot all season," said Miskew. "It was just a really hard guess out there."

Just a day earlier, Ontario coach Marcel Rocque noted Homan’s strength when she had late control, pointing out she was 11-2 in one-point games this season with hammer and 5-0 in extra ends with hammer.

However, delivering precision throws when a national title is on the line can be a much different situation.

"She didn’t overthrow and gave it to the sweepers," Rocque said. "That’s the way you’re supposed to do it. So she wasn’t off by much. You play this game long enough and you know that that happens."

The final was a rematch of the 2017 Olympic Trials final. Homan won that game in Ottawa when Carey missed a double takeout that would have forced an extra end.

This game started off with only a fraction of the tension. By the end, it came close to matching it.

Carey wrecked on a guard in the first end, going wide on an angle raise in the second and feather-ticking a stone in the third end to settle for one.

Alberta finally caught a break in the sixth end when Homan missed a runback takeout for three that would have put the game away.

Ontario gave up another point in the seventh when Homan couldn’t deliver on a come-around tapback. She had a chance for a double takeout in the eighth but hit for one.

"You don’t think you’re going to win that game," Carey said. "They’re such good hitters that they usually run away with leads. It’s not easy to chip away at that."

Despite a nose hit opportunity in the ninth, Carey decided to draw for two but her throw was heavy and she took a single.

The Calgary skip, who was named most valuable player, won in 2016 with a different team.

Earlier in the day, Homan defeated Saskatchewan’s Robyn Silvernagle 9-7 in the semifinal. Homan broke open a tight game with four points in the sixth end and was in control from there.

Saskatchewan third Stefanie Lawton had a hog-line violation in the decisive end and Ontario took advantage.

Silvernagle, from Biggar, Sask., was making her debut at the national women’s curling championship.

"Of course you want to be in that final game but we can’t hang our heads low about not being there," Silvernagle said. "For the first Scotties for three of us, it was fantastic and we had a ton of great shots throughout the whole entire week.

"We just came up a little bit short today."

Carey earned direct entry into the final with a win over Silvernagle in the 1-2 Page Playoff game on Saturday. Homan reached the semifinal with a 3-4 Page Playoff victory over Northern Ontario’s Krista McCarville.

Homan has reached the playoffs in all six of her Scotties appearances. The three-time national champion had never won by taking the long route through the 3-4 game.

Competition started over a week ago with 16 teams entered in the main draw. Eight teams were cut after the preliminary round and four more were trimmed Friday night after the championship round.

Carey will represent Canada at the March 16-24 women’s world championship in Silkeborg, Denmark.

Both teams received sport and cresting funding for making the final. Carey’s team received $32,000 for the victory while Homan’s rink got $24,000.

The Canadian men’s curling championship — the Tim Hortons Brier — is set for March 1-10 in Brandon, Man.