By the numbers, Alfredsson’s candidacy might not be a slam-dunk or scream induction, but they speak in a clear, firm voice to his HHOF worthiness, at first blush and even more so with closer scrutiny.
Jun 24, 2020 5:28 AM By: Wayne Scanlan, Sportsnet 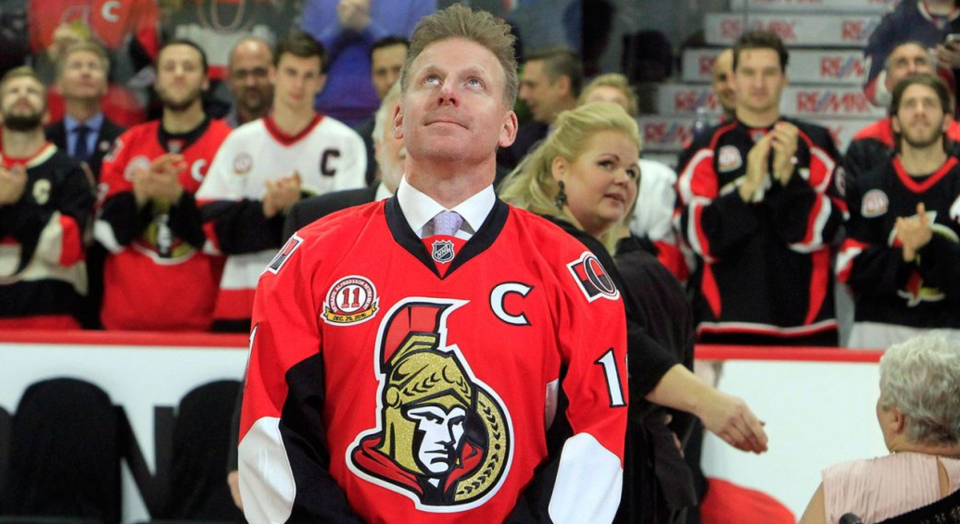 The esteemed Hockey Hall of Fame selection committee has a penchant for digging deep and finding inductees who escape detection on conventional radar.

Look no further than last year, when the committee unveiled Vaclav Nedomansky and Guy Carbonneau among their selections. Jimmy Shapiro would have given them long odds, if he’d considered them at all, as betting shots beforehand.

There is a Hall of Fame candidate who has been right in front of their noses since 2017, a tenacious player and proven leader with lasting legitimacy in the NHL arena as well as international play.

His name is Daniel Alfredsson. He is the most important player in the modern history of the Ottawa Senators, and he gets his fourth shot at hockey immortality on June 24 when selectors will again do their thing.

By the numbers, Alfredsson’s candidacy might not be a slam-dunk, or scream induction, but they speak in a clear, firm voice to his HHOF worthiness, at first blush and even more so with closer scrutiny.

His 1157 points in 1246 regular season games rank Alfredsson 54th on the all-time list, with Hall of Famers and future members, above and below him. With 444 goals, Alfredsson ranks 63rd all-time. In his first 1,001 NHL games, Alfredsson was virtually a point-per-game player, with 992 points. Injuries and age slowed him, but only as he approached age 40. In 2009-10, as he turned 38 and nudged past 1,000 games played, Alfredsson produced 71 points in 70 games for Ottawa, still a huge factor in the Eastern Conference.

Adjusted for the era in which he played (Hockey Reference uses a statistical measure to help compare goal scorers from Dead-Puck eras versus the Wild West
of the 1980s, etc.), Alfredsson’s numbers shine a little brighter.

Had he started his NHL career earlier than 1995 (hello, Mats Sundin), Alfredsson’s stat line might have looked like this, according to Hockey Reference: 1261 points (40th), 492 goals (47th).

More to the point, let’s compare Alfredsson to his peers. A look at the top scorers of the first decade of the millennium is illuminating.

If he was an album, the decade of 2000-09 would represent Alfie’s Greatest Hits.

In that stretch of years, encompassing 674 games in his case, Alfredsson ranks third among all NHL scorers with 723 points (1.073 pts/game), behind only Joe Thornton’s 823 points and Jarome Iginla with 724. Both of those players are expected to be in the Hall — Iginla as early as this year.

It was during that decade that Alfredsson became the first European captain to lead his team to the Stanley Cup final, a five-game loss to the Anaheim Ducks in 2007. Alfredsson was a beast that spring. His 14 goals in 20 games led all scorers and doubled the output of Dany Heatley, considered the sniper of the famed Alfredsson-Heatley-Jason Spezza trio. Coincidentally, each member of the line produced 22 points to tie for the NHL playoff scoring lead. It was Alfredsson’s goal in overtime against the Buffalo Sabres in the Eastern Conference final that launched the Senators into the Cup final for the first time in the modern history of the franchise.

We could play this game all day, finding Hall of Fame players, or candidates, with numbers comparable to Alfredsson. The overriding sentiment has to come from the gut. Is he a HHOFer? My gut says, “Yes.”

Alfredsson didn’t just lead his teams to the post-season, he blazed a path when they got there. In his 18 NHL seasons (including one year in Detroit, 2013-14), Alfredsson was in the playoffs 15 times. He was part of a spectacular run in Ottawa, 11-straight playoff appearances from 1997-2008. In 121 playoff games, Alfredsson scored 51 goals and 49 assists for 100 points.

Of those 51 goals, 11 were game-winners (21.5 per cent!), proving his clutch-iness. In the 2007 march to the final, Alfredsson scored four game-winning goals.

Had he won a Conn Smythe or Hart Trophy, Alfredsson would have already shown his wife Bibbi and their four boys his Hall of Fame plaque by now. Major awards impress selectors and Alfredsson’s career was better described as consistently excellent, rather than marked by one killer year. Alfredsson did win the Calder Trophy as rookie of the year in 1995-96, a stunning achievement for a player drafted 133rd in 1994. He also won the 2011-12 King Clancy Memorial Trophy for leadership on and off the ice and the 2012-13 Mark Messier Leadership Award. Alfredsson is an advocate for mental health issues in Ottawa and beyond. If character matters to the Hockey Hall of Fame (there are certainly some characters in there), then Alfredsson’s bid moves up a notch.

That Alfredsson was not part of a Stanley Cup winner saddens the storyline but does not stain the legacy. He wasn’t the one who let the Devils’ Jeff Friesen get away to steal Game 7 of the 2003 Eastern Conference final on Ottawa ice, when the Senators would have stood a great chance in the final against Anaheim. (The New Jersey Devils won the Cup). Nor was it Alfredsson’s fault that goaltender Dominik Hasek tore his adductor muscle (an anatomical reference that still resonates in the Nation’s Capital 14 years later) at the Turin Olympics and wasn’t available for the NHL playoffs. The 2005-06 roster was arguably Ottawa’s best.

His fans and the most casual of hockey observers pretty much recognize his NHL career story. But my sense is that Alfredsson’s contributions to the broader game are vastly underappreciated. Put your hand up if you knew that Alfredsson participated in five Olympic tournaments for Sweden and is second all-time in Swedish Olympic scoring with 16 goals and 28 points. At the 2006 Olympics, Alfredsson was the best Swedish forward by far, outscoring his Toronto Maple Leafs rival Mats Sundin (a Hall of Famer). Alfredsson produced five goals and five assists in eight games to lead the Tre Kronor to the gold medal. Alfredsson was also part of a silver-medal Swedish effort at Sochi in 2014. Over the course of his career, Alfredsson, a product of the Frolunda HC, took part in 14 international
tournaments for Sweden, including seven world championships (winning two silver medals, two bronze) and two world cups. In 88 international games, Alfredsson registered 74 points. Alfredsson was inducted into the International Ice Hockey Federation Hall of Fame in 2018.

Time for a Senator

After nearly 30 years, it is time to consider the moment when the modern Senators put their first player in the Hall of Fame. If not now, when? If not Alfie, then who? No other player who has suited up for Ottawa since 1992 has even close to Alfredsson’s stature in the organization. Alfredsson’s No. 11 was retired by the Senators on Dec. 29, 2016.

Beyond players, the late Bryan Murray deserves posthumous consideration as a Hockey Hall of Fame builder.

Murray coached the 2007 Senators team to the Cup final and went on to be a successful general manager in Ottawa as part of a lifetime in the game. Murray said of Alfredsson prior to the jersey retirement ceremony:

“I’ve been really fortunate to coach a lot of great players, a number of Hall of Famers over my career, and I can tell you there’s none better than Daniel Alfredsson: work ethic, character, the way he played the game. He played right and he led the right way for many of the younger players.”

It needs to be emphasized, Alfredsson was a complete player, not just an opportunistic forward. Though he didn’t win a Selke Trophy as the best defensive forward, he did finish fourth in the Selke voting in 2006, an indication of his all-around excellence.

“When the game was big and on the line, it was Alfie we wanted to have the puck,” former Senators defenceman Wade Redden said. “He was a part of all the biggest moments in franchise history.”

Daniel Alfredsson deserves to be part of Hockey Hall of Fame history.