Aline Chretien died surrounded by family Saturday morning at her home in Shawinigan, Que., a family spokesman said Sunday. She was 84. A cause of death was not specified.
Sep 13, 2020 1:52 PM By: Canadian Press 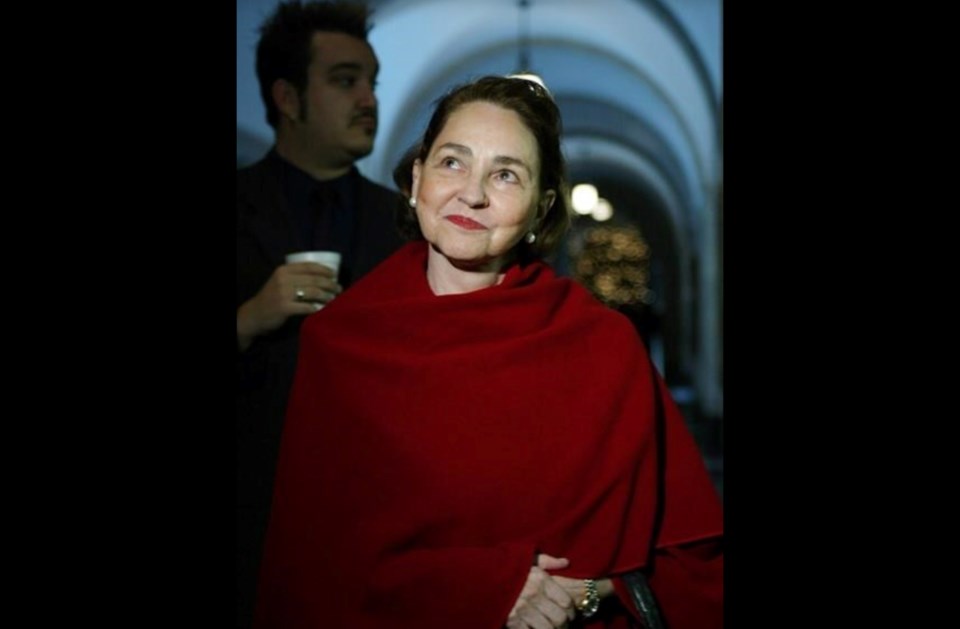 Aline Chretien may have been the most influential political figure Canadians never knew.

She was often seen at political events — a petite, elegant figure standing demurely at the side of her gregarious husband, former prime minister Jean Chretien — but was seldom heard. At least not publicly.

Behind the scenes though, she was Chretien's confidante and most trusted adviser, his "Rock of Gibraltar," as he always called her.

Aline Chretien died surrounded by family Saturday morning at her home in Shawinigan, Que., a family spokesman said Sunday. She was 84. A cause of death was not specified.

"Prime Minister Chretien, I think, would be the first to say that without her he never would have been prime minister," says long-time Chretien aide Eddie Goldenberg.

"She knew very well that she had not been elected herself so she didn't try to take the limelight. She felt that would be the wrong thing to do. She felt her role was to be supportive and ... to be very candid with advice and she could do that best in private."

Aline was instrumental in all Chretien's seminal political decisions: to stay in the federal arena despite appeals in the 1960s to run for a seat in Quebec's National Assembly; to quit politics in 1986 after losing the Liberal leadership to John Turner; to return to the fray in 1990; and to go for a third consecutive mandate in 2000.

She even arguably saved Chretien's life on Nov. 5, 1995, when a jackknife-wielding, mentally unstable intruder broke into the prime minister's official residence in the middle of the night. After encountering him in the hall outside their bedroom, Aline Chretien slammed and locked the door before calling the RCMP guardhouse and waking her husband, who then famously armed himself with a soapstone carving of a loon.

It was Aline who advised Chretien to recruit academic and future Liberal leader Stephane Dion to his cabinet after Canada's near-death experience in the 1995 referendum on Quebec independence.

And throughout his 40 years in federal politics, it was Aline who warned him when she thought he was too loud or too aggressive or embarking on what she considered the wrong course of action.

"Those of us who worked for prime minister Chretien knew sometimes, if there was a problem, that she was, (as) I called it, the last court of appeal," recalls Goldenberg.

"We could call her and say, 'I'd like it if you could talk to your husband about something because he's not listening to anybody else.' And he sure listened to her — always."

Aline Chaine and Chretien grew up in blue-collar families, just a few blocks apart in the Quebec pulp-and-paper town of Shawinigan. But their love affair began with a chance encounter on a bus when Aline Chaine was 16, two years younger than her eventual husband.

Chretien credits Aline with restraining some of his more boisterous youthful impulses and instilling him with self-discipline.

Aline had dreamed of studying languages at university but went instead to secretarial school at 16 so she could help support the Chaine family.

She adopted a similar support role once married to Chretien, staying home to raise daughter France and sons Hubert and Michel. During Jean Chretien's early years in federal politics, she stayed in Shawinigan, where she was his eyes and ears in the riding.

But she never stopped her education. She became quadralingual, learning as an adult to speak English, Italian and Spanish in addition to French. She became an accomplished pianist, studying with the Royal Conservatory of Music.

And she did eventually make it to university in 2010 — as the first chancellor of Laurentian University in Sudbury.

But despite travelling the world with her husband and rubbing shoulders with some of the planet's most powerful leaders, Aline always maintained close contact with family and lifelong friends in Shawinigan. The couple kept a home at nearby Lac des Piles, where Aline spent her final days.

In a rare interview with Maclean's magazine in 1994, Aline described herself as "Madame Tout le Monde" — Mrs. Everybody.

She recounted calling her husband in a fury in 1973 when the federal Liberal government of the day was debating a cut in family allowances.

“I said ‘Jean, if you touch that, you’ll be in trouble. This is the only money some women in Shawinigan have got for themselves.’ You can have, as I did, a Madame Tout le Monde point of view when you are at home, listening to the radio with your kids.”

Peter Donolo, who was communications director for Chretien when he was Opposition leader and during his first term as prime minister, says Aline had refined taste in art and music but was totally unpretentious and never forgot her roots and, thus, kept her husband "grounded."

"She was never impressed by wealth or power," Donolo says. " She could see through phonies in like a nanosecond."

The first time he met Aline, Donolo says, she asked him about his young family and then advised him: "Remember, it's very important that you not ignore your family while you're working in politics because, after everything is done, all you have left is your family."

She was, Donolo says, the love and "mainstay" of Chretien's life for almost 70 years.

"I can't think of a stronger bond between husband and wife that's lasted this long and is as intimate and close."

Aline and Jean Chretien marked their 63rd wedding anniversary on Sept. 10, just days before she died.

Family spokesman Bruce Hartley said only a private ceremony is being planned for now because of restrictions associated with COVID-19, with a public memorial planned for sometime in the future.