Investigators are speaking to witnesses, gathering video and even flying a drone at Westboro Station, following the tragic collision.
0
Jan 12, 2019 8:58 AM By: Mike Vlasveld 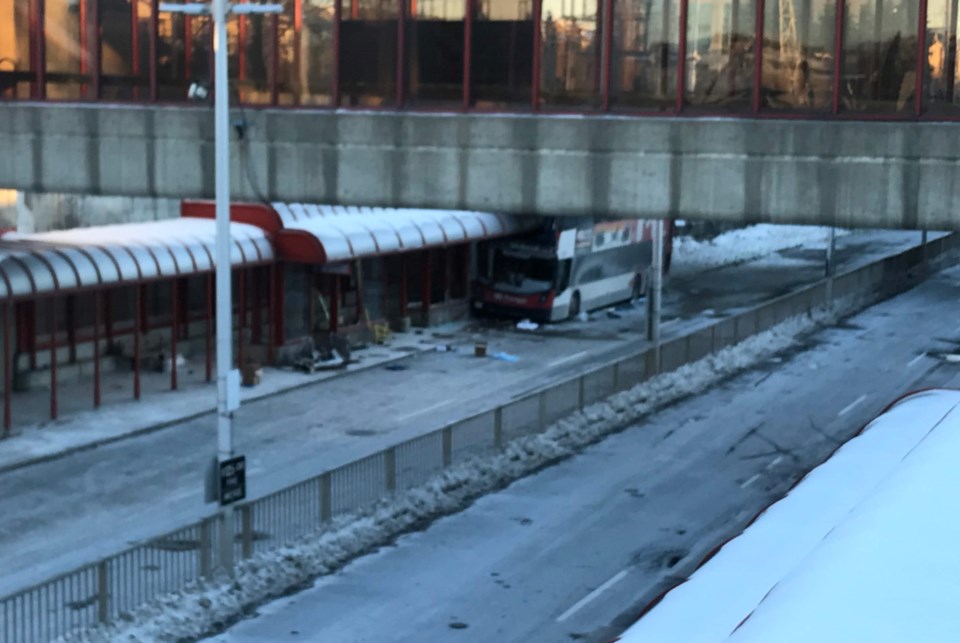 The driver of an OC Transpo double-decker bus, which slammed into Westboro Station on Ottawa's Transitway, has been released from police custody unconditionally pending further investigation.

The collision left three people dead and another 23 injured, Friday.

Ottawa Police Service investigators worked through the night Friday into Saturday, to positively identify all three victims and contact their families and loved ones. No information on the identity of the three will be released at this time.

Chief Charles Bordeleau said officers are still speaking with witnesses, people who were on the bus, and gathering video evidence from Westboro Station.

"My understanding is, the video [from the transit station] does capture several angles, and will be beneficial to investigators," he explained.

Listen to Bordeleau talk about the investigation on a special edition of 1310 NEWS' Ottawa Today with Mark Sutcliffe:

Investigators will be flying a drone at the scene on Saturday to take measurements and try to determine any environmental factors which may have played a role in the collision.

All OC Transpo buses also have data and video recorders in them.

"Our investigators will be taking [steps] in order to retrieve that, and then do an analysis that will help us determine the speed and all of those factors -- the technical issues around the bus," said Bordeleau.

Road closures remain in place near the scene of the collision and Ottawa police ask the public to avoid the area.

Anyone who may have left the scene without speaking to police or has information about this collision is asked to call the OPS at 613-236-1222 ext 2481.

Anonymous tips can be submitted by calling Crime Stoppers toll-free at 1-800-222-8477 (TIPS), or by downloading the Ottawa Police app.

Prime Minister and other leaders offering condolences in wake of Westboro tragedy
Jan 11, 2019 8:30 PM
Comments
We welcome your feedback and encourage you to share your thoughts. We ask that you be respectful of others and their points of view, refrain from personal attacks and stay on topic. To learn about our commenting policies and how we moderate, please read our Community Guidelines.