Chris Phillips has his No. 4 raised to rafters by Ottawa Senators 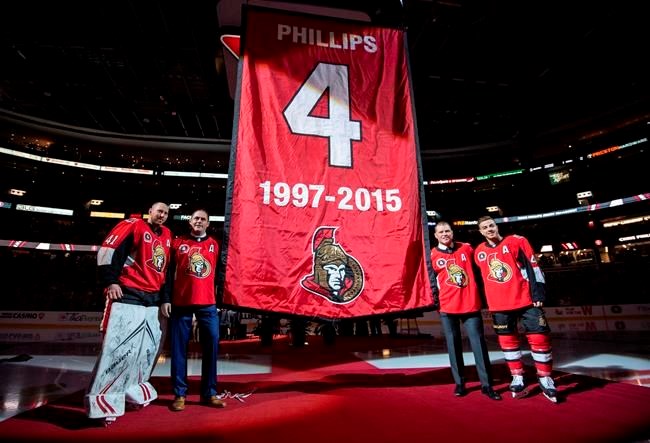 Retired defenceman Chris Phillips was honoured by the Senators on Tuesday night by having his No. 4 raised to the arena rafters ahead of Ottawa's game against the Buffalo Sabres.

Phillips, who spent his 17-year career with Ottawa, is just the third Senators player to ever have his sweater number retired by the team alongside Frank Finnigan's No. 8 and Alfredsson's No. 11.

“Incredible,” said Phillips of seeing the banner go up.

“It was kind of a finality with my hockey career and maybe that’s the most emotional part of it. It’s done now for sure. To be honoured alongside (Alfredsson), long history of playing together, being great friends. When I look at, I don’t know what the number is but how many guys in the league even have their number retired. To be in that small company I’m really at a loss for words. It’s a really special feeling.”

Selected first overall in the 1996 NHL Entry Draft, Phillips had 71 goals and 217 assists for 288 points over his career. An ailing back forced him into retirement in 2016.

Curtis Lazar was the lone Sabres player sitting on the visitors bench to watch the presentation. Lazar was drafted by the Senators in 2013 and lived with Phillips and his family while playing in Ottawa.

“For whatever reason I had just assumed the whole team was going to be there and hadn’t looked until I turned back and got a pretty good chuckle out of that,” said Phillips. “To see him there and as I said that’s the type of kid that he is. Strong character."

Phillips' rugged style led to a number of back ailments late in his career. He was restricted to just 36 games in the 2014-15 season.

His last game, on Feb. 5, 2015, broke Alfredsson's franchise record for games played and would be the last time Phillips suited up for the Senators. He hoped to return after undergoing back surgery, but suffered a cracked vertebrae during his rehabilitation and missed the 2015-16 season.

Phillips, who won world junior gold in 1996 and '97, also represented Canada at the world hockey championship on three occasions, winning silver in 2005 and '09.

He was named an alternate captain for the Senators in October 2006 and kept the title for the rest of his career.

This report by The Canadian Press was first published Feb. 18, 2020.