A second clinic was held Thursday for Hillary McKibbin, 6, who is in search of a bone marrow donor
Jul 4, 2019 7:46 PM By: Andrew Pinsent 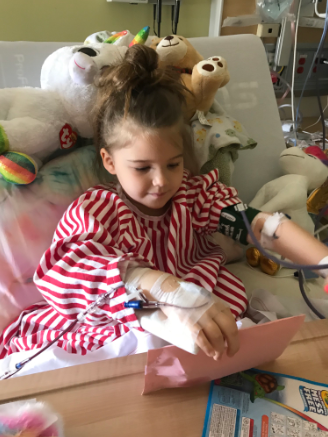 Photo of Hillary McKibbin, 6, in hospital.

For the second time in two weeks, Ottawa residents showed up in droves to give the family of a six-year-old girl in search of a match for a bone marrow transplant a better chance to find a donor.

Hillary McKibbin, who turned six last week, was recently diagnosed with the rare blood disorder aplastic anemia and needs to find a donor with a 100 per cent match, a feat that's been unsuccessful so far.

Her parents Kelly and Steve McKibbin have lead the charge to find a donor and with the help of Canadian Blood Services, organized a second clinic Thursday for the public to donate stem cells to the national registry that could be a match for Hillary.

Thursday’s clinic was held at St. Francis Xavier High School in Riverside South, the same spot a similar event the week before drew roughly 700 donations before it ran out of testing kits.

Canadian Blood Services doubled their volunteer staff and had 1,400 kits on hand in preparation for the event, which managed to sign up 251 more people for the national registry.

“It just takes one person for us to make that difference and we appreciate every single person who comes through the door and it reinforces that people are understanding the issue.” Kelly McKibbin said at Thursday’s event, as her and her husband greeted each visitor.

“I think this is something we’ll be doing the rest of our lives just because of the connections we’ve made with survivors and families with this rare condition,” McKibbin said.

"We’ve met a lot of families who’ve lost their children because they haven’t found a match and it's just not acceptable because of how easy it is to join the registry. We really think people just need to be aware of the issue.”

The hope is to hold a similar event in the east end of Ottawa some time in the near future.

Hillary is still happy and singing as usual, according to Kelly, but also tired and being held in isolation, with doctors deducing she must be feeling pretty rough.

She is awaiting a blood transfusion that will give her enough strength for a visit to Montreal next week, where doctors will be examining her treatment options.

“It’s not necessarily a second opinion but another opinion,” McKibbin said, noting the “world class” medical staff at CHEO has also recommended the visit.

She said the family is waiting to hear whether Hillary will need a transplant and how quickly, as well as if there would be a match there waiting for her.

Aplastic anemia affects only roughly one in a million people every year including Dianne McMahon from Ottawa, who also showed up Thursday after seeing Hillary’s story shared on social media.

“I said ‘that sounds like what I have!’” McMahon said, adding she reached out to Kelly and her family to offer her support in their current situation.

While not a candidate for a transplant herself after diagnosis in 2018, McMahon said her avenue is different from Hillary’s and she’s been able to treat her disorder with medication and under the close supervision of doctors.

Coincidentally, on top of a one in a million disorder, Hillary and Dianne also share the same birthday.

McMahon said it was “fantastic” to see the support from the broader community and also suggested giving blood for those looking to aid the situation.

“I’m also really thankful for people who give blood, because for Hillary and myself, what’s keeping us alive for a bit is blood transfusions,” she said.

Kelly McKibbon expressed her and her family's "heartfelt gratitude for the city" in wake of the response to Hillary's situation.

Those interested in donating to the national registry can find order kit in the mail online at Canadian Blood Services website or more information can be found at startwithhillary.ca.