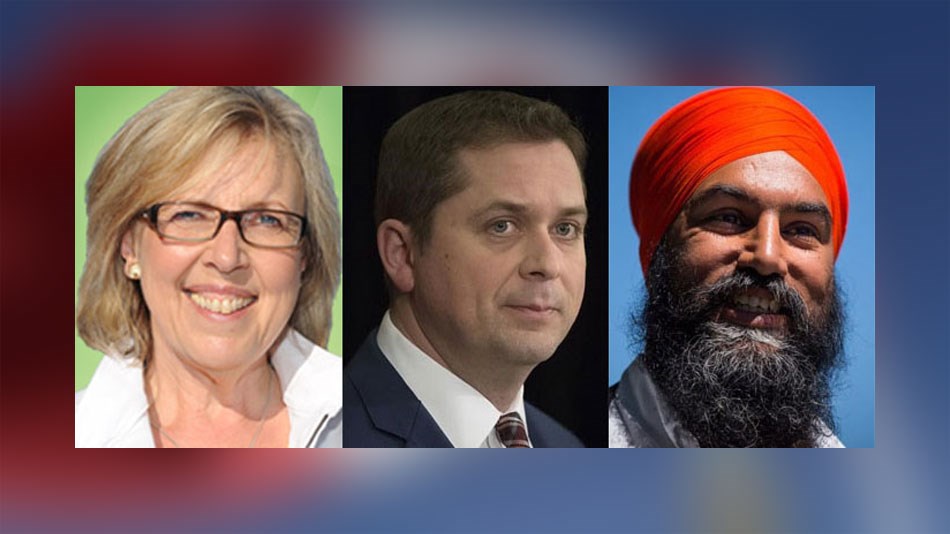 Elizabeth May, Andrew Scheer and Jagmeet Singh. Photo credits: Twitter (May) and The Canadian Press (Scheer and Singh)

Citytv and Maclean's are hosting the first National Leaders Debate of the 2019 election calendar on Thursday, September 12 starting at 8 p.m. EDT (5 p.m. PDT).

The two-hour debate in English will centre on four major themes: the economy, foreign policy, Indigenous issues and energy and the environment.

After the main segment of exchanges, each leader will have 90 seconds for a closing statement.

The event will take place in Toronto while airing live on Citytv, Macleans.ca and Facebook, as well as on 1310 NEWS and being live-streamed on 1310NEWS.com and CityNews.ca.

CPAC will carry the debate with a French translation, while OMNI Television will air it with interpretation into Mandarin and Cantonese (in broadcast) and Punjabi (online).

"We are continuing our tradition of early debates after the 2015 federal leaders' debate ignited a cross-country conversation and set the agenda for election day," says Maclean's editor-in-chief Alison Uncles. "We are looking forward to a civil, spirited discussion of ideas, moderated by the extraordinary Paul Wells."

The leaders of the Conservative Party, the Green Party and the NDP have confirmed their attendance. The Liberals have not yet confirmed Justin Trudeau's participation but an invitation remains open.

"I have interviewed all four of the party leaders we've invited, one-on-one, for the Maclean's In Conversation series in the last year and a half," says Wells. "I'm looking forward to welcoming them again at our debate. If three show up, that’s enough. If four do, so much the better."

Citytv and Maclean's will have post-debate coverage, including analysis and viewer reaction.