College's drum project to reinforce 'commitment to truth and reconciliation'

Faculty and students at Algonquin College are coming together, under the guidance of Indigenous Elders, to build ceremonial drums for each of its three campuses.
0
Mar 19, 2018 2:06 PM By: Mike Vlasveld 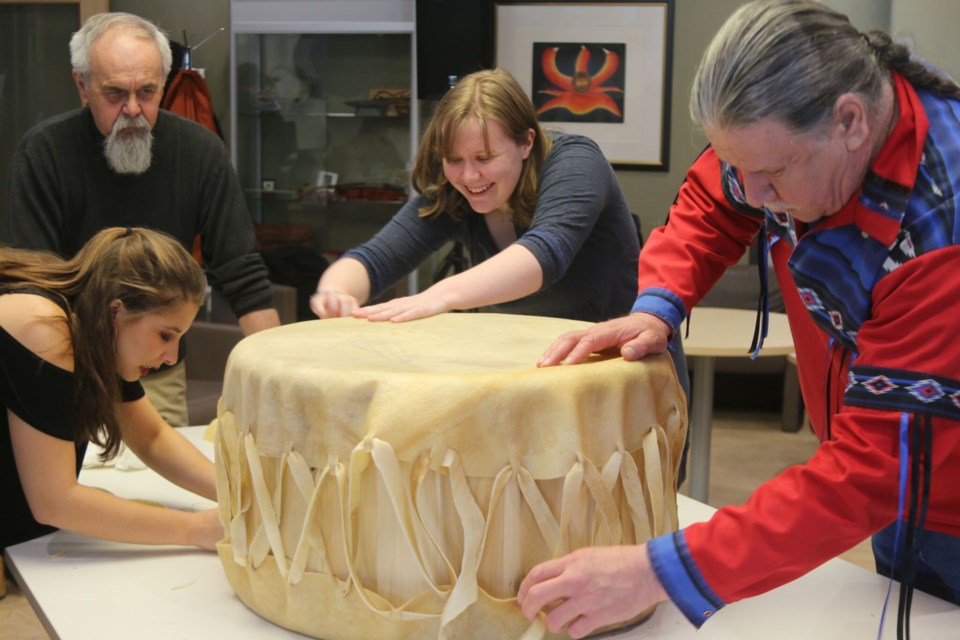 Algonquin College wants Indigenous traditions to play a bigger role in the culture at each of its campuses.

It launched a new project called 3 Drums, 3 Campuses, on Monday.

Students, faculty and members of the public visited the Mamidosewin Centre in the Student Commons at the Ottawa campus to witness the building of a large ceremonial drum, using traditional materials and craftsmanship.

They worked under the guidance of Indigenous Elders, using traditional materials and craftsmanship to make the drum.

"For many Indigenous people, the drum is the heartbeat of Mother Earth -- that's what one of our Elders shared with me," said Andre O'Bonsawin, Manager of Indigenous Initiatives for the College. "What we're trying to do with this project is embed Indigenous knowledge and cultural teachings in the College."

The project involves three drums being made for each of the College's campuses, in Perth, Pembroke and Ottawa. It is intended to reinforce the institution's commitment to Truth and Reconciliation between Canada's Indigenous people with the wider Canadian society.

O'Bonsawin said the hope is for the drums to eventually be used during important Algonquin College ceremonies, including annual convocation events.

Enjoying the beautiful sound of the hand drum and the voices of our #Indigenous learners and Counsellor Jackie as we close the day!

Prison watchdog decries 'Indigenization' of Canada's correctional system
Jan 21, 2020 4:13 PM
Comments
We welcome your feedback and encourage you to share your thoughts on this story. We ask that you be respectful of others and their points of view, refrain from personal attacks and stay on topic. To learn about our commenting policies and how we moderate, please read our Community Guidelines.