He wrote on Twitter, it's time for Ottawa's elected officials to "demand that it be redesigned to add harmony to our beautiful city."
0
Jul 11, 2019 2:02 PM By: Mike Vlasveld 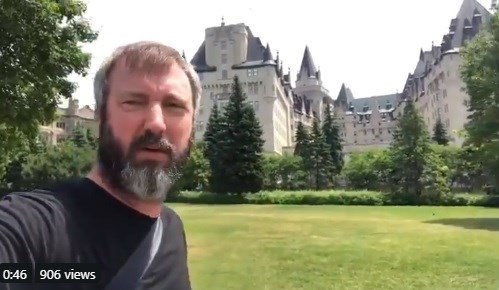 One of Ottawa's most internationally recognizable comedians is back in the city to voice his displeasure with a proposed design for an addition to the Château Laurier.

In a video posted to Twitter on Thursday, Tom Green said he spent much of his youth in downtown Ottawa, especially skateboarding at Major's Hill Park.

He wrote on Twitter, Thursday, "It is time for our elected officials to stand with the people and reject this architectural abomination and demand that it be redesigned to add harmony to our beautiful city."

Message to Ottawa City Council As Harry Truman said, “Men (people) make history and not the other way around. In periods where there is no leadership, society stands still. Progress occurs when courageous, skillful leaders seize the opportunity to change things for the better.”

Green was planning on being at Ottawa City Hall for a special meeting regarding the Château Laurier project at 2 p.m., Thursday.

Expansion design could effect canal world heritage designation: Friends of Chateau Laurier
Jul 9, 2019 1:50 PM
Comments
We welcome your feedback and encourage you to share your thoughts. We ask that you be respectful of others and their points of view, refrain from personal attacks and stay on topic. To learn about our commenting policies and how we moderate, please read our Community Guidelines.