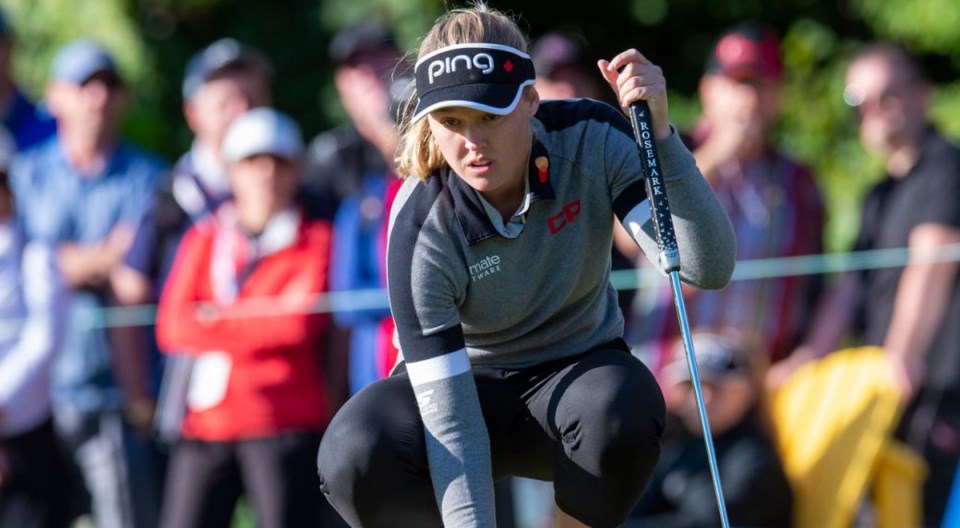 Brooke Henderson of Smith's Falls, Ont. lines up her putt on the second hole during the first round of the CP Women's Open. Frank Gunn/ The Canadian Press

Ottawans will again ahve the chance to see live LPGA action in 2022, as Golf Canada and Canadian Pacific (CP) announce the CP Women’s Open is coming back to the Ottawa Hunt and Golf Club.

It will mark the championship’s fifth visit to the nation’s capital and fourth visit to Ottawa Hunt and Golf Club (previously hosted in 1994, 2008 and 2017).

"The CP Women’s Open always receives terrific community support, but when we’re in Ottawa that backing is intensified,"  says Golf Canada CEO Laurence Applebaum. "With our 2017 event in Ottawa for Canada’s 150 celebration and the excitement around Brooke [Henderson] competing so close to home, we set records for attendance, volunteer enrollment and left a meaningful charitable contribution. I’m certain the community will embrace all facets of the event when the stars of the LPGA Tour return to Ottawa."

Through its CP Has Heart campaign, CP will once again be making a significant charitable donation to the host community. In the first six years of CP’s title sponsorship of the event, more than $10.7-million has been raised in support of children’s heart health across Canada.

"Together, with all involved with the event, including our CP Golf Ambassadors Brooke Henderson and Lorie Kane, we look forward to raising money for a worthy cause and leaving a lasting charitable legacy in Ottawa through CP Has Heart," says CP President and CEO Keith Creel.

The announcement of Ottawa as the 2022 host city is the core of a partnership between the City of Ottawa, Ottawa Tourism and Golf Canada.

"The tournament was a major success in 2017, attracting a record number of fans and putting Ottawa on the map as a fantastic golf destination," adds City of Ottawa Mayor Jim Watson. "We look forward to, once again, welcoming the best talent from across the world for this exciting event in 2022."

More than 50,000 people attended the event in 2017, where Sung Hyun Park earned a two-shot victory at Ottawa Hunt as part of an amazing season that saw her capture several LPGA Tour awards, including Louise Suggs Rolex Rookie of the Year, Rolex Player of the Year and the Season Money Title.

Information regarding tickets, volunteer opportunities and corporate hospitality for the 2021 and 2022 CP Women’s Opens will be available online at a later date.

Lester B. Pearson high school latest to declare COVID-19 outbreak
Sep 28, 2020 12:54 PM
Comments
We welcome your feedback and encourage you to share your thoughts. We ask that you be respectful of others and their points of view, refrain from personal attacks and stay on topic. To learn about our commenting policies and how we moderate, please read our Community Guidelines.