Crawford wants to stick with Senators, but will let process play out 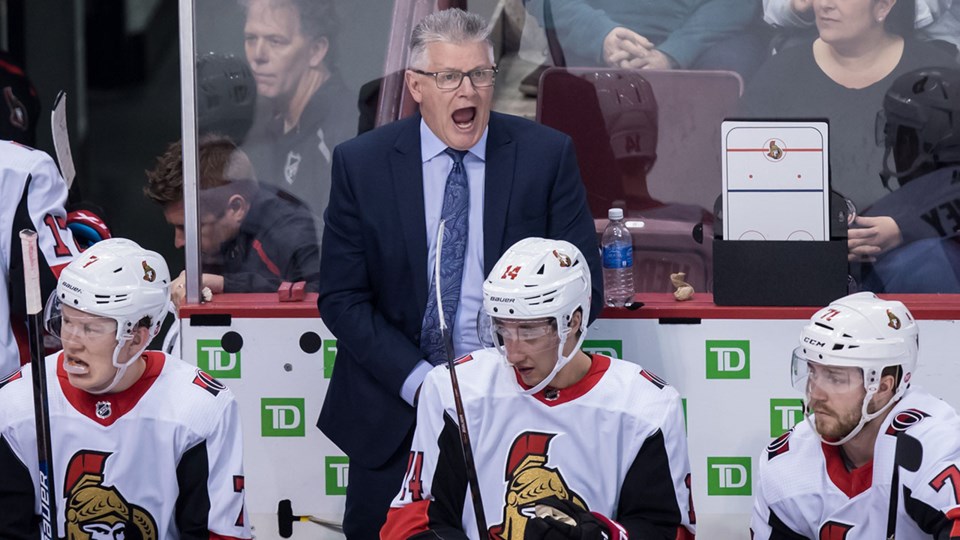 If this was Marc Crawford's final media conference as the Ottawa Senators' head coach, he went out with a bang.

On the day his players cleaned out their stalls, Crawford was articulate, humble and under no illusion that he might have the inside track for a longer stint as head coach after the Senators played modestly better in the final 18 games of the season. Crawford moved up from his associate coach position after Guy Boucher was fired March 1.

Crawford is a candidate to be the head coach next season, but so will many others, and the selection process could take a while because the Senators are first expected to hire a president of hockey operations. That new executive could have input on the future direction of the staff.

"Every job in hockey is a great job - and I should know, I've held most of them," Crawford said, to laughter. "At the same time, I've recognized the best job in the world of hockey is being a player. The second best job is being a head coach, that really came through to me in those last 18 games."

The question for the Senators organization will be to determine if Crawford represented enough of a change in direction from his good friend Boucher, who brought him here from Switzerland where they both were three seasons ago.

Until he was named interim head coach, Crawford was in charge of Ottawa's young defensive corps, which allowed a league-worst 302 goals-against.

"I'd say it's definitely a priority," Boucher said. "You can't be a playoff team without getting that number down significantly. There's a lot of room for improvement. And I think there will be a natural improvement in competitiveness from our talented youth."

Boucher cited the leadership of veterans like Zack Smith and Mark Borowiecki, along with the inspired play of youngsters Brady Tkachuk, Colin White and Thomas Chabot.

Crawford, who led the 1995-96 Colorado Avalanche to a Stanley Cup championship, compared this Senators rebuilding project to a young Los Angeles Kings team he coached from 2006-08. That team had an emerging Dustin Brown, Jonathan Quick, Anze Kopitar and eventually a defenceman named Drew Doughty, drafted just after Crawford's last season behind the bench there. The Kings went on to win Cups in 2012 and 2014.

"I said one of the years at a post-season conference that that team was destined for greatness," Crawford says. "I think the same of this (Ottawa) group. I really believe this group has pieces much like that group had."

One of those pieces, Erik Brannstrom, 19, is in Belleville but will soon join a Senators defence that will have offensive upside with Chabot, Brannstrom and Christian Wolanin.

Crawford admitted he would love to stick around and help these players develop, but understands the coaching selection must play out. General manager Pierre Dorion is expected to meet with all his coaching staff later this week.

"Yes, I would love to stay here, but I also accept this is a process and the process has to continue," Crawford said. "I'm willing to let the chips fall where they may.

Where his comfort level ends, Crawford said, is campaigning on his own behalf in public. He will leave it to the powers that be to make the call.

Since Crawford first joined the NHL as head coach of the Quebec Nordiques in 1994-95, he has seen hockey evolve from a rough-and-tumble game of clutching and grabbing to today's speed game, more inclusive to smaller players.

The key now, he says, is bringing speed and competitiveness, "the winning combination." The Senators have a lot of potential in both areas, Crawford believes.
Coaches evolve, too. Better known as a yeller and screamer in his early years, Crawford has become more of a teacher, picking his spots for intensive rants (more generally targeted at officials).

"If you look at the history of the game, the people that last are the people that recognize you've got to change with the time," Crawford said. "The one beauty of being in the game - the players are younger and (ever) more younger than you.

"And that helps make you young. You've got to keep finding ways to relate to young people, get the message across."

The best NHL coaches have done just that, he says.

"The coaching fraternity in the NHL is a small fraternity, but the ones that last are the guys that continually evolve."

Several Senators will be candidates to go to the World Hockey Championships in Slovakia. Tkachuk, White and Chabot are at the top of the list. Tkachuk and White have heard from Team USA and both are likely to play, although they haven't made a final decision yet. Chabot says he will have a final MRI on his foot to make sure he is healthy enough to represent Canada.

All three are part of a brighter future for the Senators. Tkachuk, 19, scored 22 goals as a rookie and was "arguably our best player" by season's end, Crawford said.

"I definitely want to get a little bit stronger, quicker, work on my conditioning," Tkachuk said. "So I won't break down as easily in the physical game.

"I'm going to take a break from the ice. Rest and recover. Then get back into it in a couple of weeks."

Defenceman Borowiecki feels for fans who lost faith in the Senators this season, on and off ice, which was reflected in poor attendance at Canadian Tire Centre.
"It sucks. That's a bad situation," Borowiecki says. "As a guy who grew up here - and I do love this city with all my heart - it hurts to see that for sure. It's tough. We need to extend that olive branch. The onus is on us as players to get back into this community, show our support for this community and make that first step in repairing that relationship.

"That extends to the whole organization. There were a lot of errors where we need to improve and be better. That includes everyone."

Another homegrown defenceman, Cody Ceci, would love to avoid a second round of arbitration by signing a new contract this summer.

"No one wants to go to arbitration even once," said Ceci, who was awarded a one-year deal in August for $4.3 million. "So going back this year it would be tough to do."

Ceci, who had been seeking $6 million, said he found the experience frustrating and believes that he and Dorion are now "on the same page" as far as agreeing to a new deal.

"It would be nice to get something done with a little bit of term," Ceci said. "I think it would help my game, just having that there. It would help me settle in and help the younger guys coming up."

At 25, Ceci has become a veteran of the D-corps with six seasons in Ottawa.

Ceci has often been a target on social media for unhappy fans and says he played better after getting off the grid this season.