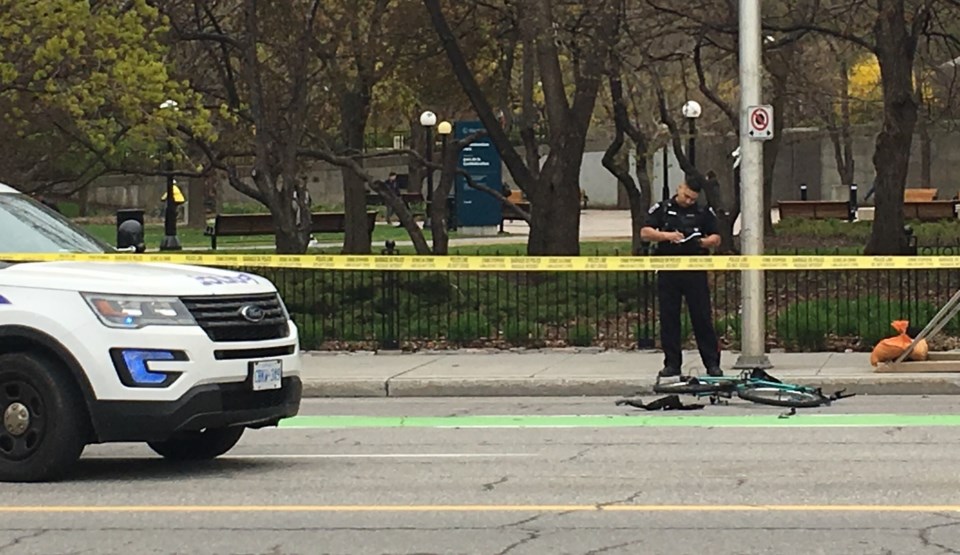 A police officer investigates after a cyclist was hit on Laurier Avenue, near Elgin, on Thursday, May 16, 2019. Cormac MacSweeney/1310 NEWS

A cyclist has passed away after suffering a critical head injury after being struck by a vehicle, downtown, and a manhunt is underway for the driver.

The collision happened around 7:20 a.m., Thursday, at Elgin and Laurier.

The man on the bicycle was taken to hospital in critical condition.

Ottawa police tell 1310 NEWS, the vehicle did not stop after the collision, but the vehicle was found abandoned a short distance away. Police are now searching for the driver, who is believed to have run from the scene.

Several roads around the crash were closed for the investigation. Police are looking to speak with anyone who witnessed the collision, or has video, cell phone images or dash cam video of the collision.

While it's not yet known what happened in this specific case, cycling advocates say Ottawa's infrastructure leaves too many of them vulnerable to motor vehicles.

"There's a lot of things that are going on in that stretch of Laurier," said Trevor Haché, Healthy Transportation Coalition. "There's three lanes that are westbound for motor vehicles, driven by people who are often criss-crossing across the bike lane in a very short stretch of road, as drivers try to merge from the Queen Elizabeth Drive ramp."

"I'm told by numerous cyclists who cycle that stretch of Laurier often that it is a white-knuckled ride."

This is the second cyclist struck by a vehicle in Ottawa, this month. A woman was hit by a truck while riding her bicycle near the Civic hospital, earlier this month.

Cyclist struck by truck near Ottawa Hospital Civic Campus
May 7, 2019 9:16 AM

Ottawa police looking for witnesses in fatal cyclist hit and run downtown
May 16, 2019 11:04 AM
Comments
We welcome your feedback and encourage you to share your thoughts. We ask that you be respectful of others and their points of view, refrain from personal attacks and stay on topic. To learn about our commenting policies and how we moderate, please read our Community Guidelines.