Everyone who was arrested has since been released and the demonstration has come to an end.
Nov 21, 2020 2:45 PM By: Alex Black 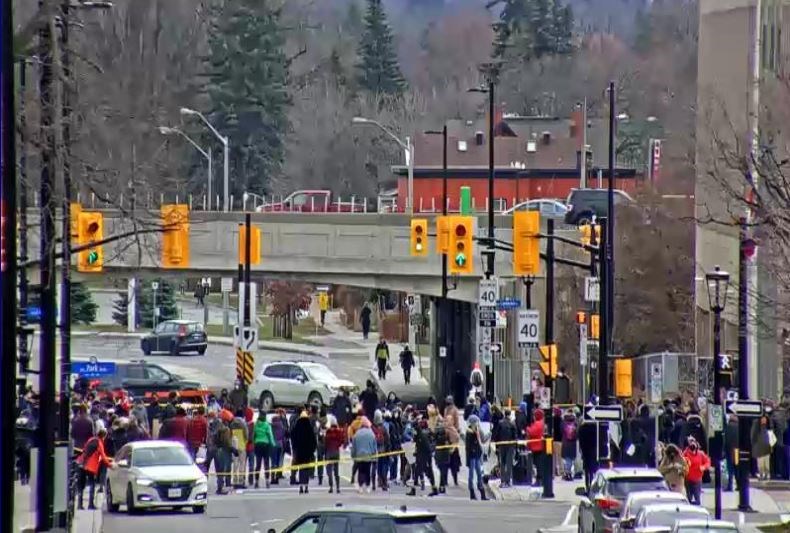 Demonstrators outside the Ottawa Police Service headquarters at 474 Elgin Street on November 21, 2020 / MTO

A demonstration in front of the Ottawa Police Service (OPS) headquarters has come to end, following the release of 12 protesters.

The demonstration to end racial injustice was organized and attended by members the Ottawa Black Diaspora Coalition and the Justice for Abdirahmen group. It commenced Thursday afternoon at the intersection of Nicholas Street and Laurier Avenue, but was removed by OPS in the early morning hours Saturday.

Police charged 12 people with mischief while taking down the demonstration, and issued one warning under the Youth Criminal Justice Act.

The protesters then moved the demonstration to the police station at 474 Elgin Street to call for the release of those arrested, which closed a portion of Elgin Street for four hours and also temporarily closed front desk services.

Everyone who was arrested has since been released and the demonstration has come to an end.

Elgin Street has reopened, as well as the front desk at police headquarters.

The Justice for Abdirahmen group has since tweeted a thank you to everyone who supported the demonstrations, and is asking people to follow them and the Ottawa Black Diaspora Coalition on social media for updates on their next actions.

Thank you to everyone who came to the Chiinawendiwen - We Are Related action during the past 2 days. All arrested protestors have been released.

'We are ready to talk:' Ottawa Police Services Board responds to downtown demonstration against racial injustice
Nov 21, 2020 1:26 PM

Black Diaspora Coalition demonstration moved to Ottawa Police Service headquarters; portion of Elgin Street closed
Nov 21, 2020 11:36 AM
Comments
We welcome your feedback and encourage you to share your thoughts. We ask that you be respectful of others and their points of view, refrain from personal attacks and stay on topic. To learn about our commenting policies and how we moderate, please read our Community Guidelines.