Doug Ford is set to officially become the premier of Ontario today, weeks after leading his Progressive Conservatives to a sweeping victory in the provincial election
Jun 29, 2018 6:26 AM By: Canadian Press 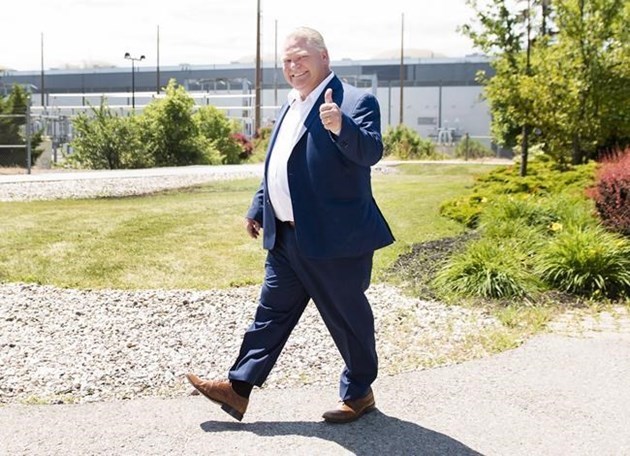 Doug Ford is set to officially become the premier of Ontario today, weeks after leading his Progressive Conservatives to a sweeping victory in the provincial election.

Ford is scheduled to be sworn in this morning alongside his cabinet, which he has suggested will be smaller than it was under the outgoing Liberals.

The Progressive Conservative leader will then hold a second, public ceremony on the steps of the legislature, during which he is expected to reaffirm his oath of office and give a speech.

The Tories won a majority in this month's election, which also saw the outgoing Liberals reduced to seven seats and the NDP propelled to official Opposition status.

Ford, a former Toronto city councillor who took the reins of the party earlier this year, campaigned largely on a promise of fiscal responsibility, though he did not present a fully costed platform.

He has not yet said when he will recall the legislature but maintains he wants to start working on his plan for the province quickly and has already set the wheels in motion on several of his proposals.

He has vowed that his first move once the legislature resumes will be to scrap the cap-and-trade system — an announcement that led to the cancellation of several green energy initiatives funded through the program.

Ford has also placed the public service under a hiring freeze, with the exception of essential frontline staff, and ordered that all discretionary spending such as meals for staff meetings be put on hold.

The Tories have also reached out to the group representing Ontario doctors to reopen contract negotiations rather than proceed to scheduled arbitration, saying they want to repair a relationship that soured under the previous regime.

During the election campaign, Ford promised to launch a line-by-line audit of government spending in order to eliminate waste, and said he will find billions in efficiencies each year without cutting jobs.