Leaders of the NDP, Conservative and Liberal parties all delivered their opening electoral speeches.
0
Sep 11, 2019 12:56 PM By: Canadian Press 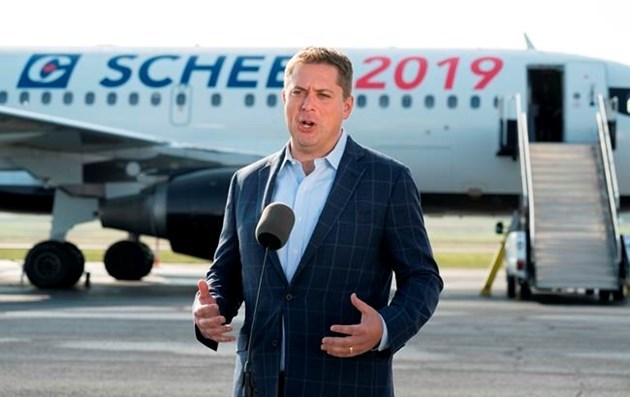 The latest developments as federal party leaders officially kick off campaigning for the Oct. 21 election (all times Eastern):

Jagmeet Singh says the election comes down to a clear question for voters: Who can you count on?

The NDP leader believes the answer is him, telling supporters he plans to talks about providing services like pharmacare and dental care, vision care and mental health services, but only by taking on "lobbyists" and "corporate interests."

Singh says Liberal Leader Justin Trudeau and Conservative Leader Andrew Scheer will say one thing on the campaign trail, but then do something else behind closed doors once in office.

The bulk of the NDP platform has been out for months, including putting a tax on the super wealthy to pay for some of the party's promises.

Singh is in London, Ont., and speaking about his time in the city and some of the difficulties he faced and the people who helped him through it, reminding him that Canadians believe in taking care of each other.

He also says how as a child, he never imagined that someone who looked like him could one day run to be prime minister and now he has kids coming up to him saying they believe they can do anything.

Justin Trudeau says Canadians get to vote for the kind of Canada they want to live in next month — by giving his party another term, or taking a step back with the Conservatives.

After emerging from Rideau Hall, the Liberal leader spoke about how poverty rates have dropped and job creation is on the rise and attributes both to his party's policies, including the Canada Child Benefit.

He says politics is, at the end of the day, about people, and voters deserve a real plan for their future.

Trudeau began his first remarks of the campaign by recalling the victims of the Sept. 11, 2001 terrorist attacks on the United States.

But in taking questions, the SNC-Lavalin affair took top billing.

Asked what his government is hiding, Trudeau says his office gave the largest waiver of cabinet confidences in Canadian history but added anything more.

Trudeau will ask Payette to dissolve Parliament and call for a general election, which the law says must be held Oct. 21.

NDP Leader Jagmeet Singh is in London, Ont. to launch his party's campaign, while Green Leader Elizabeth May is joining candidates for an early-morning rally in Victoria, B.C.

In a statement, May says the campaign comes at a "pivotal point in history," adding that climate change is on the minds of many voters.

She makes a pitch for voters to back her party and elect MPs who won't "back down, compromise or waffle."

There also appears to be the first hiccup of the campaign: the weather has forced Conservative Leader Andrew Scheer's campaign plane to fly instead to Quebec City and bus to Trois-Rivieres, Que., for his first rally.

Conservative Leader Andrew Scheer is taking aim at Justin Trudeau over the SNC-Lavalin affair ahead of the prime minister's visit to Rideau Hall to officially launch the federal election campaign.

Scheer is calling Trudeau a "liar," arguing the Liberal leader has lost the moral authority to govern and saying his goal for the next five weeks is to convince Canadians of that.

Much of his attack arises from a report in the Globe and Mail that cabinet confidentiality is preventing people from speaking to the RCMP as the force considers a possible investigation into obstruction of justice.

With the Conservative campaign plane behind him, Scheer also says he plans to spend the next five weeks or so talking to Canadians about the Tories' platform.

Scheer is now off to Trois-Rivieres, Que., for his first campaign event.

Trudeau is scheduled to arrive at Rideau Hall at 10 a.m. to ask the Governor General to dissolve Parliament and call for a general election.