The exception to the traditional 14-day quarantine for anyone entering Canada is meant to remove a hurdle to the candidacy of Toronto, Edmonton and Vancouver as "hub" cities if the league is able to return to play later this summer.
Jun 20, 2020 7:43 AM By: Canadian Press 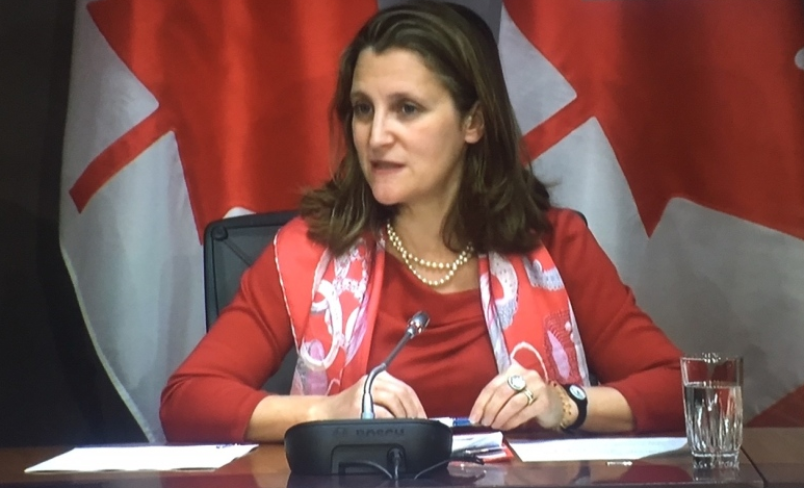 The exception to the traditional 14-day quarantine for anyone entering Canada is meant to remove a hurdle to the candidacy of Toronto, Edmonton and Vancouver as "hub" cities if the league is able to return to play later this summer.

The cohort quarantine would keep players separate from the general public, rather than require players to isolate individually for the two-week period.

Freeland said the cohort quarantine would involve regular screening. It would be crucial that the directives of medical officers are closely followed, she added.

When asked what would happen if a player or staff member tests positive, Canada's chief public health officer said instructions from the specific local health authority must be followed.

"That's the primary approach. If there was a positive test identification, that is linked to the local public health response," Dr. Theresa Tam said.

"I think that's the critical aspect of it. Through the protocol which is continuously reviewed, the idea is through regular testing to reduce the actual impact of the number of people that would have to be removed from the game itself. I think ultimately the decision has to be based on the public health assessment at the time."

Dr. Deena Hinshaw, Alberta's chief medical officer of health, said if Edmonton is selected and a player or staff member tests positive, local health authorities would be in close contact with the NHL to determine the next steps.

"Whatever the circumstances end up determining, we would ensure there would be no risk to the public and no risk for spread outside that particular cohort," she said.

On Thursday, the Tampa Bay Lightning closed their facilities after three players and additional staff tested positive for the novel coronavirus.

The NHL said Friday that more than 200 players have been tested during voluntary workouts at club facilities since June 8, with 11 testing positive.

"I believe the protocols we have in place would effectively prevent transmission," she said.

"To our minds as long as public health considerations are suitably addressed, which is what we've seen premised on the documents we've had to look at, we look forward to seeing how the decision is made and look forward to being able to welcome people safely in our city," she said.

Toronto Mayor John Tory said having the city picked could be a "morale boost" before taking a playful shot at other candidates.

"I believe we're the hockey capital of the world. I've mentioned that at couple of NHL functions I've gone to and some people from elsewhere take issue with that, but that's their problem," he said.

The three Canadian cities, along with Chicago, Columbus, Dallas, Las Vegas, Los Angeles, Pittsburgh, and Minneapolis/St. Paul, are in the running to be hub cities.

The NHL plans to start training camps for the 24 remaining teams on July 10 and hopes to resume play later in the summer.