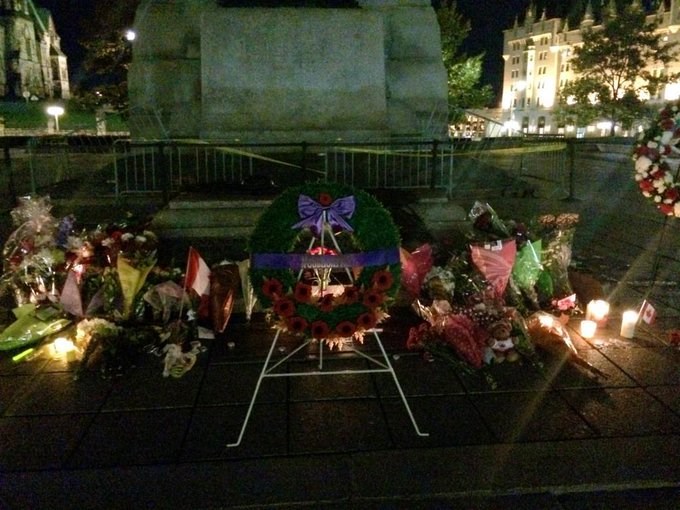 Wreaths, flowers and candles were laid at the National War Memorial after it re-opened to the public on October 24, 2014. Photo/1310 NEWS file photo

It is now five years since an armed gunman shot and killed a soldier at the National War Memorial, before storming Parliament's Centre Block, where he was shot dead.

Corporal Nathan Cirillo, 24, a sentry at the Tomb of the Unknown Soldier, was fatally shot on October 22, 2014.

The shooter, Michael Zehaf-Bibeau, was killed after he entered Centre Block and opened fire. He was shot and killed by the House of Commons Sergeant-at-Arms, Kevin Vickers.

Three people were taken to hospital with minor injuries.

"On this solemn anniversary, we remember Corporal Cirillo, along with Warrant Officer Patrice Vincent who was killed two days earlier in a separate attack in Saint-Jean-sur-Richelieu, Quebec," Prime Minister Justin Trudeau said in a written statement, Tuesday morning. "As we remember these two brave members of our Canadian Armed Forces, we also thank the bystanders who provided first aid, as well as the first responders and members of our Parliamentary family who put their safety at risk to protect us."

In his remarks to the Commons the day after the attack, then-Prime Minister Stephen Harper quickly condemned the shooting as a "terrorist attack."