Data from Mainstreet Research shows the city going from five Liberal MPPs to just one, while the Ontario Progressive Conservative Party is expected to dominate local rural ridings.
Jun 6, 2018 2:51 PM By: Mike Vlasveld 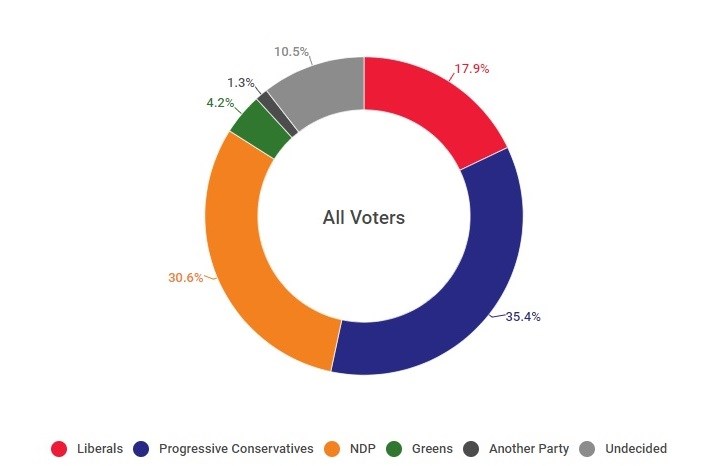 Ottawa will be represented by many new faces at Queen's Park this year, if Mainstreet Research's final election poll data rings true.

But President and CEO of the data firm Quito Maggi told 1310 NEWS' The Rick Gibbons Show, some of the races are still too close to call.

Ottawa-Centre is also an interesting riding, according to Maggi, where long-time Liberal MPP and Ontario Attorney General Yasir Naqvi could lose out to the New Democratic Party's Joel Harden.

"Yasir traditionally out-performs the polls -- in the last two elections, 2011 and 2014, he out-performed our polls by a couple of points," the pollster explained. "He has tremendous ground game and organization, but we had him about 15 points back of the NDP as recently as a couple of days ago."

Maggi added that Naqvi had cut that lead to about 10 points in the most recent poll, but he still believes that riding will turn orange unless there is some significant shift in the next 24 hours.

Ottawa-Vanier is the only riding in the city showing a substantial lead for the Ontario Liberal Party. Nathalie Des Rosiers became MPP for that riding through a by-election in 2016, following the resignation of Madeleine Meilleur. She's being challenged by Lyra Evans of the NDP and the PC's Fadi Nemr.

Maggi said all local rural ridings look like they will go to the Tories, which is not a big surprise, as there are incumbent PC's running in Renfrew-Nipissing-Pembroke, Leeds-Grenville-Thousand Islands and Rideau Lakes, as well as Stormont-Dundas-South Glengarry.

Overall, Mainstreet Research is predicting the NDP to be able to dominate in regions such as Windsor, London, Hamilton and parts of the Greater Toronto Area, but ultimately the data firm sees the election ending with an Ontario Progressive Conservative Party majority government.

Listen to the full conversation with Mainstreet Research President and CEO Quito Maggi: