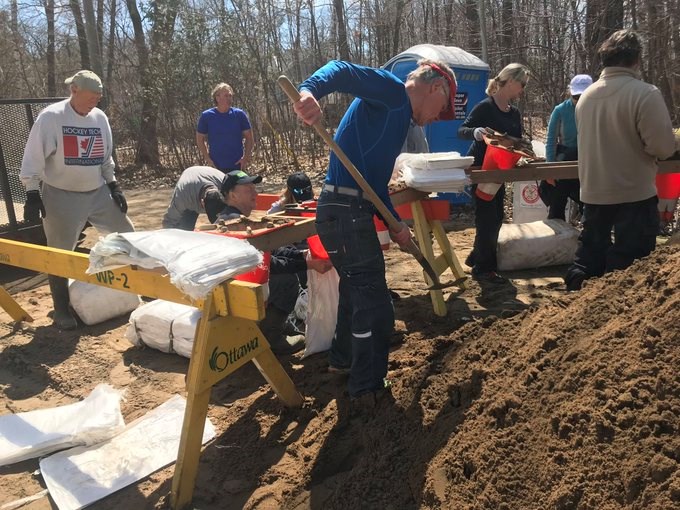 A volunteer non-profit group of veterans has partnered with the City of Ottawa to help in the response to the Ottawa River floods.

Team Rubicon Canada is mostly made up of former soldiers and other military personnel, who have a lot of experience helping in disaster zones.

"The military has been involved with floods as long as I can go back," said Christian Lemay, a public information officer with Team Rubicon. "I can remember being in the military and being involved in the Winnipeg floods in the '90s."

While many soldiers have experience filling sandbags and building sturdy walls to hold back floodwaters, they also have experience organizing a crew and developing strategy.

"A lot of people want to come in and help, but most of the time they're not experienced in working as a group," Lemay told 1310 NEWS. "Or in having a priority of authority and sequencing what needs to be done in which order, in order to build the walls and make sure they're properly located and properly built, in order for the wall to sustain the rise of the water levels on the river."

Team Rubicon was founded in response to the Fort McMurray wildfires in 2016. The group previously assisted in the response to the tornadoes in Ottawa and Gatineau last September, clearing away debris and making some repairs to homes.

Lemay said the group plans to keep working after the floodwaters recede, helping with the clean-up.

Flooding expected to exceed 2017 levels in Ottawa's west end
Apr 25, 2019 7:03 AM
Comments
We welcome your feedback and encourage you to share your thoughts. We ask that you be respectful of others and their points of view, refrain from personal attacks and stay on topic. To learn about our commenting policies and how we moderate, please read our Community Guidelines.