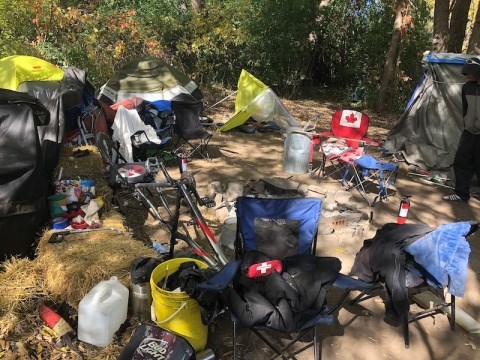 Two city councillors say residents living in a tent city near Bayview's LRT station are being told to leave due to concerns for their safety after a recent fire.

In a joint statement Saturday, Catherine McKenney and Jeff Leiper said the National Capital Commission and the City of Ottawa decided the makeshift community was no longer safe for the residents and for emergency personnel.

"While we do not agree with the removal, it is no longer in our power to stop it." wrote McKenney and Leiper.

A statement from @JLeiper and me on the removal of the tent city. pic.twitter.com/28PCPfLJHV

"This is a tragedy on many levels. These are a group of residents who lost their homes due to a fire in April who, unable to find affordable housing in their community, chose to set up an encampment together. They are now losing this site because of another fire."

Residents in the makeshift community moved to the area outside Bayview station after a fire at a rooming house left them homeless.

They posted a statement to Overdose Prevention Ottawa, saying they will be evicted on Monday, December 2 at 10 a.m., or a trespass order will be enforced.

Shelley VanBuskirk, the city's director of housing services, tells 1310 NEWS in a statement Sunday the camp's residents were given a "verbal notice of trespass" Friday afternoon.

Residents say the fire that drew the attention to them on Saturday November 24 was a 'targeted arson,' and was "Intentionally and purposefully started by someone who was not a resident and wanted to displace those of us who reside here."

"This place is our home," the statement said.

The NCC has since backtracked, saying they will not be evicting residents until they can find housing for them.

McKenney and Leiper jointly say that residents living in the tent city was due to a critical lack of affordable housing in the city.

"It is unacceptable that the only option for those without housing is to sleep on the streets or shelter. We continue to call on all three levels of government to do better. We have all failed these residents and the hundreds who slept outside or in shelters last night and will continue to do so until this is treated as the emergency that it is."

Catherine McKenney has urged the City of Ottawa to declare a state of emergency on homelessness.

Barrhaven home destroyed by two-alarm fire
Feb 21, 2020 5:21 AM
Comments
We welcome your feedback and encourage you to share your thoughts on this story. We ask that you be respectful of others and their points of view, refrain from personal attacks and stay on topic. To learn about our commenting policies and how we moderate, please read our Community Guidelines.