"ClubLink put the ball in play, and it's up to the city to step up and hit it," said Barbara Ramsay, chair of the Kanata Greenspace Prevention Coalition.
0
Oct 8, 2019 5:06 PM By: Chris Kurys 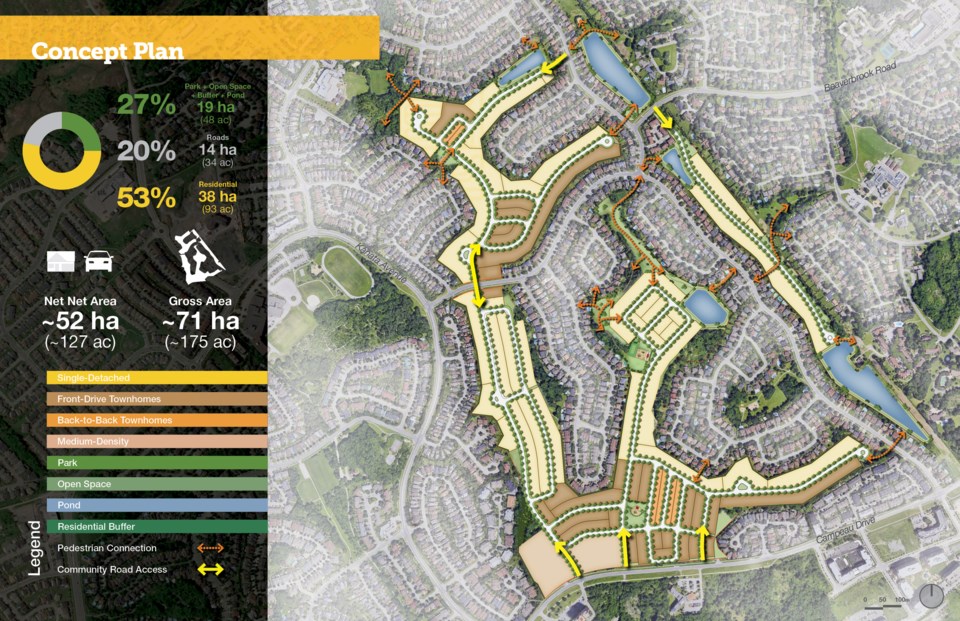 The Kanata Greenspace Protection Coalition is hoping the City of Ottawa will be on its side, now that ClubLink has officially submitted its plan to redevelop land at the Kanata Golf and Country Club.

On Tuesday, the club owners, along with partners Minto Communities and Richcraft Homes formalized their application to turn the golf course into a suburban neighbourhood. The vision was first put forward in 2018.

The heart of the disagreement between the course owners and the community is "the 40 per cent agreement," which dates back to 1981, and was jointly signed by ClubLink when it bought the course in 1996. The agreement states that 40 per cent of the development area must be used for green space "in perpetuity."

"Many neighbours and residents bought the property along the golf course because they took comfort in the fact that there were signed agreements in place and they were to be respected," explained Barbara Ramsay, chair of the Kanata Greenspace Protection Coalition.

Ramsay added that it's frustrating when the corporations go back on their word.

"It really is offensive. When it's decided that there is a profit centre here and [ClubLink] are arbitrarily choosing to disavow the agreement," she said.

In a release, ClubLink states that "golf courses are struggling across the country, participation levels have declined and people are playing less golf while operating costs continue to rise."

Looking at the situation optimistically, Ramsay said maybe it's good that the developers have finally put their proposal forward, because ultimately it's up to the City of Ottawa.

She's hopeful the city will side with her group.

"ClubLink put the ball in play, and it's up to the city to step up and hit it," said Ramsay.

The City of Ottawa has stated that it is looking to honour the 40 per cent agreement originally signed. The original 1996 deal also allowed the city the rights to take over the golf course if the owner was not interested in running it.

Councillor for Kanata-North Jenna Sudds has explained that the formalized application puts two paths in motion.

First, planning staff will receive and review the application. Once the application is complete, the proposal will be put online and the community will be notified.

Second, legal counsel has been retained by the city, who will be filing an application with the Superior Court to request a determination on the city's contractual rights in the 40 per cent agreement.