'I believe we were purposely run out of time:' Ottawa Fury FC forced to suspend operations

OSEG's president feels the franchise is being pushed out of Canada by soccer's governing bodies.
0
Nov 8, 2019 10:58 AM By: Mike Vlasveld 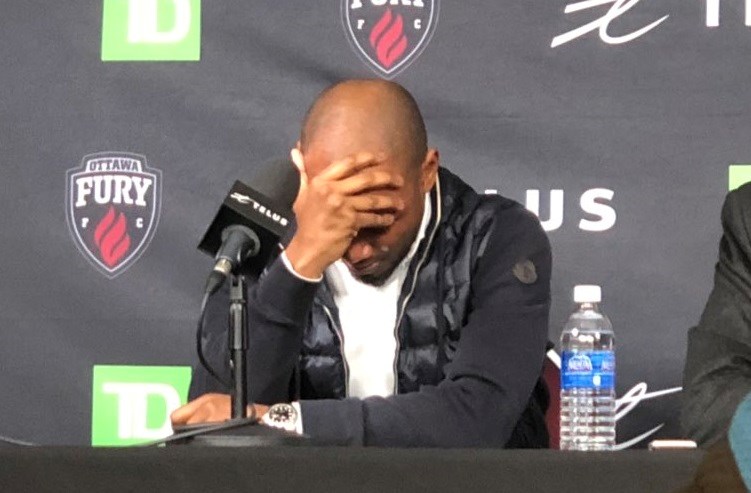 Ottawa's professional soccer club says, despite its best efforts, it was unable to get the required sanctioning from governing bodies to participate in the United Soccer League (USL) Championship in 2020.

"On the pitch, soccer may be the beautiful game, but behind the scenes, in the hierarchy of soccer's regulatory bodies, it's sometimes a different story," said Mark Goudie, President and CEO of Fury's parent company, Ottawa Sports and Entertainment Group (OSEG). "I feel angry, betrayed and deeply sorry for our fans, players, coaches and staff that their club will not operate in 2020. I believe we were purposely run out of time."

All professional soccer clubs based in Canada need sanctioning from Canada Soccer, the US Soccer Federation and CONCACAF to play in a league that is based in the USA. This used to be a formality, however, as of last year, such was not the case for Ottawa Fury FC.

In 2018, the year preceding the inaugural Canadian Premier League (CPL) season, the club says it became apparent that it was expected to become a member of the CPL. After careful consideration, Fury FC decided to remain in the thriving USL, the largest division II league in the world, and a league in which it had made a major investment.

To receive sanctioning from Canada Soccer and CONCACAF for 2019, after repeated delays, Fury FC petitioned the Court for Arbitration and Sport (CAS) in Switzerland. On the eve of the court hearing, CONCACAF announced that it would not object to the sanctioning of Fury to play in the USL in 2019.

This year, Fury FC began sanction discussions with Canada Soccer in March, and submitted a multi-year sanctioning application to Canada Soccer on April 25.

Although the multi-year request was rejected, the club did receive confirmation of a 1-year sanction for 2020 from Canada Soccer on May 17 -- step one in the three-phase approval process.

Despite an extended deadline of November 1 for the Fury to be included in the 2020 USL schedule, a deadline that Canada Soccer was aware of, Fury FC says Canada Soccer waited until late September before forwarding the its submission to the US Soccer Federation and CONCACAF.

To date, no sanctioning has been provided.

Ottawa Fury FC says there has been no indication that sanctioning will be granted and no sign of a timeline where the governing bodies will decide on sanctioning. As a result, the club says it must suspend operations and will consider all of its options, which could include relocation of the club to the United States.

"I think it's apparent that soccer's hierarchy is trying to force Fury FC out of the USL," said Goudie. "The governing bodies do not respect the investment that we have made in Canadian soccer, our contribution to the development of soccer in Canada or the value of our USL franchise. The USL has been very supportive and has vigorously lobbied the US Soccer Federation and CONCACAF on our behalf, but match and TV schedules must be set, venues booked, coaches hired, players signed and tickets sold."

"Canada Soccer is extremely disappointed with the announcement that the Ottawa Fury FC will suspend operations. As the national governing body for the sport of soccer in Canada, we have always supported the growth and development of all levels of soccer, including the professional game in our country with Canada Soccer having provided cross border sanctioning to Ottawa Fury FC in 2018 and 2019 for the subsequent seasons.

In respect of international protocols for sanctioning, Canada Soccer provides approval through its Board of Directors on an annual basis for sanctioning of the participation of all Canadian soccer clubs in cross border leagues. In 2019, Canada Soccer has brought forward to US Soccer and Concacaf a request for the sanctioning of 13 teams across six leagues, including the Ottawa Fury FC in the USL, to compete for the 2020 season.

Ottawa Fury FC were informed of the approval by Canada Soccer’s Board of Directors on 17 May and that the next steps in the process would continue in accordance with Concacaf timelines. As recent as 7 November, Canada Soccer continued to work through the subsequent approval process with US Soccer and Concacaf to facilitate a decision being made by the other governing bodies."

"We are deeply disappointed," said USL President Jake Edwards. "Ottawa Fury FC is an extremely professional, well-run organization and it's frustrating to see them treated in this way. We are extremely grateful for the contributions of the entire Ottawa Fury FC organization, including John Pugh, Mark Goudie, the club's wider ownership group, and each and every supporter of the team these past few seasons. They have been a critical part of USL's growth."

Ottawa Fury FC was founded in 2014 as an NASL expansion club. In 2015, the team won the NASL Fall Season title and advanced to the League final against the New York Cosmos, dropping a hard-fought 3-2 decision. In 2017, Fury FC moved to the United Soccer League and this past season, hosted its first USL Championship playoff match.

"On behalf of Ottawa Fury FC, I would like to thank all the players and coaches that have come through the Ottawa Fury system, the sponsors and fans that supported us, the media that covered us, and everyone else whose support made it all possible," said Goudie. "I'd also like to thank General Manager Julian de Guzman and Assistant General Manager Carrie McKay for their hard work and dedication. Most of all, I'd like to thank John Pugh, who started the Ottawa Fury organization 16 years ago and selflessly invested in the development of youth and professional soccer in Canada. It is truly unfortunate that John is unable to continue the noble project that he started and has dedicated a fair chunk of his life to."