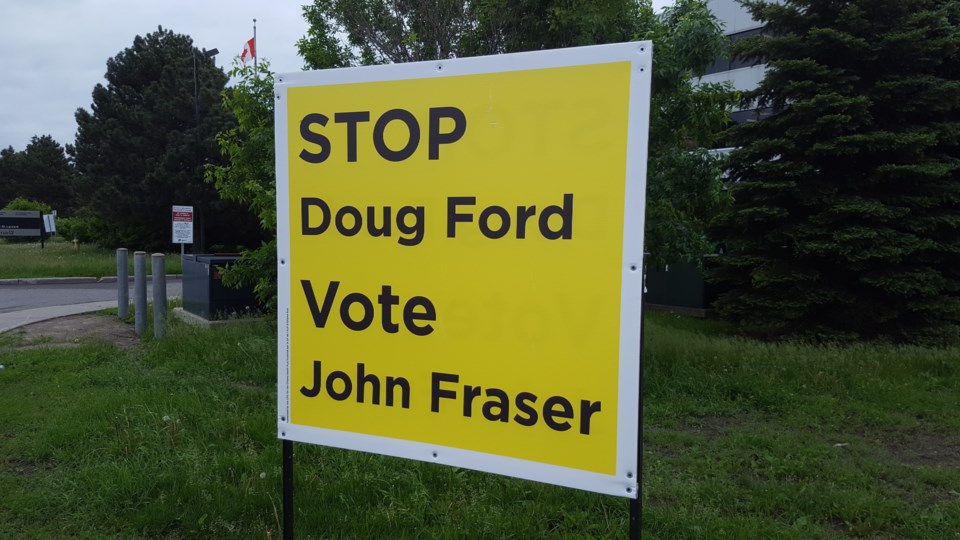 Large, yellow signs went up in multiple locations in the riding of Ottawa South, Monday night, authorized by the campaign of the local Liberal candidate. (jason White/1310 NEWS)

Large yellow signs, encouraging voters to choose their local Liberal candidate, have gone up in an Ottawa riding as the incumbent claims he is the candidate with the best chance of defeating the local PC candidate.

"Our own internal polling shows it's a tight race between myself and the Doug Ford Conservative here in Ottawa South," said John Fraser, Ottawa South Liberal candidate.

The signs were posted by the Fraser campaign on Monday night. Fraser denies the yellow signs -- without logos -- are an attempt to distance him from the party or its leader.

"No, I think it makes them quite noticeable," Fraser told Ottawa Today with Mark Sutcliffe on 1310 NEWS. "I used to work for Loblaws and if you can remember, a long time ago, yellow and black were their colours -- that's the most visible way of getting someone's attention."

Karin Howard is the riding's PC candidate. Her campaign has not returned 1310 NEWS' request for comment.