New Democrat, Green and Independent MPs joined with the Liberals on Wednesday, defeating a Conservative motion to create a special anti-corruption committee that would have probed alleged examples of the government using pandemic relief programs to funnel money to its friends.
Oct 21, 2020 9:43 PM By: Canadian Press 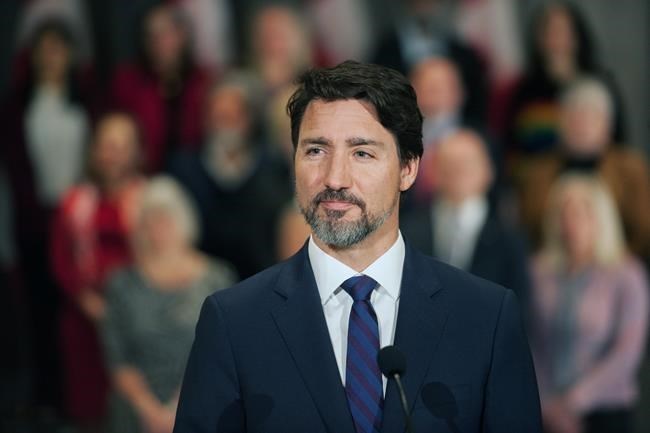 Justin Trudeau's minority government survived its most serious confidence test yet Wednesday, but opposition resentment over the Liberals' high-stakes brinkmanship may make it more difficult to avoid defeat in future.

New Democrat, Green and Independent MPs joined with the Liberals on Wednesday, defeating a Conservative motion to create a special anti-corruption committee that would have probed alleged examples of the government using pandemic relief programs to funnel money to its friends.

But those opposition MPs made it clear they were voting strictly to avoid plunging the country into an election in the midst of a deadly second wave of COVID-19, and they put the blame squarely on Trudeau for pushing the matter to the brink.

Trudeau had declared that he would regard the motion as a matter of confidence, which meant the government would have fallen had the motion passed.

In the end, it was defeated by a vote of 180-146, with Conservative and Bloc Québécois MPs supporting it.

"People need help right now. They need confidence in the future. They’re not looking for an election. So New Democrats will not give Prime Minister Trudeau the election he’s looking for," NDP Leader Jagmeet Singh said prior to the vote.

Similarly, Green Leader Annamie Paul accused both the Liberals and Conservatives of playing a "high-stakes game of chicken" and asserted, "this is not the moment for us to plunge our country unnecessarily into an election."

Independent MP Jody Wilson-Raybould, a former Liberal minister, explained her vote on Twitter, saying the government's decision to make the vote a choice between "a potential election during a spiking pandemic or seeking to avoid transparency/accountability for ethical wrongdoings demonstrates an utter lack of leadership."

"Imagine risking the health of Cdns to avoid taking responsibility. Shameful," she tweeted.

Until now, the government has managed to work collegially with the smaller parties, particularly the NDP, to secure support for pandemic relief measures and ensure its continued survival.

But Singh accused the government Wednesday of refusing to negotiate a reasonable alternative to the Conservative motion, which he agreed went overboard in pursuing what amounted to "some sort of witch hunt" against Trudeau's family.

"What became really clear early on is that the Liberals weren't looking for a deal. They were actually looking for a way to go to an election," he said in an interview after the vote.

While he said the NDP will continue to look for ways to make the minority Parliament work, Singh said the government's continued survival depends on the Liberals, and New Democrats will judge each confidence vote on a "case by case" basis.

"The Liberals have shown today that they're less interested in making things work ... and more interested in posturing for an election."

Bloc Québécois House leader Alain Therrien blasted the NDP on Wednesday as a government "lapdog" and expressed hope that the NDP "finds a spine and that they come to the conclusion that this government does not deserve the support of the opposition."

Conservative Leader Erin O'Toole said his party will not give up demanding answers to what it considers government corruption.

“This committee would have given all parties the ability to uncover the full details of the Liberal government’s pandemic spending and blatant favouritism," he said.

"We know there must be something pretty damning in the documents for the Liberals to have gone to these lengths to prevent Canadians from learning the truth about the special treatment they give to insiders."

For his part, government House leader Pablo Rodriguez hailed the vote as a "good decision" that allows the government to focus on the pandemic.

Rodriguez argued that the Conservatives' proposed committee would have paralyzed the government, tying up ministers and public servants who should be devoting their time to helping Canadians weather the pandemic.

The failed motion would have created a committee with broad powers to repeatedly call witnesses, including the prime minister and other ministers, and to demand documents on a range of issues, including the speaking fees earned by Trudeau's mother and brother over the past 12 years.

But Singh, who objects to the proposal to have a Liberal MP chair that committee, said his party won't go along with it. Instead, the NDP will attempt to pursue the WE controversy and other alleged misuses of public funds through the Commons ethics committee.

That committee, which is chaired by a Conservative MP, was one of two that were stalled for the past two weeks as Liberals filibustered opposition attempts to reopen their investigation into the WE Charity affair. Ethics and finance committee probes into the matter were shut down when Trudeau prorogued Parliament in August.

The controversy revolves around the government's decision last June to pay WE Charity $43.5 million to administer a now-cancelled student service grant program, despite Trudeau's long-standing family ties to the organization.

Trudeau has said public servants recommended WE as the only group that could manage the program. He has nevertheless apologized for not recusing himself from the decision to involve WE, as has former finance minister Bill Morneau, who also has close family ties to WE.

Both Trudeau and Morneau are under investigation by the federal ethics commissioner for possible violations of the Conflict of Interest Act.