For urban farmers and quarantine gardeners alike, worm compositing could be the next big step in sustainability, says Akil Mesiwala.
Jul 22, 2020 9:10 AM By: Kieran Delamont 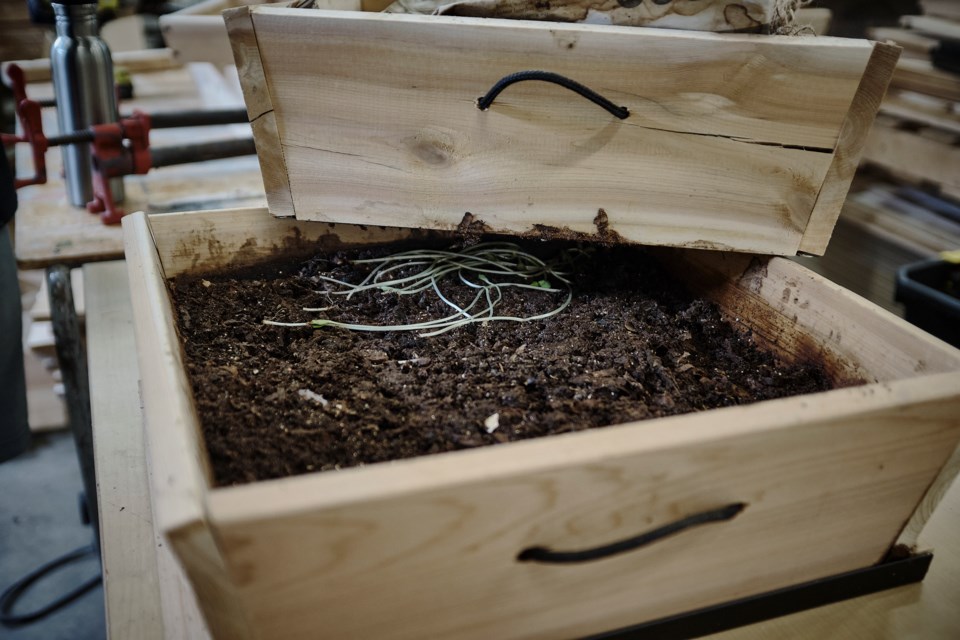 The Box of Life, displayed in the company's workspace. Kieran Delamont/OttawaMatters.com

By his own account, Akil Mesiwala says he was not always much of a bug guy. And yet he is, most days, nestled deep into the labyrinth-like workshop at Makerspace North, knuckle-deep into a bin full of hungry red wiggler worms, sweeping their dried wormy bodies off the floor, surrounded by lumber ready to be fabricated, flat-packed and shipped to be turned into a home compost bin that, from the eye of the worm, looks like a warm and cozy home indeed.

They are called the Box of Life. In the simplest terms, the Box of Life is a home composting system designed with the apartment gardener in mind — a box that can live on your counter, collect your food waste, and return nutrient-rich compost to you over time.

But instead of a more passive composting system where food waste decomposes over time, the Box of Life contains a secret weapon. Dozens of them, actually: a small colony of red wiggler worms, eating and defecating their way through whatever food waste you throw at them, producing ‘worm castings’ — basically worm poo — that Mesiwala calls “a complete fertilizer.”

The Box of Life works using a ‘vertical migration system’ in which three mesh-bottomed boxes, each roughly the size of a vinyl turntable, are stacked on top of each other and gradually filled with food waste, wet newspaper, and worms. As the boxes fill, another is added on top; the worms move up towards the fresh waste, and leave behind processed compost. By the time the third layer is full, the bottom layer is removed, containing the rich castings.

“I simply wanted to show people how to compost,” Mesiwala tells Ottawa Matters. “Many people look at the internet and get overwhelmed.” 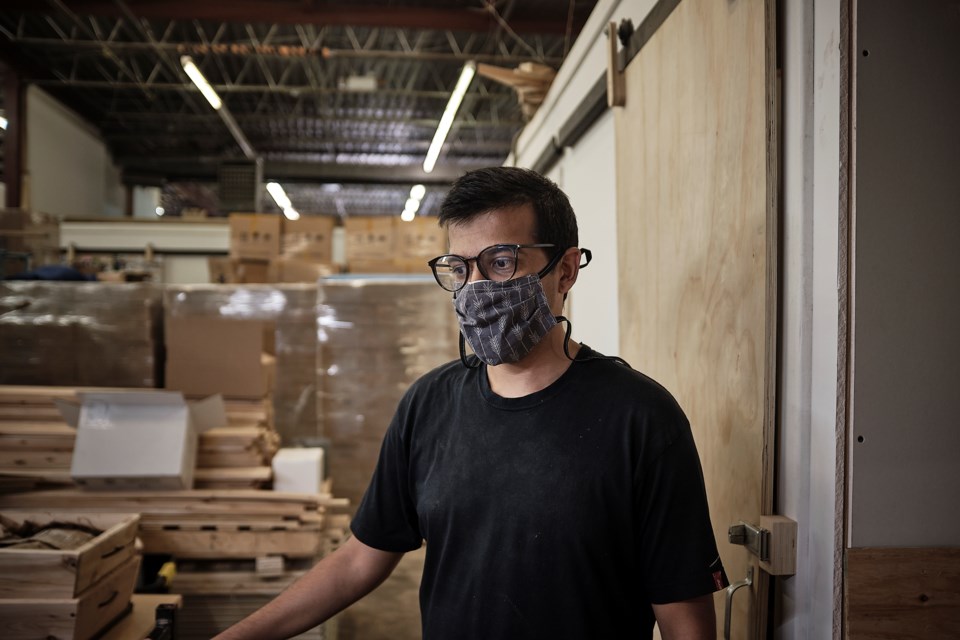 Akil Mesiwala, in his Box of Life workspace, on July 16, 2020. Kieran Delamont/OttawaMatters.com

An engineer by training, and with a work background in the sustainability industry, Mesiwala came to Ottawa last year from Boston, and with the help of the WorldSkills entrepreneurship program, launched the Box of Life last fall, mostly selling the boxes to family and friends as he tinkered with the design. (Building a worm composting system delivers some fun surprises; in an early prototype, the worms ate clean through the twine handles on the box.) Pre-COVID, he was running workshops in the space, having people build the boxes themselves and teaching them the ins and outs of worm composting.

Now, having landed on a design, Mesiwala is able to cut and ship all the wood, and sell the Box of Life as a DIY project, assembled like a piece of IKEA furniture.

“You tend to have a deeper relationship if you build it yourself,” he explains. The box goes for around $150 (worms not included) — what Mesiwala calls “the least I could sell it for” — and, once the process is started, is a real asset for the home gardener, producing a new batch of compost every six weeks or so.

The Box of Life is the tip of the spear for Mesiwala, the gateway drug to a deeper and more sustainable relationship with food and food waste. Even if you don't already have a garden, composting is a better way to deal with food waste — and it's only so long that you can look at compost before wondering how you could put it to good use.

“I think gardening changes people,” he tells me, and by extension he also means that compostingchanges people, too. To oversee this process of turning waste into life can flip something in a person, transforming them from run-of-the-mill garbage bin warriors into card-carrying indoor compost heroes (which is, seriously, what the community calls one another).

“It’s not crazy to have worms in your home,” Mesiwala says. “It’s not icky … I was amazed at how clean the whole process was.” 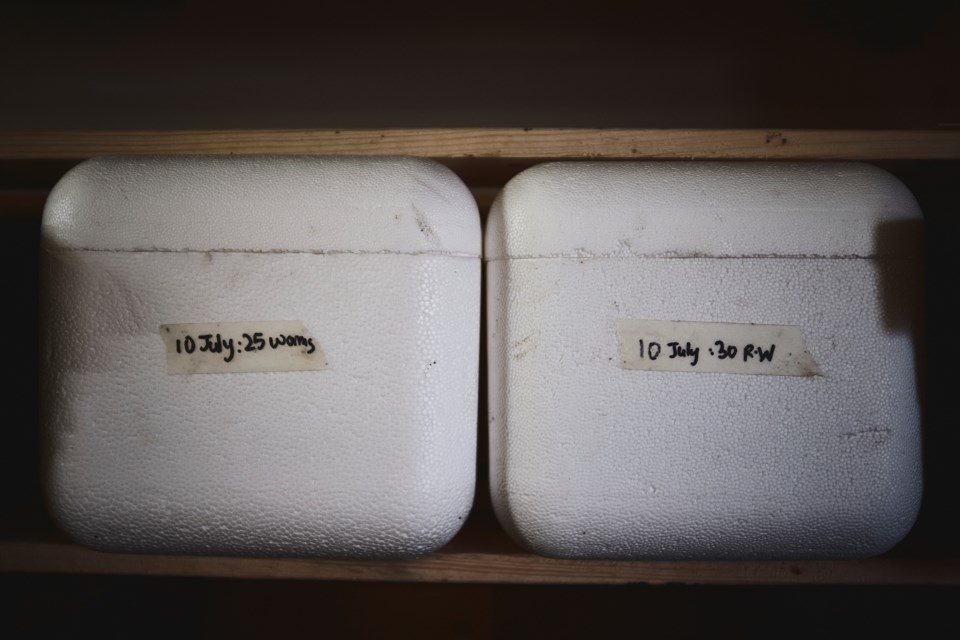 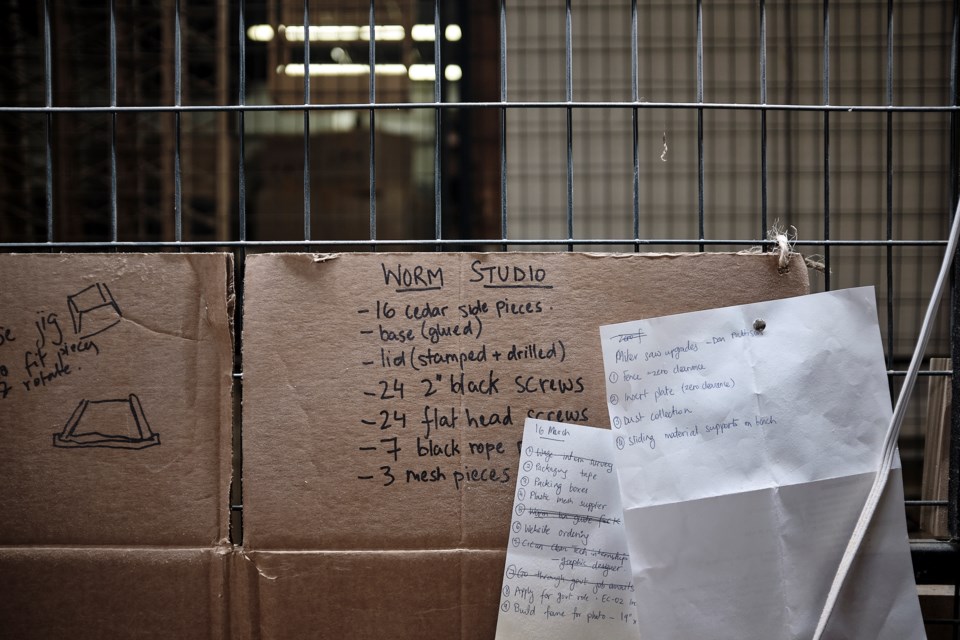 All of this might be coming together at just the right time, too, as the country (and the world) went into lockdown and many people, perhaps with food security or boredom on the brain, started their own gardens. “Anyone can do it,” he says. Lots of people did. As more and more people look to community plots, balcony gardens, and urban farming, Mesiwala hopes that more thought will be given to sustainable ideas like worm composting.

“If you find your garbage stinky, you should put it in a worm bin,” says Mesiwala.

Mesiwala sees a future for the Box of Life that is inseparable from a future where composting in your own home becomes a regular fact of life. Locally, he thinks ahead to what the city will have to do when the Trail Road landfill is full, and needs to be replaced. Can we, he wonders, delay that as much as possible, by turning more of our waste into compost? Could composting, something he seems to regard as a forgotten public act of sustainability, be the key to unlocking a greener future for the city?

Time will tell. For now, Mesiwala is keeping it simple, trying to impress upon people how easy the change can be, how easily your food waste can be turned into something you grow with.

“Life finds a way,” he says, quoting Jurassic Park. “And life, it comes from compost.”

The road back, for many businesses, will be long — but the city’s small businesses are filled with great ideas, adaptations and creativity, and it’s what will help us all move forward. If you know of a business (or if you own one) working hard to build and serve their community, even under tough circumstances, Ottawa Matters wants to hear about it. Email delamont.kieran@gmail.com.