What started as a fundraiser for the summer pow wow has turned into a full-fledged business for Beaudry, and a chance to honour her Indigenous role models.
Sep 2, 2020 9:32 AM By: Kieran Delamont 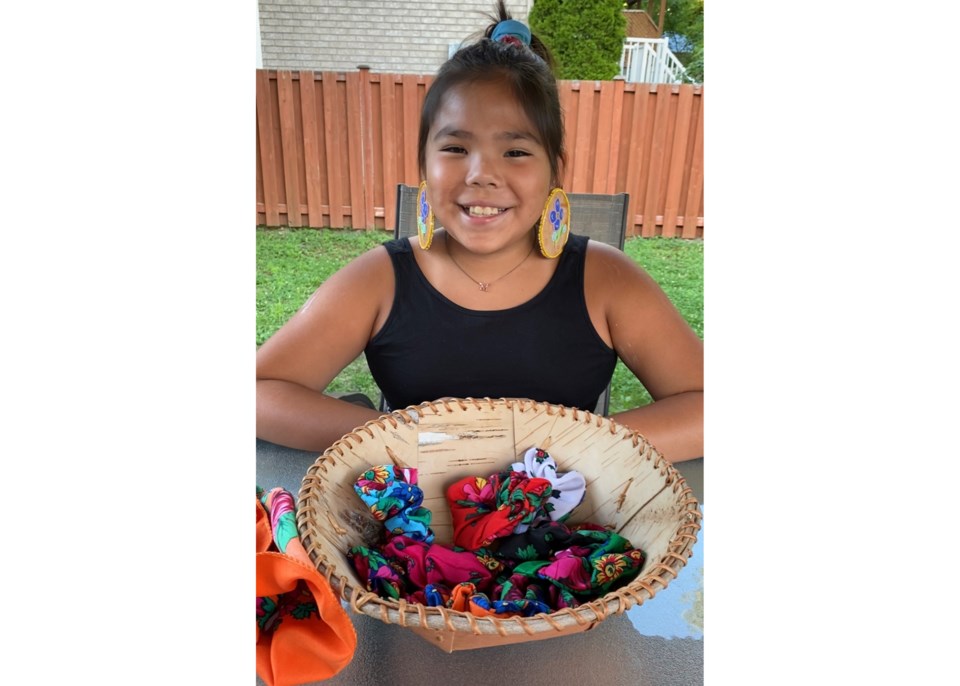 Mya Beaudry, 9, in front of a collection of Kokom Scrunchies. (Supplied by Marcie Portelance.)

It has been an auspicious start for Mya Beaudry: just nine years old and already plotting a path towards becoming a titan of the local scrunchie industry.

Hoping to host a ‘youth special’ at Ottawa’s Summer Solstice Pow Wow — essentially a small dance session, where the host is traditionally expected to have gifts for participants; a large pow wow would have dozens of such specials — Beaudry had to fundraise. She did it with something small, distinctive, and instantly recognizable in many Indigenous cultures: scrunchies made from kokom scarves, a colourful, floral pattern often associated with grandmothers. (Kokom is the Algonquin word for grandmother, Beaudry’s mom, Marcie Portelance, explains. Both are Algonquin from Kitigan Zibi.)

“We made these because, a long time ago, Kokoms would wear kokom scarves outside,” Beaudry says. “So I really wanted to make kokom scrunchies. … I’ve seen a lot of people wearing scrunchies, it was very in for the year. Plus, I love scrunchies!”

Beaudry started making Kokom Scrunchies in early October last year, aiming to raise enough money for this year’s pow wow, which had not yet been affected by COVID. She keeps things as simple as possible in a world dominated by drop shipping schemes aplenty — selling what has already been made, in the true artisan style.

“We posted them on Instagram, and it just sort of took off that way,” Portelance says. The ‘Sunday drop’ — all the new scrunchies that Beaudry had made that week that were ready to go — became popular enough that they would sometimes sell out completely. “People would get so excited, which got Mya excited,” Portelance says.

Introducing Kokom Chick $10 each available on kokomscrunchies.ca This week’s scrunchie is name after cousin Chick. She is always willing to help those in need and goes above and beyond 😊She loves to dance, tell stories and has the biggest heart ❤️

For young Beaudry, what started as a fundraiser became a first-hand lesson in running a business. After hitting her fundraising goal, she’s now been building Kokom Scrunchies as a little home business.

For Beaudry and Portelance, it’s important never to stray too far from the community focus of the business. “It started off as a way to give back, and we want to keep it that way,” Portelance says. Every scrunchie, for instance, gets named in an effort to “recognize all the good other Indigenous women and girls are doing,” she adds. Beaudry shows off the “Kokom Dana” scrunchie, explaining its etymology: “she’s my aunt, and I’m really inspired by her.”

Portelance plays a support role, and gradually her daughter has become more independent in the venture that is part business, part on-the-job learning experience. “Mya’s like the creative mind behind Kokom Scrunchies, and I’m now like her support network,” Portelance explains. Lately, they’ve handed the responsibility for inventory over to young Beaudry. “As she gets older, she gets more responsibility.”

COVID has meant that Beaudry can’t do what she really likes though — selling them in person, which she says is her favourite part. “Putting her in that situation, she really thrives,” says her mom. Beaudry also says that people have asked her whether she plans to make masks, as so many businesses pivoted to over the last six months. No, she says. “We focus more on scrunchies then masks. Because this is a scrunchie business!” (I ask what else you could make with kokom scarf fabric; “you can make scrunchies,” Beaudry says. So that’s that.)

Happy Friday 🌸 it’s a perfect time to tie up your hair with your favourite Kokom Scrunchie and head on into the weekend 💕 @em.southwell is rocking her Kokom Desiree 🧡 #repost

So far, the scrunchies have been a hit — something that unquestionably delights Beaudry. “They don’t just buy one, they buy sometimes two or three,” she says. “Or, they buy a whole big box!”

“My favourite part is people sending us pictures, videos or messages saying they got them,” Beaudry says. She especially loves seeing people wearing them out and about in the world, on hikes or in their gardens. “When they take it to a really beautiful place, that makes me really happy.”

Got an idea for the next Ottawa business that deserves the spotlight? Email What's Up Wednesday HQ at kdelamont.freelance@gmail.com.

Ottawa Neighbourhood Study releases new COVID-19 infection map
Sep 28, 2020 3:32 PM
Comments
We welcome your feedback and encourage you to share your thoughts. We ask that you be respectful of others and their points of view, refrain from personal attacks and stay on topic. To learn about our commenting policies and how we moderate, please read our Community Guidelines.