"It’s definitely intimidating when you walk in and hang around these guys," DiPietro said after backing up Vancouver's Jacob Markstrom in Tuesday’s 3-2 loss to the Washington Capitals.
Feb 6, 2019 4:33 PM By: Sportsnet 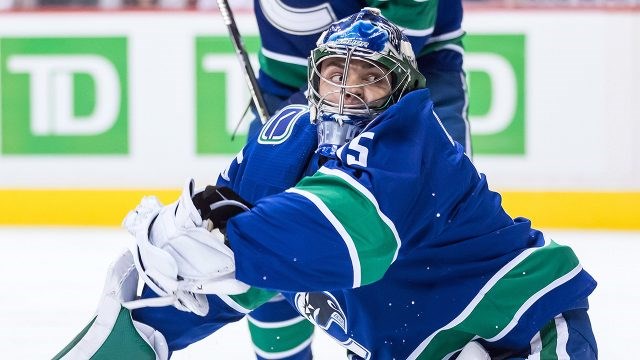 Ready or not, here he is.

Michael DiPietro has come to the National Hockey League about three years early, summoned from junior by the Vancouver Canucks amid a goaltending crisis for which the organization is partly responsible.

One of the Canucks' worst weeks has provided the 19-year-old one of his greatest moments: an unexpected early glimpse of the NHL - and an NHL paycheque - plus the chance to gather intelligence and experience that should help him land more permanent employment one day in the greatest league in the world.

Vancouver’s third-round pick from the 2017 entry draft joined the Canucks Tuesday in Washington after 23-year-old backup Thatcher Demko, another elite, more-polished prospect who has mentored DiPietro at summer camps, was injured the night before during the warmup in Philadelphia.

DiPietro is now suddenly a tweaked groin or bad sushi away from playing in the NHL. Canucks starter Jacob Markstrom, who presumably spent Wednesday’s day off in bubble wrap, makes his sixth straight start Thursday against the Chicago Blackhawks.

Demko, sent back to Vancouver for an MRI on his knee, could be out a couple of weeks. Amid the crucible of the playoff race, the Canucks have six games in the next 10 days, including back-to-backs next week in California against the Kings and Ducks.

Yes, this could get interesting.

"It’s definitely intimidating when you walk in and hang around these guys," DiPietro, who is from Amherstburg, Ont., said after backing up Markstrom in Tuesday’s 3-2 loss to the Washington Capitals. "But stepping on the ice, the puck’s the same size and the net’s the same size. The guys are just a little bit bigger. But it’s a cool experience."

"This is another step for me and it was definitely a cool opportunity stepping on that ice today and I'm soaking it all in." Mike DiPietro is excited to be up with the #Canucks. pic.twitter.com/uKsSGr3TWw

Understandably, DiPietro may be the only happy guy in the Canucks’ dressing room.

Despite playing well in Philadelphia and Washington, Vancouver lost both games by a goal. Worse, top defenceman Alex Edler suffered a concussion on a frightening fall against the Flyers. And Demko’s freak injury – this spring is supposed to be his grand NHL entrance – forced the Canucks to reach all the way down to the Ontario Hockey League’s Ottawa 67s to bring in a second goalie.

The team has been operating without a netminding safety net since veteran minor-leaguer Richard Bachman suffered a season-ending Achilles injury on Dec. 21 and his replacement, Mike McKenna, was lost on waivers to the Flyers on Jan. 4, a couple of days after the Canucks traded experienced backup Anders Nilsson to the Ottawa Senators to make room in the NHL for Demko.

In the month between losing McKenna to the Flyers and Demko to injury, Canucks general manager Jim Benning was unable to find a suitable goalie to provide depth for the organization.

On the Canucks’ farm team in Utica, goalie Ivan Kulbakov is playing on an American League contract and Michael Leighton is on a minor-league tryout.

"He’s a really good goalie, an up-and-coming guy," Canucks coach Travis Green said before the Capitals’ game. "It will be a good experience for him to even be here and be around our guys. I talked to him this morning. I don’t know how long he’s going to be here, but (I told him): ‘Enjoy it, get something out of it. You don’t want to just sit and watch everyone.’ He’s a good kid. He’s dialed right, he wants to do well. I think he’s going to be a good pro."

Just probably not yet.

"It’s just another learning curve for myself, another step forward," DiPietro said. "It’s definitely a cool opportunity, stepping on the ice and soaking it all in and just being around the guys. I’m just going to take it for the experience and what it is and just kind of soak it all in."

He was more victim than culprit in Team Canada’s failed world junior tournament campaign after Christmas. Under intense pressure and scrutiny at Rogers Arena in Vancouver, DiPietro posted a .952 save rate in four starts.

He was about to carry a flawed Canadian team to the medal round when in the final minute of regulation time in the quarterfinals, Finnish forward Eeli Tovanen shot the puck off the side of the net from an acute angle, then flipped the rebound off teammate Aleksi Heponiemi’s shin pad and watched the puck arc up and over DiPietro’s shoulder.

The Finns, who went on to win gold, couldn’t re-create that goal in 1,000 tries.

Before the tournament, DiPietro was traded to Ottawa by the Windsor Spitfires, with whom the netminder won a Memorial Cup in 2017 when he was named OHL goalie of the year.

It has been quite a winter for DiPietro.

"It’s been a whirlwind," he said. "It’s definitely unexpected, a lot of ups and downs. It definitely has been hectic and busy, but it’s something that’s been pretty cool and I’m really honoured to have this happen to me. Like I said, I’m just trying to take each experience that comes my way, day by day, and not really overthink it and just really enjoy it."