The data represents all cases of the virus reported between the start of the pandemic and August 31.
Sep 28, 2020 3:32 PM By: Mike Vlasveld 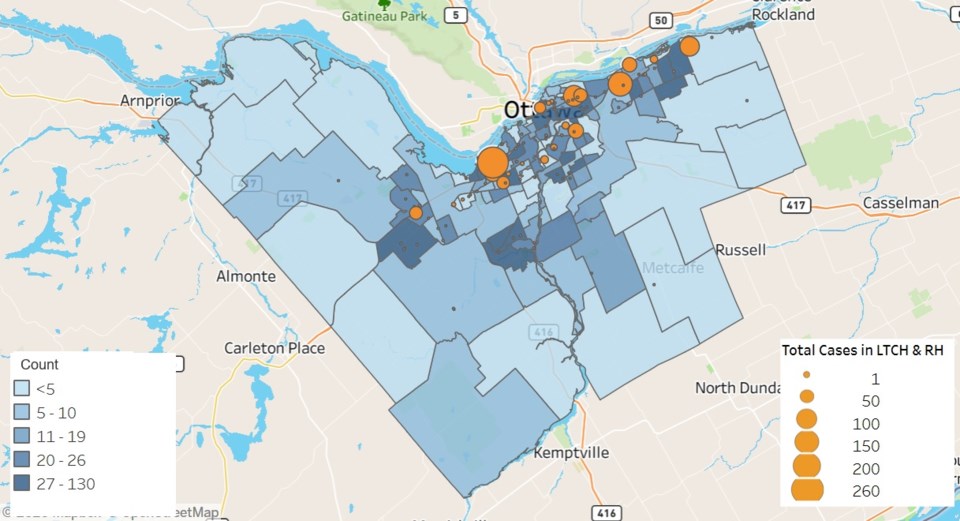 In the interest of transparency, Ottawa Public Health (OPH) has partnered with the Ottawa Neighbourhood Study (ONS) to share data on where cases of COVID-19 have popped up throughout the pandemic.

The ONS says its new interactive map provides a snapshot of the virus across all local neigbourhoods, clarifying that areas with lower or higher rates are not any more or less "safe" from COVID-19 transmission.

The map's data represents all cases reported between the start of the pandemic in March and August 31, and was extracted by Ottawa Public Health (OPH) from the OPH COVID-19 Ottawa Database. The numbers are also based on the neighbourhood that the infected residents live in, not necessarily where they "caught" the virus.

There are a few factors that the ONS says may be drive rates of COVID-19 in Ottawa neighbourhoods:

Rurality -- To account for differences in the size of urban and rural populations, rates (i.e. the number of COVID-19 cases per 100 000 population) are provided. Rates in rural neighbourhoods will be more sensitive to changes in the number residents with confirmed COVID-19 infection, as they have smaller populations.

Testing -- Provincial testing criteria have varied throughout the response and been limited to priority groups when laboratory capacity was more limited.  The number of reported confirmed community cases underestimates the actual number of infections. Testing rates are not uniform across the city: According to an ICES report, Ontarians who were tested were more likely than those not tested to live in marginalized neighbourhoods with greater residential instability, material deprivation and dependency, and lower income status.

Social determinants of health -- The social determinants of health, such as income and ethnicity, can contribute to differences in disease prevalence and health behaviours. According to an ICES report, Ontarians who tested positive for COVID-19 were more likely to live in lower-income neighbourhoods or neighbourhoods with a higher percentage of visible minorities and recent immigrants.

The map shows Ledbury-Heron Gate-Ridgemont as having the highest cumulative case count at 123, while Overbrook-McArthur had 73, followed by Old Barrhaven East with 54.