"The utilities and municipalities come out and provide that service for free to home-owners," said Ontario One Call Executive Director Ben Hamilton.
0
Mar 29, 2019 12:08 PM By: Taylor Millage 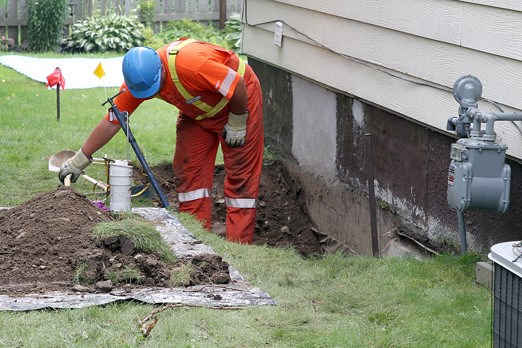 A Union Gas employee checks to ensure no more gas is leaking from a pipeline accidentaly nicked by a homeowner digging a trench at his McKibbin Street home. (Leith Dunick, tbnewswatch.com)

Even a project as small as digging a garden can be a risk to underground infrastructure, but more importantly, to a person's health.

That's the reason behind Ontario One Call's Dig Safe Month, launching April 1, which outlines the importance of identifying the location of underground infrastructure on local property.

Ontario One Call is a not-for-profit organization that facilitates excavation "locate" requests, to ensure homeowners, excavators and infrastructure owners are safe when digging.

Planting a tree? Digging a garden? Installing a fence? Be safe, #KWAwesome. Call or click @ON1Call to arrange a FREE underground cable locate before you dig. https://t.co/ffMwq4lhJV pic.twitter.com/QkRm0q58j6

"It's a time where we reach out to everyone who might be planting a tree, building a fence, putting in a pool or doing any major digging in their backyard to make sure that they call before they dig so they can be safe," said Ontario One Call Executive Director Ben Hamilton.

"Even on your private property there are still water lines, gas lines, telecom and electrical lines," he explained. "That's why it important to call. If you hit that infrastructure, you might have a loss of service but you might also be putting your health and the health of your neighbours at risk."

In 2012 the Ontario government declared it illegal to start digging projects without first arranging for a locate to be done.

Despite this, over the course of 2018, more than 5,000 incidents were reported across the province, totalling $667-million in damages.

The Ottawa region alone saw just over 400 incidents in 2017, which represents a 6 per cent increase from the previous year.

Hamilton said the increase was due to the large amount of work taking place in the region; projects like home-building, the expansion of transit and repairs to sewer and water lines all played a large role.

"It's a very busy time in Ottawa, like it is all across Ontario," explained Hamilton. "With that comes more risk of people damaging infrastructure."

Penalties for not arranging a locate can result in legal penalties and charges for civil damages from utility companies who's property was damaged.

"A lot of people are surprised when they learn their gas service might only be 18 inches below the surface and their telecom line might just be laying below the sod," he added.

Calling Ontario One Call is completely free, as well as the locate itself.

"When you submit your request we route that to all the utilities and municipalities who have infrastructure buried in your area," said Hamilton. "They'll come out and mark their infrastructure with paint. They'll also send you paper records which will help you understand what's buried in your property and make sure that you're able to avoid that when you're doing your excavation. Usually it takes five days for the locates to come and be provided to people, so make sure you build that into your timelines when you're planning a project; don't leave it to the last minute."