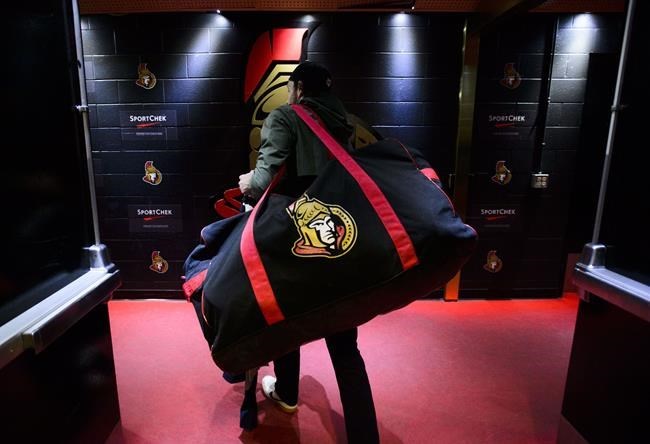 Ottawa Senators defenceman Mark Borowiecki is looking at the bright side.

As players cleaned out their lockers and prepared to go their separate ways following a last-place finish in the NHL standings, the one consistent message was that things would get better.

"Literally nowhere to go but up," Borowiecki said Monday. "With some of the guys that we have coming in, some of these young kids are going to be huge contributors for us, big impact players for a long time and now it's a matter of making sure that we help them along and help them reach that potential."

However, the reality of the dreadful season still weighs heavily on the Senators (29-47-6).

"This year we obviously set our own expectations, but from the outside ... we were expected to kind of be in this situation so it’s a little bit easier that way to have the mood as it is. But as individuals, we're not happy with the way we ended up," goalie Craig Anderson said. "We're competitors, we want to compete, we want to succeed and finish where we finished is not succeeding."

It was a season of upheaval right from the start of training camp when captain Erik Karlsson was traded to the San Jose Sharks. That was followed by a video being released by an Uber driver where players were overheard complaining about an assistant coach, the departures of Mark Stone, Matt Duchene and Ryan Dzingel at the trade deadline, as well as the firing of head coach Guy Boucher with 18 games remaining in the season.

“Not a lot of people go through what us young guys went through, or even guys on this team, in one year," admitted forward Colin White. "There were some big changes this year, but it's almost safe to say that I don't know if we'll go through that again in our career. You never know, but we fought through it and I think going through that ultimately is going to help us in the long run."

More changes are still to come, as a decision needs to be made on a head coach. Marc Crawford stepped in as interim head coach and will likely be one of numerous candidates vying for the position.

The Senators are also in the hunt for a president of hockey operations and decisions need to be made on a number of players.

The biggest question will be what the Senators decide to do with Ceci. The two sides went to arbitration last summer and the 25-year-old defenceman is looking for a long-term deal and a raise from the US $4.3 million he made this season.

"No one wants to go to arbitration even once, so going back again this summer would be tough to do," said Ceci. "Hopefully we don't get to that point.

Ceci was among those rumoured to be on the trade list at the deadline, but admitted his agent and general manager Pierre Dorion have held talks since then and is hopeful things can be resolved soon.

While Anderson has one year remaining on his deal, it's unclear what the plan is for his back-up. Nilsson was acquired from the Vancouver Canucks during the season and finished 11-11-0 in 24 games.

Mike Condon, who was injured most of the season, is also entering the last of his two-year deal, while Marcus Hogberg has been playing well with Belleville in the American Hockey League and could be ready to take the next step.

In addition to Hogberg, there are a number of prospects in Belleville who will be fighting for roster spots next year. The Senators saw great strides from Thomas Chabot in his second year as the defenceman led the team in points with 14 goals and 41 assists and thrived in a bigger role after the departure of Karlsson.

"I think there are some of us who didn't expect to take on such a big role at this age, but when certain guys got traded we realized this was the group going forward and we answered the challenge," Chabot said. "We know there's work to be done, but I think it will be exciting coming to camp and seeing who will be able to make this roster.”

White also proved he can be a Top 6 forward, but perhaps the most exciting development was the play of rookie Brady Tkachuk, who finished the season with a team-leading 22 goals and 45 points.

"You can't end (a season) without talking about Brady Tkachuk and how well he played and the kind of season that he had," said Crawford. "At the start of the season you wondered how he was going to play and ... he was arguably our best player at the end of the season and that’s remarkable for a 19 year old.”

Crawford has expressed his desire to return, but says he will accept whatever happens.

"The last year was a difficult year for our organization, but in some ways it was a real awakening maybe of our organization as well," said Crawford. "You had the worst of the worst probably and I thought you saw a lot of what the future has in store."

A number of players have been approached by their respective countries for the world championship next month in Slovakia.

Canada reached out to Chabot, but he's set to have an MRI on his foot and no decision will be made until he knows his health status, while Ceci admitted he wouldn’t feel comfortable participating, as he'll be without a contract.

Team USA approached both White and Tkachuk, but neither was ready to commit.