Karlsson will visit the Canadian Tire Centre in a Sharks uniform on December 1.
0
Sep 13, 2018 2:41 PM By: OttawaMatters Staff 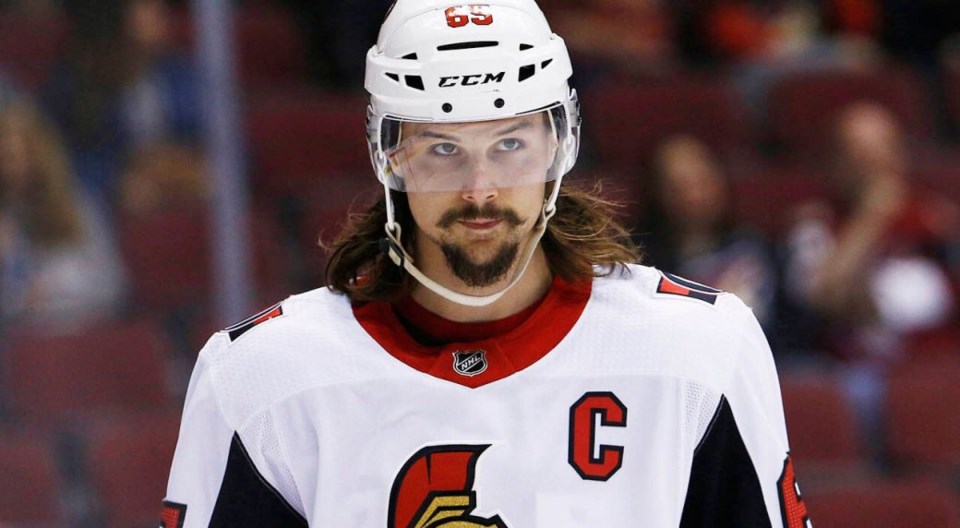 After a long summer of speculation, the Ottawa Senators have traded captain Erik Karlsson to the San Jose Sharks.

Karlsson had spent his entire career with the Senators since being drafted by the organization in 2008, 15th overall.

Listen to Erik Karlsson's reaction to the trade from a news conference at the Canadian Tire Centre:

The 28-year-old has won two Norris Trophies and has led Ottawa to within a goal of the Stanley Cup Final, ultimately losing in overtime of Game 7 to the Pittsburgh Penguins in 2017.

"Erik is an exceptional hockey player whose skills delighted our fans for the past nine years," said general manager Pierre Dorion. "We thank him for his dedication to hockey, and we wish him all the best."

"This is the right moment for us to rebuild our team, and shape our future with a faster, younger and more competitive team on the ice," he added. "We are going to build a culture of consistency which will allow this team to sustain better performance over the long term."

Karlsson has just one year remaining on his contract and is scheduled to hit unrestricted free agency on July 1. With the Senators organization unravelling over the course of the 2017-18 season and suffering significant turmoil this off-season, it appeared unlikely that the slick-skating blue-liner would be in Ottawa much longer.

Awful news. But I wish @ErikKarlsson65 well! Thanks for the memories and for sharing your incredible talent with our City and all of us @Senators fans. https://t.co/oZo8fkf0dp

Very sad to see @ErikKarlsson65 leave our City. He was always a tremendous leader on and off the ice. He and @MelindaCurrey will be very much missed. We thank him for 9 great seasons with the @Senators - All the best moving forward. #EK65

The Senators are entering a full rebuild, with owner Eugene Melnyk announcing his intentions to bring plenty of fresh faces into the lineup in the coming seasons during a sit-down interview with defenceman Mark Borowiecki released by the team earlier this week.

The Ottawa Senators are proud to share the vision for the future of our team and this organization. We are about to launch an exciting plan to rebuild our team and we are inviting you to be a part of our rise to new heights. #OttawaRising pic.twitter.com/hok2jYCUVi

The video only furthered speculation around Karlsson’s relationship with the team, as Melnyk did not include a single mention of the captain as he spoke of the club’s vision for the future.

Karlsson scored nine goals (his lowest full-season total) and registered 53 assists for 62 points in 71 games in 2017-18. In 627 career regular season games over nine seasons with Ottawa, he has tallied 126 goals and 518 points.

Thank you, Erik. You’ve been an exceptional member of the Ottawa Senators community both on and off the ice. We thank you for your dedication and wish you all the best. pic.twitter.com/h2VidKmSc1

The Senators will officially receive the following package of prospects and picks in exchange for Karlsson and minor league player Francis Perron:

- Centre Josh Norris (San Jose's 2017 19th overall draft choice)
- Forward Rudolfs Balcers
- Centre Chris Tierney
- Defenceman Dylan DeMelo
- San Jose's first-round choice in either 2019 or 2020 (not lottery protected); if the Sharks miss the playoff in 2018-19 it will be a 2019 selection, otherwise it will be in 2020.
- The Sharks' second-round choice in the 2019 draft (which will be the higher of the two picks the Sharks currently own);
- Two conditional picks:
- Should the Sharks sign Karlsson to a contract extension, Ottawa receives San Jose's second-round selection in 2021, which would upgrade to a first-round selection (not lottery protected) if San Jose reaches the Stanley Cup Final in 2019.
- If Karlsson is on an Eastern Conference roster (reserve list) during the 2018-19 season, the Senators will receive an additional first round pick from the Sharks no later than 2022.