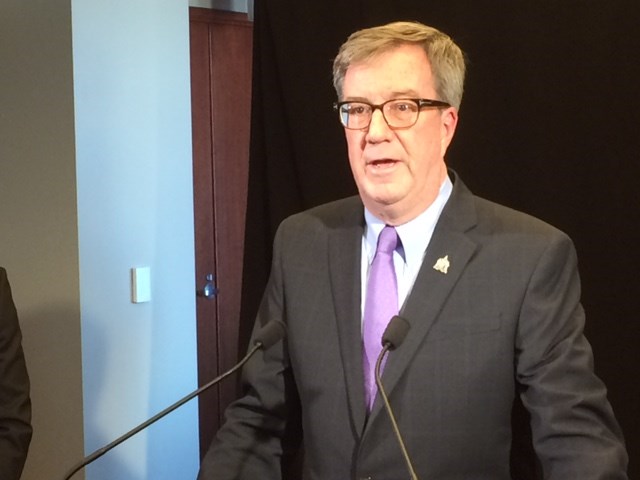 Ottawa Mayor Jim Watson speaks to the media at an announcement regarding the Lebreton Flats development, January 2018. (Photo/ Mike Vlasveld)

"I would like to congratulate Premier Designate Doug Ford for winning a majority of seats in the Ontario Legislature.

I would like to thank Premier Kathleen Wynne and the Ontario Liberal Government for all that they have done for the City of Ottawa over the last 15 years. The Wynne Government has been a good partner on a number of significant city building initiatives -- many of which would not have been possible without their support and co-operation.

Personally, I would also like to thank Kathleen Wynne, local members of the Government caucus as well as local MPPs who have not been re-elected, for their steadfast commitment to the residents of Ottawa. It is my opinion that the work accomplished through the recent partnership between our two levels of government is something to be proud of and I believe that - with the passage of time - these accomplishments will be viewed as both practical and productive -- with a clear focus on the people we serve.

I have said previously that there were policies in each of the Liberal, PC and NDP platforms that would be good for the city. I continue to feel optimistic about the future and I will be focusing on areas of common alignment with the new Progressive Conservative Government and Premier Designate Doug Ford.

I remain committed to building a productive working relationship with the new government, with a  strong mandate of delivering results for Ottawa residents. My hope is that the newly elected government continues and strengthens a strong partnership with the City of Ottawa. I truly believe that when the municipal, provincial and federal governments work together, much can be achieved. I trust that local MPPs will continue to act as strong advocates for their communities, regardless of what side of the legislature they are sitting on.

I am also appreciative that all three major parties fully supported our Phase 2 Light Rail Project and we look forward to breaking ground in 2019.

To Premier Designate Doug Ford I would like to say congratulations on your successful campaign."