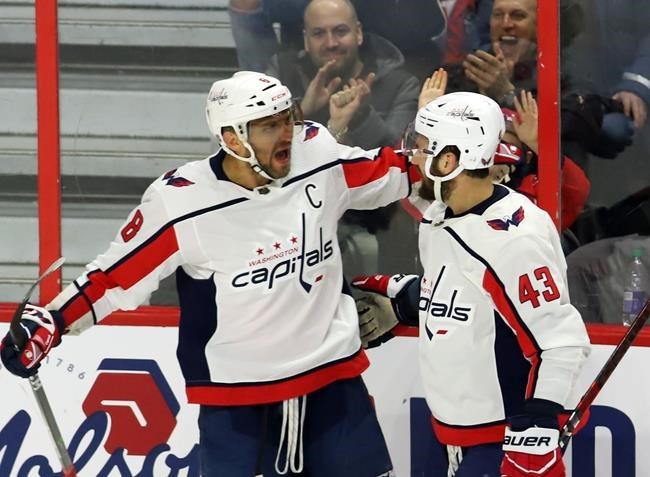 Ottawa fans gave Ovechkin a hearty cheer as he scored his 694th and 695th career goals in the Washington Capitals' 5-3 win over the Senators on Friday. Ovechkin's second-period goal, his 36th of the season, tied him with Mark Messier for eighth on the NHL's all-time goals list. He added an empty-netter with just seconds remaining to move into sole possession of eighth as the crowd chanted "Ovi! Ovi! Ovi!"

"Eight is a good number," the Capitals' captain said with a smile. "I would say it's nice to be in good company. There are a lot of legends up there."

Ovechkin is just 13 goals behind Mike Gartner for seventh on the NHL's all-time list. His 695 tallies have come in 1,135 career games.

Messier congratulated Ovechkin via a statement to the NHL.

"You have amazed us all with your skill, shot, and grit — a rare combination. But more importantly, you have inspired a generation of girls and boys with your passion to score and play the game," the statement said, in part.

Praise was being heaped on Ovechkin, who had 19 shots Friday, from both dressing rooms.

"You hate seeing it against you, but it's just incredible," said Thomas Chabot. "He's proven he's elite. He's one of the greatest of all time in the NHL to score goals."

Capitals coach Todd Reirdon said Washington is fortunate to have a player like Ovechkin.

"That's how special a player he is," Reirdon said. "We're lucky as coaches and players to see a guy chase an unbelievable record, and he hasn't stopped the last few games.

Despite the loss, Anisimov, who has played with Ovechkin on many Russian national teams, said he was happy for his countryman.

"He knows how to shoot the puck and, always, the puck always goes in," he said with a laugh.

Oshie opened the scoring for the Capitals by potting his 19th goal of the season just four minutes into the game. Kuznetsov banged home a loose puck seven minutes later to make it 2-0.

The Senators got on the board after Tierney scored shorthanded at 7:15 of the second period to cut Washington's lead to 2-1. Tierney's 10th goal of the year was the Senators' 12th short-handed goal of the season, which leads the NHL, and their fourth in the past three games.

Ovechkin ripped a snapshot from the right circle over the blocker of Hogberg at 10:27 of the second frame to make it 3-1.

Barely a minute after Ovechkin's first goal of the game the Senators answered, as Chabot unloaded a slapshot from just inside the blue line to put Ottawa within one.

After being out-shot 16-5 in the first period, the Senators responded with 17 shots of their own in the second, but its spirited effort couldn't keep up with the Capitals' firepower.

"We showed some resiliency for sure," said Ottawa coach DJ Smith. "We played hard and we didn't lay down. I thought we hung (Hogberg) out to dry in the first, but in saying that, they're a really good team.

"They make plays and there's a reason why they're one of the best teams in the league."

Just three minutes into the final frame, a Hagelin wristshot zipped past the glove of Hogberg to make it 4-2. Hagelin's fourth of the season came shorthanded.

Anisimov scored on the power play to pull the Senators to within one just over a minute later, but the late push wasn't enough to top the NHL's best team — especially when Ovechkin, who has now netted 11 goals in his last five games, is scoring at will.

"I had plenty of chances to score more," Ovechkin said. "But I'll take two and move forward."

Notes: Ottawa heads to Toronto to play the Maple Leafs Saturday night while the Capitals welcome the Pittsburgh Penguins on Sunday… Attendance was 14,279.