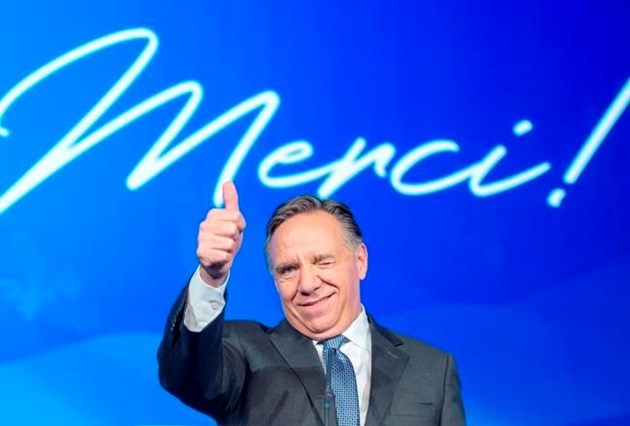 Quebec's premier says his government is looking at ways the state can more easily intervene in private homes to stop the spread of COVID-19, despite a law preventing police from entering a residence without a warrant.

Private gatherings are the main source of COVID-19 transmission in Quebec, Francois Legault said Wednesday, as the province reported 303 new infections and three more deaths attributed to the novel coronavirus. It marks the first time since early June the province has surpassed 300 daily confirmed infections.

"It's hard for the government, for the police, or whoever it is, to control the situation inside homes," Legault told a news conference. He said the Public Security Department and prosecutors and looking at ways the state can intervene more easily inside private dwellings.

The province permits private indoor gatherings of up to 10 people, while up to 250 people are allowed to gather indoors for a public, organized event.

"In Quebec, to get into a home it takes a warrant," Legault said. "So it's not so simple. But we aren't excluding anything at this moment ... It's not easy to intervene in homes, and obviously, there are a lot of homes."

The government has been sounding the alarm about private gatherings for weeks as COVID-19 infections rise across the province.

Julius Grey, a well-known constitutional lawyer in Montreal, says in his opinion, the government has room to manoeuvre.

While there are limits to the severity of the punishment, it's not excluded that meetings at home would be subject to government regulation on the subject of health, Grey said in an interview Wednesday.

"They're not going to go to everybody's house and knock on everybody's door and I think there would be a constitutional problem if they started random checking on people's homes," Grey said about the police. "But if there's a complaint, if there is noise ... they can come and verify and fine people if necessary."

Grey, who is currently representing a group of parents suing the provincial government for a remote-learning option for students, said under normal circumstances, the state has no business determining whom Quebecers can have over for dinner.

Quebecers can expect a certain degree of privacy, even during the COVID-19 pandemic, he said, "but at the same time it doesn't exclude the possibility of government intervention."

Authorities introduced a four-level, colour-coded COVID-19 alert system earlier this month — green for "vigilance," yellow for "early warning," orange for "moderate alert" and red for "maximum alert." But officials offered little detail on what each level would entail.

On Wednesday, Patrick Dery, a public policy analyst, released details about the alert system on social media. He did not say how he came to posses them.

Legault told reporters those leaked details were from "working documents" that are out of date. The documents, he said, "are possibilities, but that does not mean that all these measures are automatically applied, it will depend on each situation."

Liberal Health Critic Marie Montpetit told reporters, "It is not normal, in a pandemic situation, that there are these kind of documents circulating and that we learn about it on Twitter."

"I've spoken with premiers of other provinces, they have the same problem," Legault said. "What's happening in the past month is we have seen a very large increase in the number of new cases but no increase in hospitalizations and deaths."