Cardinal Creek residents have been living in garages and motels after encountering a number of construction issues in their new homes.
0
Aug 21, 2019 3:44 PM By: Jeff Slack 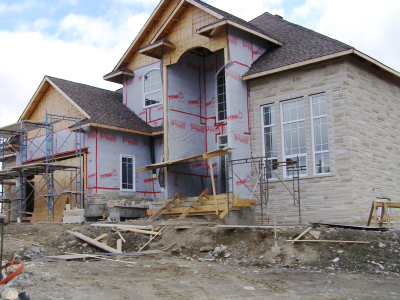 The City of Ottawa is investigating 15 homes in a new east Ottawa subdivision for suspected building violations after mold was found in a number of basements.

The situation in the Cardinal Creek neighbourhood has caused mental and financial strain on residents in the area who are unable to live in their newly purchased Tamarack homes.

NDP MPP for Ottawa Centre Joel Harden toured the area and called what he witnessed, 'shocking.'

"This is Canada. This shouldn't be acceptable," said Harden. "I think if anybody sells a defective product they should stand behind it, and I don't think the builder in this case has done so."

In addition to mold found in basements, one resident pointed out there was ice imbedded in a wall.

Tarion is the agency is in charge of directing the Ontario New Home Warranties Plan Act and regulating the province's home building industry.

The company has approved thousands of dollars for repairs to the Cardinal Creek homes, but the homeowners are still on the hook for covering some of the costs.

"[The Minister of Government & Consumer Services] Lisa Thompson has said Tarion is broken, and I don't think she's wrong about that," said Harden. "Half of Tarion's board is made up by the home building industry. I think, hardwired into the process here, you got some problems."

City of Ottawa Manager of Building Inspections and Enforcement John Buck wrote a statement regarding the situation in Cardinal Creek, saying out of the 15 homes that have been raised with Building Code Services, nine have now been satisfactorily resolved and work continues in respect of the remaining six. The statement also warned, however, that the 15 homeowners may still have "outstanding issues with Tarion" going forward.