Pierre-Luc Dubois scored two goals as the Columbus Blue Jackets beat the Ottawa Senators 6-2 in the season finale for both teams on Saturday.
0
Apr 7, 2019 8:55 AM By: Canadian Press 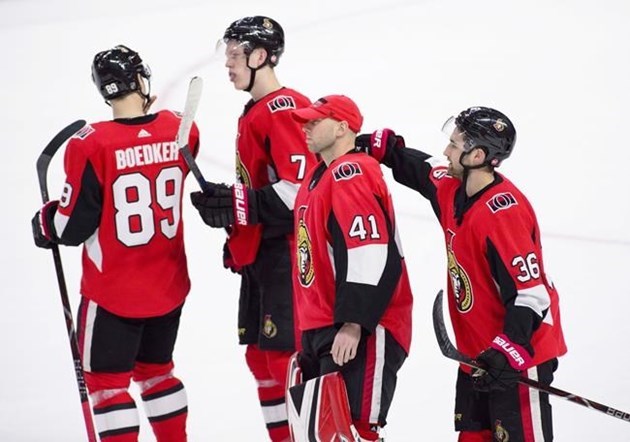 Pierre-Luc Dubois scored two goals as the Columbus Blue Jackets beat the Ottawa Senators 6-2 in the season finale for both teams on Saturday.

The Blue Jackets, who clinched a playoff berth with a 3-2 shootout win against the New York Rangers on Friday, finished with a 47-31-4 record and the second wild card in the Eastern Conference. They'll face the Tampa Bay Lightning in the first round of the playoffs.

Thomas Chabot and Mikkel Boedker scored for the Senators (29-47-6). Anders Nilsson stopped 17 shots after replacing starter Craig Anderson, who was pulled midway through the first after giving up three goals on seven shots.

The Senators finished last in the NHL standings for the first time in 23 years.

Nilsson started the third period with a great save on Cam Atkinson, which seemed to fire up his teammates briefly.

The Senators cut the Jackets' lead to 4-2 as Boedker, standing at the top of the crease, took a pass from Chris Tierney and wristed it past Korpisalo.

But a bad turnover by Boedker led to Bjorkstrand's second goal and Nash added an empty-net goal.

Trailing 3-0, the Senators finally got on the board midway through the second as Chabot beat Korpisalo with a backhand shot.

The Blue Jackets regained their three-goal lead as Texier scored his first career goal in just his second game.

Columbus opened the scoring just three minutes into the game as Dubois took a pass from Artemi Panarin and beat Anderson up high.

Midway through the first, Bjorkstrand slipped a puck through Mark Borowiecki's legs and dished it off to Nutivaara for his fifth of the season. Just over a minute later, some bad defensive coverage allowed Dubois to dig the puck out of the crease and beat Anderson for his second of the game.

NOTES: Ottawa's Ben Harpur missed his third straight game. The Blue Jackets opted to make goalie Sergei Bobrovsky a healthy scratch to give him the night off.