'Somebody needs to do this': Berlin doner wants to shake you out of your shawarm-addiction

Midweek Mugging: Two things that make Ottawa famous are shawarma and Shopify — and Wolf Down has a little bit of both in its DNA.
Mar 11, 2020 9:20 AM By: Kieran Delamont 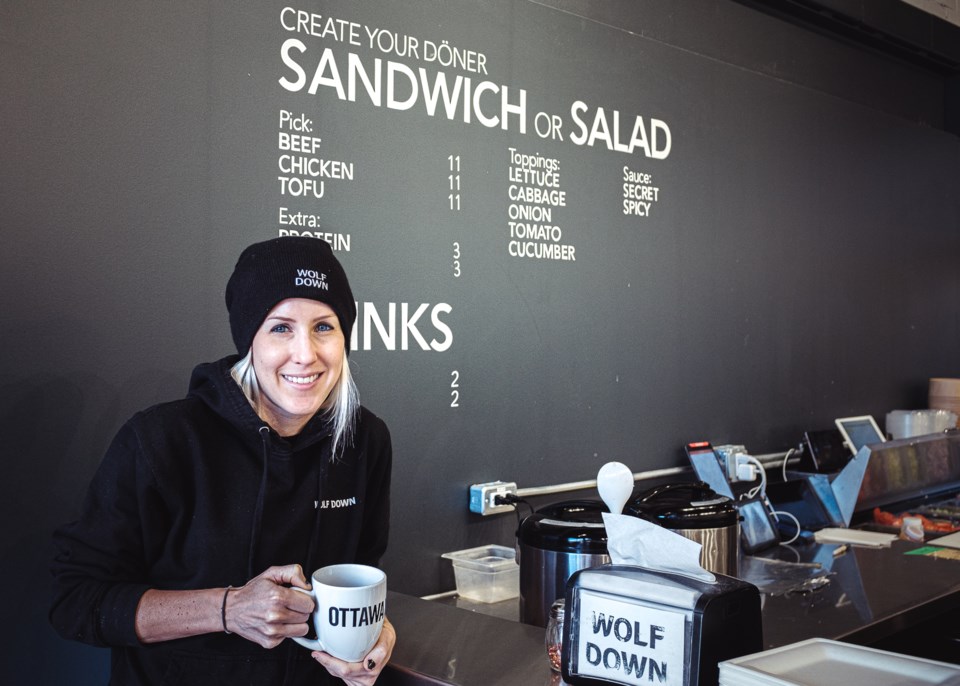 Joelle Parenteau, owner of Wolf Down, stands in front of the restaurant's (very lean) menu board. Kieran Delamont/OttawaMatters.com

Ottawa is a shawarma city, full stop. In the pantheon of distinctive Ottawa activities, from complaining about the Sens to groaning about the bus, nothing brings the city together quite like an Ottawa shawarma. Try to get one anywhere outside the city limits, and chances are it won’t be what you’re craving.

But — and I know that, for some, this will be hard to hear — there is more than one way to eat your meat.

Enter the Berlin doner (“doe-ner,” not “doe-nair,” by the way), a popular street food in Germany's capital city.

“My fiance is German, and Tobi’s German, and it’s like, the one thing they missed from back home,” says Joelle Parenteau. Last May, Parenteau opened Wolf Down on Bank Street, specializing in one thing and one thing only: the Berlin doner. 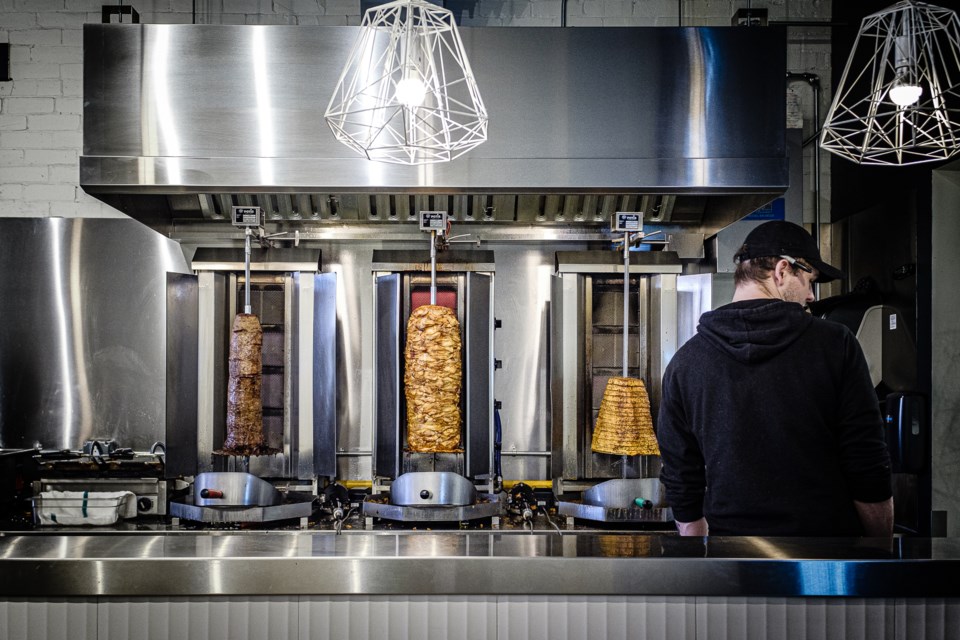 A Wolf Down employee in front of the restaurant's three meat spits. (Okay, two meat spits — the rightmost spit is tofu.) Kieran Delamont/OttawaMatters.com

So what makes a Berlin doner different than a shawarma?

“It has a lot in common,” she explains. Inside Wolf Down, you’ll see three meat spits, much like any shawarma joint in the city. In general, the meats share a lot of similarities, in terms of spice, style and ancestry: just like Ottawa shawarma is thought to have originated with Lebanese immigrants, Berlin doner was imported by Turkish people to the German capital.

Beyond that, though, the sandwiches diverge. “The bread is different, it’s a sourdough-like flatbread; all the veggies are fresh, not pickled; the sauce is lighter and fresher, it’s more about the herbs and the creaminess. Because every element is just kind of slightly tweaked, it has its own twists. When you taste it, the flavour profile, the texture profile, comes out completely differently.”

And yes, the Tobi Parenteau is talking about is none other than Tobi Lutke, founder of Shopify; Parenteau is engaged to Daniel Weinand, Shopify’s co-founder. Both are investors in the company, and were willing to back Wolf Down, seemingly in part so they could eat there. (As anyone who’s been to the grocery store hungry will know, the stomach can be a powerful financial motivator.)

“Since I’ve known them they’ve said we need doner in Ottawa, we love Ottawa and this is the one thing missing,” Parenteau says. “They were like, ‘we’ll pay, we’ll fund it, we don’t care. Somebody needs to do this.’ I thought no one’s going to do it, we know we have the funding, so what do we have to lose? Let’s go for it.”

Everything since then has been a learning process for Parenteau, who didn’t really have much of a restaurant background before starting the business and readily admits that she’s been figuring it out as she goes.

“We found some great kids who were eager and hungry, and we just figured it out every day,” says Parenteau. “I know how to run a business, so this is very much a different challenge. “A lot of restaurants struggle because they’re run by chefs who don’t know business; I’m the other way.” 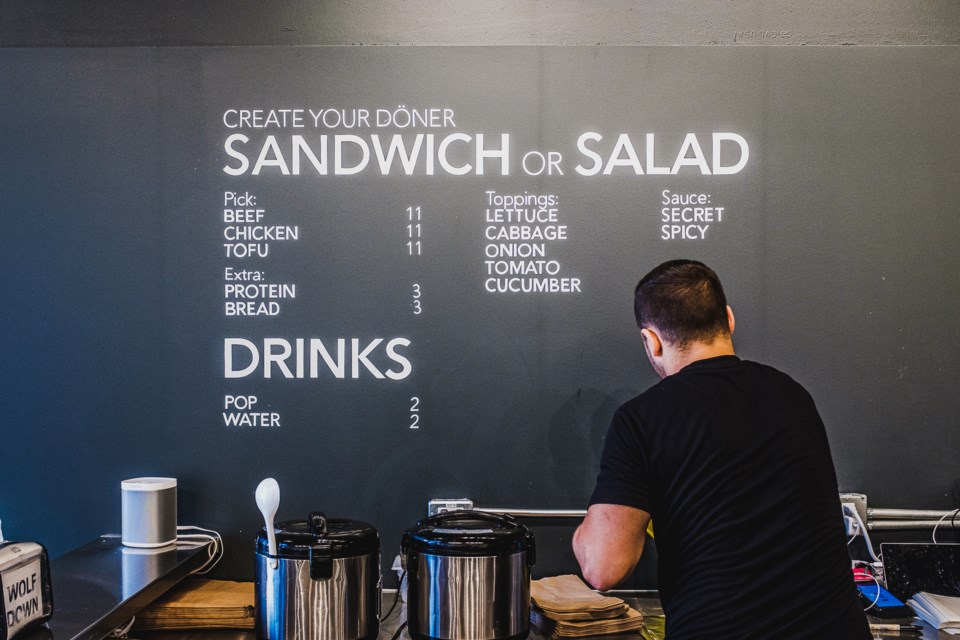 A Wolf Down employee assembles a doner. Kieran Delamont/OttawaMatters.com

Owing, perhaps, to her proximity to Shopify, Parenteau approaches Wolf Down like a startup. “You see it, that startup mentality,” she says. “One of the smallest menus in the city — that’s by design, very lean startup mentality. We like streamlining, we like efficiencies. This is all we do, and we’re going to do it the best we can.”

I wondered whether, in the city that often declares itself the shawarma capital of the world, if there was any pressure from the rotating meat gods weighing on Parenteau.

“I was aware, but I don’t pay attention to it,” she laughs. “I’m not ever worried about it. If this town could sustain this many shawarma shops, and we just make something a little bit different, that’s a good sign.”

The company is now setting up to expand, though their second store is set to open in the United States. For now, though, Parenteau is enjoying the thrills that come along with restaurant ownership.

“I like starting and creating things, but once they’re running I get bored very quickly,” Parenteau says. “So with this, I think opening new [stores] is going to keep me motivated and interested.”

And she hopes that, even here in Ottawa, that people might be willing to expand their horizons a little bit.

“Don’t take my word for it -- we have so many people come in and say ‘oh my god, this is better than shawarma,’” Parentau says. “Ask any German — they’ll say [doner] is better shawarma.”

Those are bold, provocative claims, to be sure. If nothing else, Parenteau hopes you’re willing to test them for yourself. And to all the Shawarma Princes, Princesses, Kings, and Palaces: better get ready to defend your crown.

Know a small business who we should feature? Email Midweek Mugging HQ at delamont.kieran@gmail.com with your suggestions. We'd love to check them out. 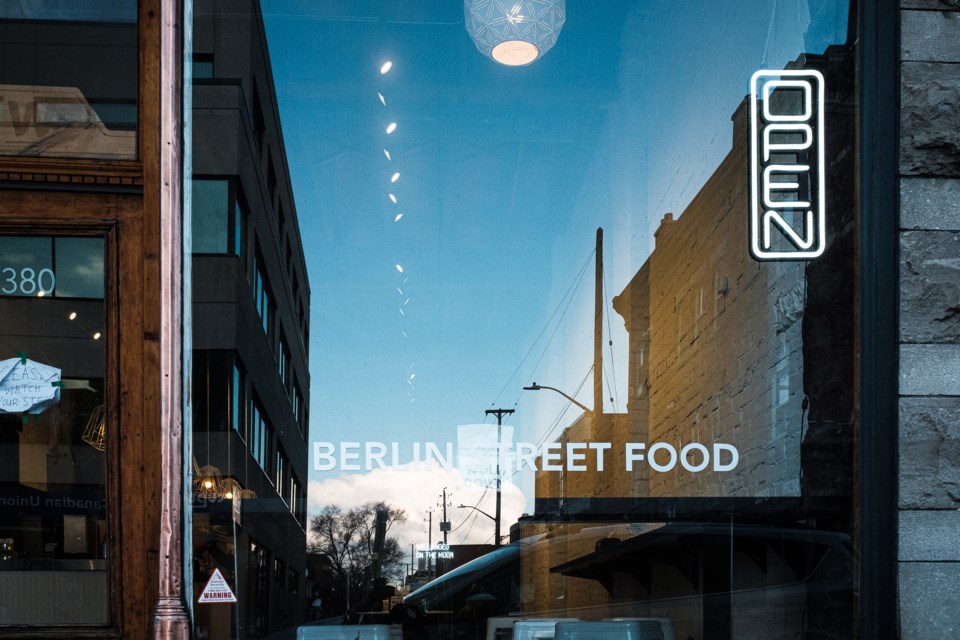 The exterior of Wolf Down on Bank Street. Kieran Delamont/OttawaMatters.com