The Recap: First debate night of the campaign, minus the Liberal leader 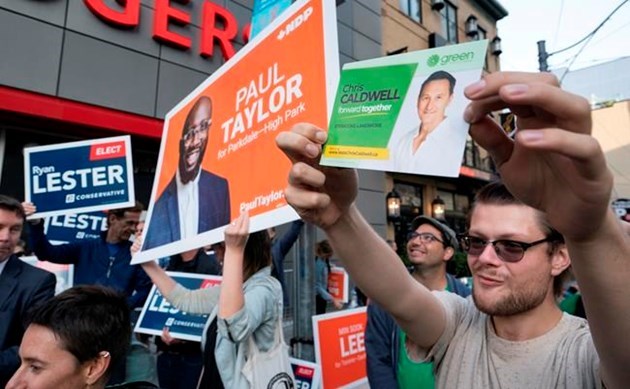 A play-by-play of the first leaders' debate of the federal election campaign (all times Eastern):

The first leaders debate of the federal election campaign has come to an end.

(At the start of the debate, the three leaders shook hands before May remarked that she'd almost forgot about the empty podium set up for Trudeau, walked up to it and said, "Good to see you," while shaking hands with no one.)

The debate ends with a back-and-forth between Scheer and May over policy towards Israel.

Scheer promises to de-fund a United Nations agency that helps Palestinian refugees, citing concerns about terrorism, while May says Israeli policy towards settlements in the West Bank are problematic for regional security.

May also likens Scheer to U.S. President Donald Trump, noting that like Trump, Scheer wants to move the Canadian Embassy in Israel to Jerusalem.

The three leaders are set to face reporters to put their own spins on the evening's events.

The federal leaders debate has turned to foreign affairs policy with questions about relations with China, Brexit, immigration and free trade.

The three leaders agree that Canada's problematic relationship with China should put the safety of two Canadians held in China first and foremost.

But they diverge on other matters, including over Brexit that Conservative Leader Andrew Scheer has supported.

Scheer says he believes in any country's right to determine its own fate, adding that it is up to the British to decide the next steps, amid a looming deadline that could see the country crash out of the European Union.

Singh takes aim at free trade, saying that any deal should ensure benefits go to people and workers

Green party Leader Elizabeth May says no party in this election, other than hers, has accepted the emission-reduction targets required to limit global warming.

She says she wouldn't prop up a minority government that didn't accept those targets.

NDP Leader Jagmeet Singh says the New Democrats believe the country can end fossil-fuel subsidies and invest in public transportation among other policies — the country just has to seize the opportunity, which is going to take bold conviction.

May tells Singh that he sounds almost like a Green, but he won't accept the targets necessary to limit global warming.

Singh has been targeting May in some of his attacks, including questioning the Greens' positions on Quebec separatism and women's right to abortion services.

The issues have dogged May during the nascent campaign period, but she says she won't go down the rabbit-hole with Singh and calls his comments absurd.

The federal leaders debate has turned to Indigenous issues, putting Conservative Leader Andrew Scheer in the crosshairs of Jagmeet Singh and Elizabeth May.

May and Singh say they would accept a human-rights tribunal ruling ordering the federal government to compensate Indigenous children and some family members harmed by underfunded on-reserve child-welfare systems.

They go after Scheer for not answering the question directly about accepting the ruling, which could cost more than $2 billion by one estimate.

Scheer refers to the SNC-Lavalin affair and Liberal Leader Justin Trudeau's involvement, then later says under the Conservatives the federal prosecution service would be allowed to independently decide whether to take the company to court on corruption charges.

Just before the break, Green party Leader Elizabeth May took aim at NDP Leader Jagmeet Singh's plan to provide dental care for all.

She says the party looked at such a plan, along with pharmacare, and believed it may be too costly to implement.

She questions how Singh's NDP could pay for it all, and notes the Greens would focus on target a dental care program to low-income.

The three leaders are also asked about Quebec's secularism law, Bill 21, but known suggest they would not intervene in a court challenge to the legislation if elected to govern.

May suggests she would look to find jobs for those people who are forced to leave Quebec because they can no longer work.

Conservative Leader Andrew Scheer and Green party Leader Elizabeth May say they would run governments that would live within their means.

Scheer says there are troubling signs that Canada could be headed into tough economic times, and warns there may not be enough fiscal room for the government to act.

Scheer says a Conservative government would balance the budget within five years.

Singh then takes aim at Scheer by bringing up the record of the previous Conservative government, saying a Tory government would cut services.

But after an intense back-and-forth, the three leaders agree on something: That Trudeau isn't at the debate because he's afraid of defending his record.

May quips that the trio can now sing "Kumbaya" and keep going with the debate.

Liberal Leader Justin Trudeau is making a pitch to Alberta voters while his opponents step onto a debate stage in Toronto for the first time this campaign.

At a rally in Edmonton, Trudeau says the rest of the country won't forget Alberta as it goes through tough economic times due to drops in oil prices.

Trudeau's rally started late, ensuring that it would overlap with the start of the Maclean's/Citytv leaders debate, where a podium remains open for him.

The first question of the debate is for Green Leader Elizabeth May on her promise of a "guaranteed living income."

May says the plan is very realistic, but will take some years to bring into place because of the need to set the payments at the right levels to cover the cost of living in different provinces and cities.

Conservative Leader Andrew Scheer is warning about adding tens of billions of dollars in new spending without finding money to pay for its and pivots to talking about Trudeau.

The three leaders taking part in tonight's election campaign debate have made their way into the Citytv building in Toronto.

Partisan supporters are holding signs, cheering and chanting outside the building, including a group of Maxime Bernier supporters holding a sign asking to get the People's Party leader into the night's debate.

Green Leader Elizabeth May was the first to arrive.

Conservative Leader Andrew Scheer arrived next, and stopped to speak with a reporter after getting off his campaign bus, to say he is ready to talk about the Tory plan.

He also took a dig at Liberal Leader Justin Trudeau for not showing up.

May, Scheer and NDP Leader Jagmeet Singh are taking part in the Maclean's/Citytv debate while Trudeau is scheduled to hold a rally in Edmonton.

No charges laid in crash near Embrun, says SIU
Jul 6, 2020 11:15 AM
Comments
We welcome your feedback and encourage you to share your thoughts. We ask that you be respectful of others and their points of view, refrain from personal attacks and stay on topic. To learn about our commenting policies and how we moderate, please read our Community Guidelines.