A letter signed by the families of the Humboldt bus crash victims asks the city to get the TSB involved.
Jan 15, 2019 7:00 AM By: Jenn Pritchard 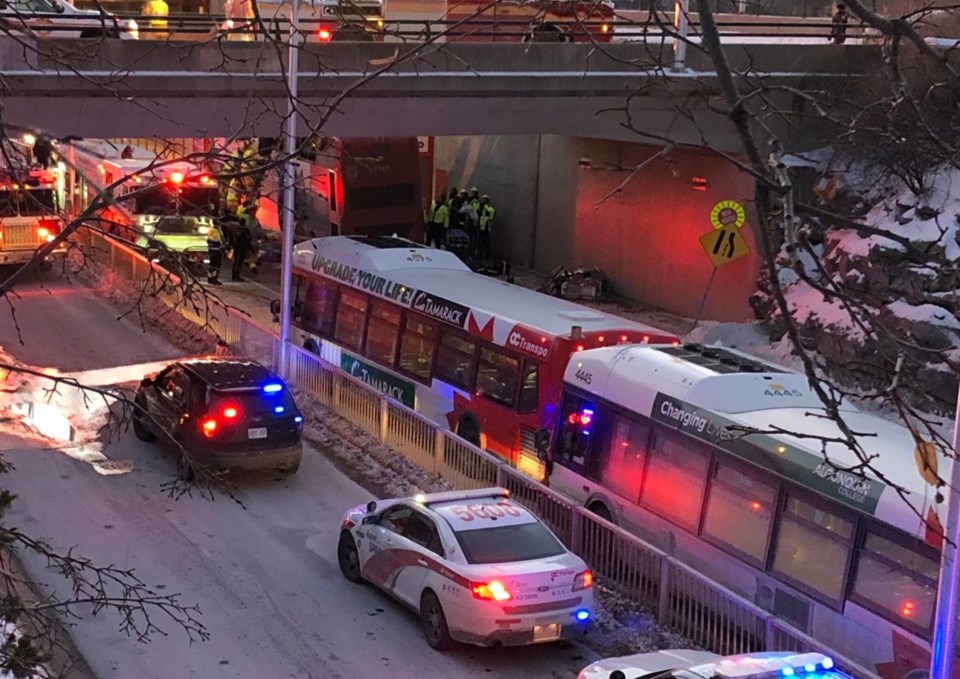 Bus crash at Westboro Station on the Transitway in Ottawa. Chris Kurys/ OttawaMatters

Experts are offering to lend a hand when it comes to the investigation into the Westboro bus crash.

Canada's Transportation Safety Board is weighing in and offering up technical experts for the investigation.

In a statement, the TSB noted that this crash brings up memories of the OC Transpo-VIA Rail crash in Barrhaven in 2013.

Following their investigation into the Barrhaven crash, the TSB issued a number of recommendations, including adding event data recorders, essentially black boxes, to city buses.

General Manager of Transportation Services, John Manconi, explained to 1310 NEWS that OC Transpo buses had other methods for data collecting after a crash.

He also warned that calling in the Transportation Safety Board would send a bad message.

"Quite frankly I think that leads to we don't have confidence in the Ottawa Police Service and nothing could be further from the truth," Manconi said. "Those accident investigators are leading experts. They do hundreds if not thousands of accidents investigations in Ottawa, they're professionals."

One national road safety group is also issuing a plea to have the TSB help investigate.

The letter also request that the TSB be called in to investigate alongside the Ottawa Police, who are in charge of the crash reconstruction efforts.

Ottawa's mayor, Jim Watson said on Monday that the TSB has no jurisdiction in this case and he is confident in the Ottawa Police investigation.

"I think it's really the expertise that our police service have in dealing with these kinds of collisions," he said. "I have full confidence that they will do a thorough investigation and when appropriate, release as much information as possible so we can ensure that this hopefully never happens again."

To read the letter from Vision Zero Canada, click here.