"We're going to give a good performance on Saturday, so [fans] can look forward to that," said forward Christiano François.
0
Apr 5, 2019 1:30 PM By: Taylor Millage 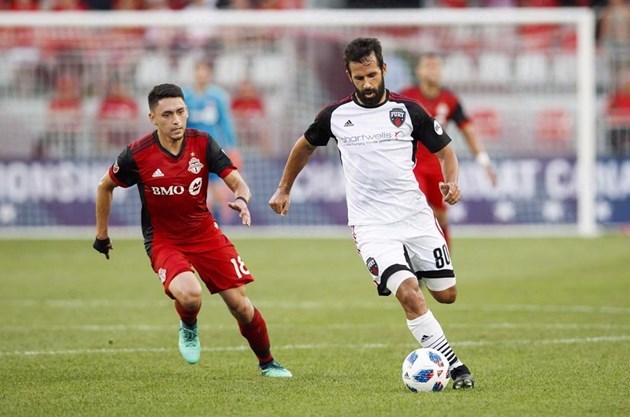 After a positive start to the 2019 regular season, Ottawa fury FC is excited to play in front of its own fans.

The team is feeling good after its first two away games; the first against Birmingham Legion, where they won 1-0, and a 1-1 draw against Charleston Battery.

Now it's ready to square off against Nashville SC at TD Place, Saturday, April 6, at 2 p.m.

Ottawa Head Coach Nikola Popovic is happy with where his team stands, so early in the season.

"[Nashville SC presents] a very very big challenge. As you know, we started very well -- we've been in Florida," said Popovic. "We were able to adapt our players to the first two games, and we had a fantastic start. Coming back these three weeks indoors is a big challenge, but since [Wednesday] we were able to come [to Ottawa] and prepare the team."

"I need to score," said François. "It's never taken me that long to get on the score sheet, so I think I'm looking forward to scoring in front of the fans and getting used to it here."

"Nashville brings some very good players," said Popovic. "It's going to be a very very good assessment for us to see how we can fight with these strong teams."

Midfielder Jérémy Gagnon-Laparé said that it's a big change, playing on home-turf after their preseason training down in Florida, and that it will play to their advantage, especially having a week to get used to the turf again.

Before the game starts, there will be a ceremony to honour former Fury FC player and Ottawa-native Eddie Edward, as he retires from an on-field position to a managerial role with the organization.

"We're going to give a good performance on Saturday, so [fans] can look forward to that," said François.

Atlético Ottawa to raise money for local food banks through branded facemasks
May 22, 2020 1:05 PM
Comments
We welcome your feedback and encourage you to share your thoughts. We ask that you be respectful of others and their points of view, refrain from personal attacks and stay on topic. To learn about our commenting policies and how we moderate, please read our Community Guidelines.