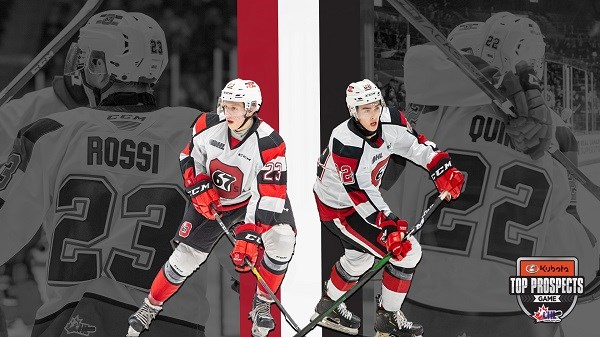 Ottawa 67's forwards Marco Rossi and Jack Quinn have been selected to the 40-man roster for the 2020 Kubota CHL/NHL Top Prospects Game.

Every year, the Canadian Hockey League's top prospects are selected to two separate teams in order to play a game, heavily attended by NHL scouts.

The 2020 edition of the game goes Thursday, January 16, in Hamilton.

Last season, 67's Graeme Clarke and Nikita Okhotyuk took part in this game before both being selected by the New Jersey Devils in the 2019 NHL Entry Draft; Okhotyuk was picked in the second round (61st overall), while Clarke heard his named called by the same club in the third round (80th overall).

Before the 67's head to Christmas break, Rossi, Quinn and the rest of their teammates will have to face the Oshawa Generals on the road on Friday, December 20.

Ottawa's next home game is set for Sunday, December 29. The Peterborough Petes visit for an afternoon clash.

Canadian Malcolm Shaw becomes the first forward to sign with Atletico Ottawa
Jun 26, 2020 9:18 AM
Comments
We welcome your feedback and encourage you to share your thoughts. We ask that you be respectful of others and their points of view, refrain from personal attacks and stay on topic. To learn about our commenting policies and how we moderate, please read our Community Guidelines.