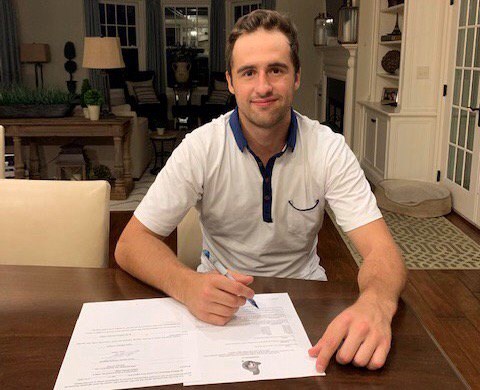 Colin White is set to be an Ottawa Senator for the next six seasons.

"We've identified Colin as one of our core young players who will help drive our team's success in both the short and long term," said Senators general manager Pierre Dorion. "Colin plays the 200-foot game that is so coveted in today's NHL. He can skate, play on both special teams and is a character player and leader who loves hockey and this city. While he is coming off a season where he finished among rookie leaders in many categories, we also know he is just scratching the surface of his potential in this league. We're very happy that Colin will be a Senator for the next six years."

In his first full NHL season, White scored 14 goals and added 27 assists for 41 points in only 71 games. His 41 points were fifth among all NHL rookies, while his 27 assists were third and his 14 goals ranked seventh. He became only the eighth player in Ottawa Senators history to score 40 or more points in his rookie season.

In 94 career NHL games he has scored 16 goals and added 31 assists for 47 points. White also appeared in one playoff game in 2017 during Ottawa's run to the Eastern Conference Final.

White's six-year contract has an average annual value of $4.75 million, with the following breakdown:

Four more Ottawa Senators test positive for COVID-19, but have since recovered
Apr 1, 2020 3:03 PM
Comments
We welcome your feedback and encourage you to share your thoughts on this story. We ask that you be respectful of others and their points of view, refrain from personal attacks and stay on topic. To learn about our commenting policies and how we moderate, please read our Community Guidelines.