HALIFAX — Two things are keeping Brenda O'Reilly’s restaurants in Newfoundland and Labrador afloat: Government subsidies and patios. “Patios have been a real godsend,” the owner of four St. John’s restaurants said in an interview Friday.
Sep 25, 2020 4:09 PM By: Canadian Press 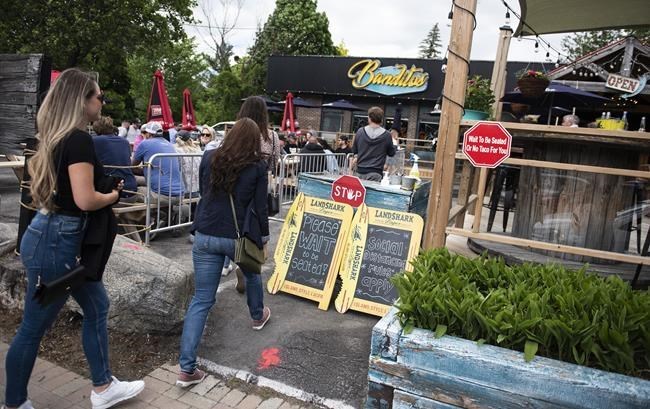 “Patios have been a real godsend,” the owner of four St. John’s restaurants said in an interview Friday. “They’re the reason I can even smile.”

Canada’s restaurant industry is bracing for the impact of patio closures as cold weather arrives, with experts saying the loss of open-air seating could be devastating.

With pandemic restrictions limiting indoor seating to 50 per cent of maximum capacity, many restaurant operators are coming up with ways to keep patios open longer.

O'Reilly said she has solar heaters and is asking diners to BYOB: Bring Your Own Blanket.

“Everyone knows it's safer to be outside,” said O'Reilly, whose restaurants include O’Reilly’s Irish Newfoundland Pub and Yellowbelly Brewery and Public House.

“We’re looking at ways to extend our patio season through the fall,” she said, noting that they’re planning to decorate the patios for Christmas.

“But at some point, we’re going to get cold and it’s going to snow.”

Food service experts say without targeted government aid, the combination of reduced seating capacity from shuttered patios and a potential second wave of COVID-19 could cripple the industry.

David Lefebvre, vice-president of Restaurants Canada, is calling on Ottawa to directly support the industry through meal subsidies.

“We’ve seen this rolled out in the U.K. where basically the government picks up half the tab for a meal during off-peak hours,” Lefebvre said. “The idea is not to subsidize diners, but to subsidize the restaurants.”

He added: “Restaurants are really in dire straits. This would give a helping hand to struggling businesses.

Sylvain Charlebois, professor of food distribution and policy at Dalhousie University, agreed that more targeted aid is needed for the food service industry.

But he dismissed the meal subsidies as “food stamps for the rich.”

The province’s Explore NB Travel Incentive Program allows New Brunswickers to apply for a 20 per cent rebate on eligible expenses, including food and drinks at restaurants, up to $1,000.

“It’s about empowering consumers to get out, spend money and deduct some of their expenses,” Charlebois said.

“When people go out to eat, they’ll buy other things and stimulate the economy.”

Lefebvre said the bottom line is restaurants need a lifeline to make it through the winter in a pandemic.

He said about 10 per cent of the industry is already shut down – close to 10,000 restaurants across the country. Without further support, he said the industry group expects that could climb by another 30 per cent.

“We have a high percentage of independent, family-operated restaurants that can’t take on more debt,” Lefebvre said. “It will be dark times ahead if we don’t see more support.”

O'Reilly said that staying open is good for the mental health of her workers, the general public and the economy.

"I've got to keep my staff working, keep the economy going and keep people from going crazy," she said. "It's not good for your psyche to see everything closing down."

O'Reilly added: "People's mental health is very fragile right now, including mine. I need to be working, I'm not built to not work. I need to keep my businesses going."

This report by The Canadian Press was first published Sept. 25, 2020.

Walmart sues US in pre-emptive strike in opioid abuse battle
Oct 22, 2020 7:46 PM
Surging lumber prices prompt record segment profits and surging third-quarter results
Oct 22, 2020 7:24 PM
Comments
We welcome your feedback and encourage you to share your thoughts. We ask that you be respectful of others and their points of view, refrain from personal attacks and stay on topic. To learn about our commenting policies and how we moderate, please read our Community Guidelines.