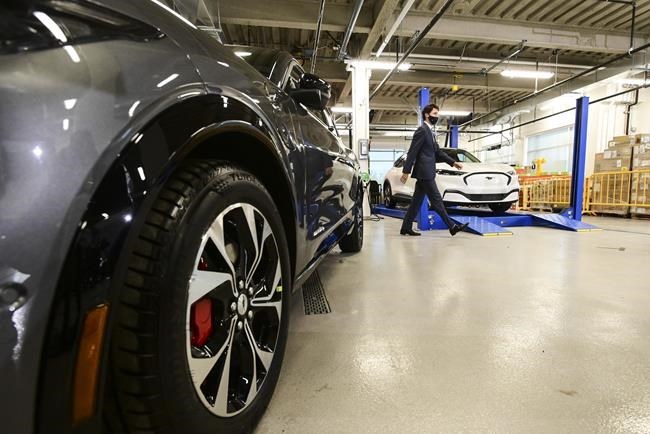 Last month, the federal and Ontario governments announced they will each contribute $295 million to help Ford Canada produce electric vehicles in Oakville, Ont., while also vowing to help Fiat Chrysler in its plans to invest up to $1.5 billion at its Windsor, Ont., plant.

Meanwhile, Elon Musk, CEO of EV manufacturer Tesla, has promised big contracts for miners around the world who increase nickel production for the batteries his vehicles are soon going to need.

"We are pretty excited about these recent announcements regarding electrification because there's absolutely no reason why Canada can't be a bigger supplier going forward of these critical materials,” said Pierre Gratton, CEO of the Mining Association of Canada, in an interview.

“But we're going to have to find them and mine them."

More than $1 trillion of investment will be needed in key energy transition metals — aluminum, cobalt, copper, nickel and lithium — over the next 15 years just to meet the growing demands of decarbonization if global warming is to be kept to less than two degrees by 2050, according to a recent report by consultancy firm Wood Mackenzie.

That’s almost double the figure invested over the previous 15 years.

Canada is well-endowed with copper, aluminum and nickel resources and could attract some of those investment dollars, says report author Julian Kettle, Wood Mackenzie's vice-chairman of metals and mining, but it faces the same price-related issues as the rest of the world.

"The price levels for a whole range of mined commodities are below the incentive price level, and some by a large margin," he said in an interview.

“"The energy transition starts and ends with metals — but the caveat is, not just yet."

The cost of electric vehicles is expected to decline to reach parity with internal combustion vehicles in 2024 and 2025 and consumer demand could skyrocket in a very short period of time, Kettle said.

The trouble is that planning, designing and building a mine takes five to seven years, plus the time to satisfy regulators, he added.

Canada is considered the fifth largest producer of nickel, with output of about 181,000 tonnes in 2019, up from 157,000 in 2010, according to Natural Resources Canada, which estimates about three per cent of the world's reserves are in Canada.

There are dozens of proposals to build lithium mines in Eastern Canada and to sift lithium from oilfield brines in Alberta but Canada's only operating mine, North American Lithium in Quebec, was shut down in 2019 and is being marketed in a court-supervised process after the owner declared insolvency.

Last March, Quebec set aside $90 million over five years in its budget for development of “critical and strategic minerals” such as lithium, cobalt, graphite, rare earth elements, niobium and titanium.

The risks of investing in metals mining are well-known at Sherritt International Corp., which mines for cobalt and nickel in Cuba and processes the metal at a refinery in Alberta.

The Toronto-based company concluded a court-supervised restructuring in August that allowed it to finally get out from under crushing debt resulting from an ill-timed investment in the Ambatovy nickel mine in Madagascar in 2007, said CEO David Pathe.

Demand for nickel and cobalt for batteries is expected to increase, Pathe said, but new mines aren't likely to be greenlighted until nickel rises from today's prices of around US$7 per pound to $10 or $12.

China's is also growing its control of the global nickel market, Kettle said.

"For the Chinese it doesn't matter. They're not worried about returns. They just want to secure the metal," he said.

The mining association has called for more money for CanmetMining, the main research arm of Natural Resources Canada. It also wants a $250-million fund created to focus on building northern infrastructure to allow more electrification of mining there.

"The biggest issue for us is that Canada is a vast country," says Gratton. "We have known deposits but they're remote, they lack infrastructure, and they're just not economic."

This report by The Canadian Press was first published Nov. 8, 2020

Companies in this story: (TSX:S)

Retailers ask Ontario government to lift COVID restrictions they aren't working
Dec 1, 2020 10:49 PM
Comments
We welcome your feedback and encourage you to share your thoughts. We ask that you be respectful of others and their points of view, refrain from personal attacks and stay on topic. To learn about our commenting policies and how we moderate, please read our Community Guidelines.