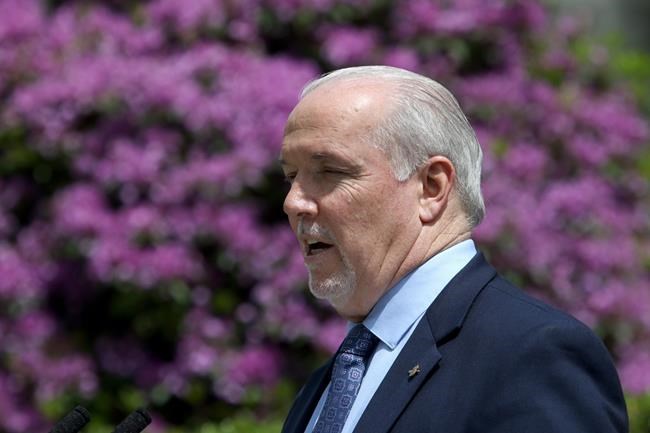 He said B.C.'s successful efforts to slow the spread of COVID-19 and the willingness of people to spend more time out in public leave him optimistic.

Horgan made the comments ahead of new job numbers due Friday and before next week's provincial fiscal update.

The federal government's fiscal update Wednesday forecast a deficit of more than $343 billion and up to two million people unemployed.

Despite the size of the federal deficit, Horgan said he will work to keep financial hurdles from standing in the way of B.C.'s recovery plans.

He said the number of passengers on transit and ferries is growing, and television and movie productions have restarted, as well as restaurants serving more customers.

"We've seen successes, more and more people are coming out of their homes participating in the economy, going to restaurants, shopping in retail outlets and participating, broadly speaking, in the restart of our economy," Horgan said.

B.C. announced the easing of more restrictions on businesses, recreation and travel last month in a gradual move to a third phase of its recovery plan.

The move permitted hotels, motels, spas, resorts, hostels, RV parks, provincial campgrounds and the film industry to resume operations after being shut down or restricted since March.

"People are adapting," Horgan said. "People are finding ways to make do in this extraordinary time."

The province announced 20 new cases of COVID-19 on Thursday and no new deaths, bringing the total number of cases to 3,028.

Provincial health officer Dr. Bonnie Henry said the government is preparing a couple of contingency scenarios for a possible second wave of COVID-19 with data collected in British Columbia.

"The whole plan ... is making sure that we don't ever have to go back to shutting everything down like we did in March," she told a news conference.

Health officials know more about the virus now, so they can adapt the way the health-care system reacts, Henry said.

— With files from Hina Alam in Vancouver.

This report by The Canadian Press was first published on July 9, 2020.

S&P/TSX composite fall as price of gold drags down materials sector
Aug 11, 2020 4:59 PM
Comments
We welcome your feedback and encourage you to share your thoughts. We ask that you be respectful of others and their points of view, refrain from personal attacks and stay on topic. To learn about our commenting policies and how we moderate, please read our Community Guidelines.