NEW YORK — Sir Harold Evans, the charismatic publisher, author and muckraker who brought investigative moxie to the British press, newsmaking dash to the American book business through bestsellers like “Primary Colors” and synergetic buzz to all as a
Sep 24, 2020 11:08 AM By: Canadian Press 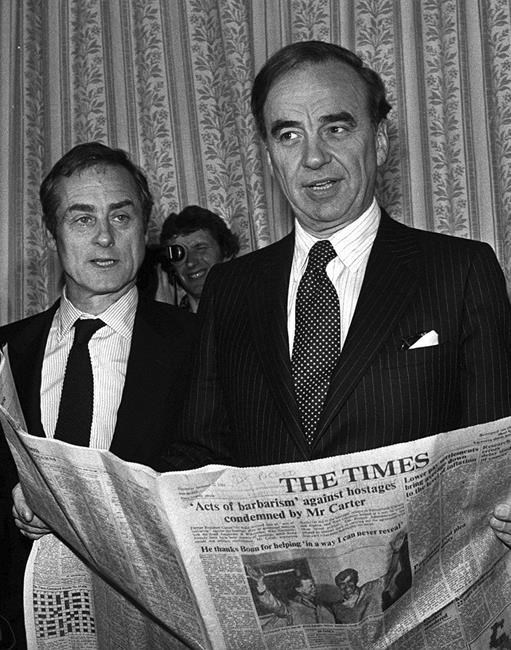 NEW YORK — Sir Harold Evans, the charismatic publisher, author and muckraker who brought investigative moxie to the British press, newsmaking dash to the American book business through like “Primary Colors” and synergetic buzz to all as author-publisher Tina Brown’s husband, has died. He was 92.

Brown said he died Wednesday in New York of congestive heart failure. She added that there would be a “very small" family funeral, and, depending on the status of the coronavirus pandemic, a celebration next June in London.

“He was the love of my life," Brown wrote Thursday in an email to The Associated Press. “His magical optimism lifted up our family every day he was alive and I could have achieved nothing without him by my side.”

A vision of British erudition and sass, Evans was a high-profile go-getter, starting in the 1960s as an editor of the Northern Echo and the Sunday Times of London and continuing into the 1990s as president of Random House. His marriage to Brown was a paradigm of media clout and A-list access that helped shape the book and magazine markets for years and helped embody the term “synergy” for businesses reinforcing each other.

A defender of literature and print journalism well into the digital age, Evans was one of the all-time newspaper editors, startling British society with revelations of espionage, corporate wrongdoing and government scandal. In the U.S., he published such attention-getters as the mysterious political novel “Primary Colors” and memoirs by such unlikely authors as Manuel Noriega and Marlon Brando.

He was knighted by his native Britain in 2004 for his contributions to journalism.

“Harold Evans was a true genius. I know of no one else who had the range he had with words — as crusading editor, thoughtful writer, book publisher, book author and most importantly in energetic conversation," Bob Woodward wrote in an email Thursday to the AP.

He held his own, and more, with the world’s elite, but was mindful of his working class background: a locomotive driver’s son, born in Lancashire, English, in 1928, and evacuated to Wales during World War II. After serving in the Royal Air Force, he studied politics and economics at Durham University and received a master’s in foreign policy. The drive to report, to expose, dated back to his teens, when he discovered that newspapers had wildly romanticized the Battle of Dunkirk between German and British soldiers.

“A newspaper is an argument on the way to a deadline,” he once wrote. He was just 16 when he got his first journalism job, at a local newspaper in Lancashire, and after graduating from college he became an assistant editor at the Manchester Evening News. In his early 30s, he was hired to edit the Daily Echo and began attracting national attention with crusades such as government funding for cancer smear tests for women.

He had yet to turn 40 when he became editor of the Sunday Times, where he reigned and rebelled for 14 years until he was pushed out by a new boss, Rupert Murdoch. Notable stories included publishing the diaries of former Labour Minister Richard Crossman; taking on the manufacturers of the drug Thalidomide, which caused birth defects in children; and revealing that Britain's Kim Philby was a Soviet spy.

“There have been many times when I have found that what was presented as truth did not square with what I discovered as a reporter, or later as an editor, learned from good shoe-leather reporters,” he observed in “My Paper Chase,” published in 2009. “We all understand in an age of terrorism that refraining from exposing a lie may be necessary for the protection of innocents. But ‘national interest’ is an elastic concept that if stretched can snap with a sting.”

Meanwhile, Evans became infatuated with an irreverent blonde just out of Oxford, Tina Brown. Their initial communication was comedy worthy of Brown’s society reportage. Evans came upon some writings by a Tina Brown that so impressed him he contacted the author, only to learn that “Tina Brown” was short for Bettina Brown, his future wife’s mother.

The then-married Evans would soon meet the proper “Tina,” and began a long-distance correspondence (He in London, she in New York), that grew intimate enough for Evans to “fall in love by post.” They were married, in East Hampton, New York, in 1981. The Washington Post’s Ben Bradlee was best man, Nora Ephron among the guests.

With Brown, Evans had two children, adding to the three children he had with his first wife, Enid Parker.

Their garden apartment on Manhattan’s exclusive Sutton Place became a mini-media dynasty: He the champion of justice, rogues and belles lettres, she the award-winning provocateur and chronicler of the famous — as head of Tatler in England, then Vanity Fair and The New Yorker, and as author of a book about Princess Diana.

Evans emigrated to the U.S. in 1984, initially serving as editorial director of U.S. News & World Report, and was hired six years later by Random House. He published William Styron’s account of his near-suicidal depression, “Darkness Visible,” and winked at Washington with “Primary Colors,” a roman a clef about then-candidate Bill Clinton that was published anonymously and set off a capitol guessing game, ended when The Washington Post unmasked magazine correspondent Joe Klein.

Evans had a friendly synergist at The New Yorker, where Brown serialized works by Monica Crowley, Edward Jay Epstein and other Random House authors. A special beneficiary was The New Yorker's Jeffrey Toobin, who received a Random House deal for a book on the O.J. Simpson trial that was duly excerpted in Brown’s magazine. Toobin would joke that he had become a “wholly owned” subsidiary of the Evans-Brown franchise.

Evans took on memoirs by the respected — Colin Powell — and the disgraced: Clinton advisor and alleged call girl client Dick Morris. He visited Noriega's jail cell in pursuit of a memoir by the deposed Panamanian dictator. In 1994, he risked $40,000 for a book by a community organizer and law school graduate, a bargain for what became former President Barack Obama’s “Dreams from My Father.”

Evan's more notable follies included a disparaged, Random House-generated list of the 100 greatest fiction works of the 20th century, for which judges acknowledged they had no idea how the books were ranked, and Brando’s “Songs My Mother Taught Me.”

As Evans recalled in “My Paper Chase,” he met with Brando in California, first for dinner at a restaurant where the ever-suspicious actor accused Evans of working for the CIA. Then they were back at Brando’s Beverly Hills mansion, where Brando advocated for Native Americans and intimated that he had sex with Jacqueline Kennedy at the White House.

After a follow-up meeting the next afternoon — they played chess, Brando recited Shakespeare — the actor signed on, wrote what Evans found a “highly readable” memoir. He then subverted it by kissing CNN’s Larry King on the lips, “stopping the book dead in its tracks,” Evans recalled.

Evans left Random House in 1997 to take over as editorial director and of Morton B. Zuckerman’s many publications, including U.S. News & World Report and The Atlantic, but stepped down in 2000 to devote more time to speeches and books.

More recently, he served as a contributing editor to U.S. News and editor at large for the magazine The Week. In 2011, he became an editor-at-large for Reuters. His guidebook for writers, “Do I Make Myself Clear?”, was published in 2017.

“I wrote the book because I thought I had to speak up for clarity,” he told The Daily Beast at the time. “When I go into a cafe in the morning for breakfast and I’m reading the paper, I’m editing. I can’t help it. I can’t stop. I still go through the paper and mark it up as I read. It’s a compulsion, actually.”

Walmart sues US in pre-emptive strike in opioid abuse battle
Oct 22, 2020 7:46 PM
Surging lumber prices prompt record segment profits and surging third-quarter results
Oct 22, 2020 7:24 PM
Comments
We welcome your feedback and encourage you to share your thoughts. We ask that you be respectful of others and their points of view, refrain from personal attacks and stay on topic. To learn about our commenting policies and how we moderate, please read our Community Guidelines.